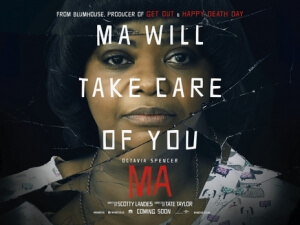 BASICALLY…: A lonely woman (Spencer) attempts to make friends with a group of high school students – but it soon transpires that she has more sinister intentions…

As kids, we have always been taught to never take treats from the seemingly nice stranger… however, if that stranger happens to be Octavia Spencer and the treat she’s offering is not only booze but also a cool place to drink it in, then it doesn’t matter if she’s a deranged maniac with a thirst for blood, because you’d be foolish to turn that invitation down.

Spencer is indeed playing someone with a sinister appetite for partying in Ma, which sees her reunite with director Tate Taylor after he directed her to an Oscar for The Help, and is a very silly but frightfully entertaining horror-thriller that’s made even more fun by how much the actress completely throws herself into the madness of her role.

Her character’s proper name is Sue Ann, and is a vet assistant who is approached by a group of high school students that want her to buy booze for them. She complies, and soon invites the young group – among them the newest arrival in town Maggie (Diana Silvers) – to her house where they can use her basement as somewhere to drink and chill in peace, which the young people – being the young, dumb and immature people that they are – heartily take her up on. Soon, Sue Ann – nicknamed “Ma” by her younger peers – has made her basement the hottest joint in town for teenage partying and drunken debauchery, but when Maggie and her friends begin to feel uncomfortable about Ma’s consistent bombardment on their lives, an uglier and more sinister side to the kindly older woman begins to show, especially as we see through flashbacks her own days as a teenager, when she was at school with some of the present teens’ parents including Maggie’s mother Erica (Juliette Lewis) and kindly Andy’s (Corey Fogelmanis) more boisterous father Ben (Luke Evans), why she is the way she is.

If you’re going in to this movie expecting a full-on psychological thriller about this increasingly unstable person terrorising a group of high school students, then you’ll certainly get what you’re paying for; however, the nice little bonus you’ll be getting is just how gleefully over-the-top it all is, with a rather tongue-in-cheek personality to it that makes it a real blast to be around. Even though it is certainly a dark thriller at its core, there are no false pretences to it that feels it has to throw in a jump-scare every other second, because it seems to be aware of how silly its own plot is and has therefore realised that there’s not much point in trying to scare the audience when not much of it is designed to be that scary anyway. It’s a little similar to what the Happy Death Day movies ended up doing – which were, incidentally, two other films produced under the Blumhouse name – where the horror element is definitely there, and in some scenes there are moments where it does get extremely unnerving to watch, but the tone feels a lot lighter and filled with a more self-aware attitude than most of the more proper horror movies made by the company. Some audiences may want more of a focus on the creepier elements of the story, which could be partially why critics seem a little mixed on this movie so far, but by injecting a bit more over-the-top life to its narrative, direction and especially its acting there’s a much stronger feeling of fun to compensate for some of its less thought-out moments.

A large chunk of what makes this movie work is how delightful Octavia Spencer is here; the actress is having an absolute blast playing this utterly demented person with some seriously screwed-up ideas of fun, and God be damned if she doesn’t nail each and every one of her scenes which require her to act totally crazy. Her character isn’t just a one-dimensional monster though, as we do see in those flashbacks how she was treated as a teenager by her own peers, and when you see what she was subject to you are entirely on her side as she’s laying out the foundations for her revenge on those who had wronged her; there is an amazing scene in this movie which involves Spencer’s character encountering one of said former high school acquaintances in her car whilst they’re out jogging, and without giving anything away it ends with one of the best lead-ins to Earth, Wind & Fire’s “September” that’s ever been in a film.  However, she is still most certainly the bad guy in all of this, especially when she begins to act more and more erratic and unhinged around these gullible young people, and she is selling all of this with incredible ease, no matter how ridiculous it is that despite clearly showing signs of having mental problems these dumb kids still want to hang out at this woman’s basement in the middle of nowhere. She is such an enjoyable presence in this movie that any problems you may otherwise have with the film are instantly negated when you see how much fun this actress is having in a role that she feels like she was born to play.

I also like how it’s someone like Tate Taylor making this very low-budget, trashy (but enjoyably so) and pretty campy little horror, because when you look at his resume which includes stuff like The Help, James Brown biopic Get On Up and more recently the Emily Blunt thriller The Girl On The Train, it’s a fun thought to have as you imagine him just wanting to make something totally different to most things he’s done before, and then choosing this wacky and insanely goofy horror-thriller as that project (also look out for Allison Janney, a staple in all of Taylor’s films up to this point, in a small role as the vet that Ma is an assistant for). I don’t blame him for choosing this one, especially when it allows both him and his close friend Octavia Spencer to let loose and go completely bonkers whilst also giving us something silly but frightfully entertaining.

Ma is a silly yet enormously entertaining horror-thriller with a light-ish tone that doesn’t neglect its creepier elements, and hugely benefits from a massively fun Octavia Spencer having a blast as the deranged party animal of the title.

Check out Ma showtimes in London
on Walloh.