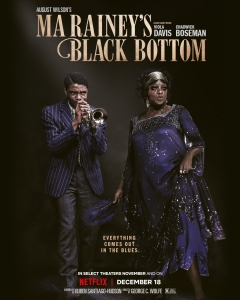 BASICALLY…: In Chicago 1927, a recording session with blues singer Ma Rainey (Davis) and her ambitious horn player (Boseman) descends into a conflict of egos…

The second in producer Denzel Washington’s 10-picture deal with HBO (later Netflix) to adapt a number of plays by famed playwright August Wilson, the arrival of Ma Rainey’s Black Bottom has been heavily overshadowed by the tragic and unexpected death of its co-lead, Chadwick Boseman. The actor, who passed away in August after a years-long struggle with colon cancer, was said to have delivered a career-defining turn in the film even before his passing, so a lot of eyes are currently on the film to see just how, not if, Boseman would bow out with style and grace.

To get that query out of the way first, Boseman is phenomenal in this film. His is a performance full of power, swagger, emotion and temperament you rarely see in a lot of leading actors these days, and as a final performance (albeit an unintentional one) it’s one hell of a way to make an exit. Audiences will undoubtedly find it a bittersweet viewing experience, because we will never get to see how much higher he can take his passion and dedication to the craft, whether it’s in the Marvel Cinematic Universe or playing another historical figure in black history, but his turn in Ma Rainey’s Black Bottom is a perfectly contained example of all the talent he had to give while he was still with us.

The rest of the film, though, can’t quite keep up with Boseman’s greatness. It’s still a good movie – well-acted, timely, and simmering in August Wilson’s lyrical dialogue – but it never really manages to shake away its stage roots which, in the world of film, has the potential to be a huge problem.

Set in 1927 Chicago, the majority of the film takes place at a recording studio, where blues icon Ma Rainey (Viola Davis) is due to record some tracks with her band, including her hot-headed trumpet player Levee (Boseman). Ma Rainey is running late, leaving the band members to pass the time until she arrives; Levee constantly expresses his desire to form his own band and be as big a success as Ma Rainey, much to the irritation of the older, more experienced musicians like Cutler (Colman Domingo) and Toledo (Glynn Turman). When Ma Rainey finally shows up, the drama doesn’t die down; if anything, it gets even more tense with Rainey’s diva-ish demands from insisting her stammering nephew Sylvester (Dusan Brown) record the intro for her signature track, to bringing her young girlfriend Dussie May (Taylour Paige) along to the recording booth, to refusing to start the session if she doesn’t have a bottle of Coca-Cola. All the while, her white manager and producer (Jeremy Shamos and Jonny Coyne respectively) attempt in vain to calm the nerves of Rainey and her increasingly agitated band members.

There’s no denying that August Wilson’s words are full of poetry and passion, as producer Washington previously made clear with Fences (which he also directed and starred in), and Ma Rainey’s Black Bottom is no exception. Each converse between characters and every single line or monologue is masterfully written, drenched in deep-reaching themes of black civility in a time where that was extremely hard to come by, all delivered by carefully-chosen actors who have the utmost respect for these words and who wrote them. Beyond Boseman’s fantastic turn, Viola Davis is also outstanding as Ma Rainey herself, bringing no-nonsense attitude and a fiery temper to the Georgia-born “Mother of the Blues” in a screen turn where the actress is unafraid to go ugly in both her physical and emotional transformation. She lends access to the powerful theme of black artists and their work being exploited by white producers, an all-too-common practise which in some parts of the industry remain true to this day, but here is personified by glaring, sycophantic managers that act subservient and complimentary towards the talent yet show no desire to open up as a personal friend, only there to grab a hold of their music and then part ways.

As dramatic and insightful as Wilson’s play is, though, this film is unable to break away from its theatrical trappings and feel truly cinematic. Director George C. Wolfe is primarily known as a stage director (though he has directed a few other movies in the past, some of them direct-to-TV), and you can tell he’s not quite able to emerge from his comfort zone with the miniscule locations and heavy reliance on the dialogue over the visuals to tell its complete story. A major dramatic moment near the end of the movie falls a little flat because it’s not portrayed as shocking or even as surprising as it might have done on the stage, and the overall effect is dampened by a lack of build-up and suspense that is needed even more in the constructs of a film. The story and its characters are still compelling enough for a satisfactory viewing, but you always have the feeling in the back of your mind that more could have been done to really bring this narrative a sense of scope and visual depth that you just cannot achieve in live theatre.

Most will likely view this movie as a fond showcase for the dearly departed Chadwick Boseman, and it’s warranted by the astronomical turn he leaves us with, although other elements of Ma Rainey’s Black Bottom such as its powerful themes and elegant writing shouldn’t be neglected either – but don’t expect a truly cinematic experience.

Ma Rainey’s Black Bottom is a strong adaptation of the classic August Wilson play and its timely themes, with two fantastic turns by Viola Davis and the late, great Chadwick Boseman, but it doesn’t quite manage to transcend its stage roots which can become glaring as the limited sets and overreliance on dialogue over visuals cloud over the actual material.

Ma Rainey’s Black Bottom is out now in select cinemas across the UK, and will be available on Netflix from Friday 18th December 2020.