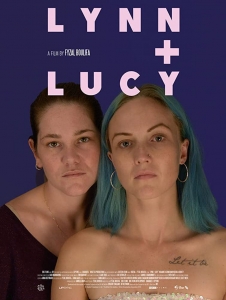 BASICALLY…: Two best friends (Scrimshaw and Burley) find their relationship tested in the wake of a horrific tragedy…

Every now and then, we tend to fall out with our friends; sometimes temporarily, other times forever. I know that I have experienced the latter very recently, with certain people I thought I was close with but turned out to hold me in such little regard it just wasn’t worth having them in my life before – but I doubt that whichever friends I end up losing over the years, it probably won’t be as harsh as the one at the centre of Lynn + Lucy.

The feature film debut of shorts filmmaker Fyzal Boulifa, which bathes itself in dread and growing uncomfortableness as the titular relationship deteriorates, introduces us to Lynn (newcomer Roxanne Scrimshaw), a working-class mother who fell pregnant with her ten-year-old daughter when she was 16 and is now in a sparkless marriage with the girl’s father, and Lucy (Nichola Burley), the more lively and free-spirited friend who herself has just become a mother with her younger boyfriend Clark (Samson Cox-Vinell). The two of them have been inseparable since they were 11, to a point where they’re even living right across from each other in their small Essex community, but while Lynn has become accustomed to her responsibilities as a mother and a wife, the far more inexperienced Lucy is less keen to put her life on hold as she raises her infant son.

Not long after Lucy expresses hints of post-natal depression, an unspeakable tragedy befalls her family, which is when the film really gets itself rolling. Not only is the titular friendship tested beyond the point of no return, but Boulifa also factors in commentary about mob mentality, personal guilt, and irrational paranoia being factors that lead to something worse and much more devastating. It’s a slow-burn of a movie, with events playing out very naturally and quietly – there’s virtually zero musical score throughout the entire film, even during the ending credits – but Boulifa gives every scene a fair amount of dread and bleakness that leaves you with a sense of doom and gloom with every passing second. From the hints you pick up along the way – though the true facts are mostly left to interpretation – you definitely sense that something is not right with Lucy and her increasingly erratic behaviour, but as we’re seeing things from Lynn’s point of view we feel things become as twisted and warped as they are for her as she slowly becomes influenced and pressurised by the local community when their own baseless opinions about the central incident. Nowhere is that more apparent than at the beauty salon where Lynn applies for a low-key assistant job (her becoming a mother so early had prevented her from achieving some basic qualifications); the others who are working there clearly have vapid and rather cold personalities, to a point where the store’s manager consistently bad-mouths Lynn behind her back due to their antagonistic relationship back at school, yet Lynn makes the conscious decision to ally herself with them and eventually adopt their ideologies, even when it comes to disregarding Lucy who at this point is slowly turning into a local pariah. It’s bad enough that the central friendship is shown as deteriorating as badly as it does, but the film makes a strong point that the judgemental nature of closed communities such as this definitely help to make the situation a lot worse than it probably is.

Boulifa keeps the drama contained within a claustrophobic 4:3 academy ratio with some intense close-ups where you can just about make out the person’s pores, which definitely adds to the growing tension that rises throughout the movie, and he is also able to get some incredibly emotional performances out of his two leads. Roxanne Scrimshaw, for someone who prior to this had absolutely zero acting experience – she was talent-spotted in public, a reasonably common practise for filmmakers seeking unknowns for their leads – is extraordinary in a role that often requires her to communicate emotion through mere facial expressions, and she really captures the character’s mature but easily manipulated nature as well as any other experienced actor. Likewise, Nichola Burley has some incredibly emotional monologues and some very subtle personality traits that make her seem human and not the outright monster everyone else is making her out to be; you’d never believe that this is the same actress who headlined that StreetDance 3D movie from ten years ago (yes, I am aware she’s been in other things, but let’s face it: that’s probably the only thing many of us remember her from). Their performances collectively leave you in a state of doubt and fear, because you can feel their natural chemistry in early scenes, and as we find out about their potential true nature further into the film it not only feels tragic that society is forcing them apart like this but it is also vague enough for the audience to make up their own minds about the circumstances. Is Lucy in the wrong, or is it Lynn who’s the complicit one in all of this? The movie never truly tells us, but you can be convinced by either argument because these performances are so strong that either side would feel just right enough.

It definitely isn’t an easy watch, with some hard-hitting topics that could well be triggering for anyone who’s gone through similar motions, but Lynn + Lucy is an emotional, effective watch with some stellar lead performances and a promising debut for Fyzal Boulifa who, if he keeps this up, could very soon compete with the likes of Ken Loach and Andrea Arnold for the lordship of kitchen-sink dramas.

Lynn + Lucy isn’t an easy watch with its strong focus on certain heavy topics, but it is an impressively put-together debut feature for Fyzal Boulifa who also gets some great performances out of Nichola Burley and newcomer Roxanne Scrimshaw in the title roles.

Want to decide what the movie’s like for yourself?
Check out Lynn + Lucy
via