Lucy In The Sky (Review)

Lucy In The Sky (Review) 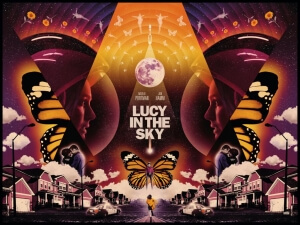 BASICALLY…: Astronaut Lucy Cola (Portman) begins to lose her grip on reality after having a transcendent experience in space…

When real-life stories are adapted into film or television, there are naturally going to be some people who are unhappy with certain changes done to fit a traditional narrative. In the case of Lucy In The Sky, when it debuted at Toronto earlier this year all anyone could talk about was how much it failed to include the most famous aspect of former astronaut Lisa Nowak’s story – without getting into specifics, it involves adult nappies.

That particular exclusion seemed to overshadow practically everything else about the movie, which in a way is a shame because there is plenty more insanity to talk about here, namely the fact that it’s perhaps one of the most misguided major theatrical releases since Everything, Everything, and an ambitious disaster that not even a game Natalie Portman can save.

Portman plays Lucy Cola – a fictional version of Nowak, in a film that claims to be inspired by true events – who we first meet as she’s drifting about in space, completely entranced by the rising sun from behind Earth’s body. Back on Earth, she wants nothing more than the opportunity to go back up, and rigorously prepares for NASA’s evaluation during its selection for the next major trip up into space. She even finds time to cheat on her well-to-do husband Drew (Dan Stevens) with fellow astronaut Mark (Jon Hamm).

There’s only one problem, though; she’s crazier than a case full of Gremlins.

As it turns out, Lucy is having withdrawal symptoms from her time in zero-gravity, with her fierce determination to return starting to put her and others in danger, and her mental state begins to get so far out of control that by the third act she has become a raving, psychotic lunatic. It’s one thing to have a movie be about a character that is by every definition mentally unstable – for a recent example, see Joker – but half the time, Lucy In The Sky seems blissfully unaware that its protagonist is truly insane, well before any symptoms start to show up. Almost right away, her character is unnerving, smiling widely with vacant, almost possessed eyes which seem to stare straight into your soul, and her passive-aggressive attitude is so vibrant that not even her Texan twang can blanket it. There is something immediately off about this character, and all of it is further exacerbated later on as she starts becoming a hybrid of Glenn Close in Fatal Attraction and Portman’s Oscar-winning turn in Black Swan, when deluded jealousy and increasingly erratic visions start to plague her better judgement. Yet, the movie never really calls her out on it, and lets her off far too easily in instances where she should really be getting the help that she clearly needs; it feels like the movie treats her weary mental state as a chipper and quirky attitude, even as characters slowly start to realise there is something very wrong with this woman. If the movie had the tone of a psychological horror then her behaviour might actually seem to be on par with everything, but the fact that this is meant to be a drama we’re meant to take seriously makes the whole thing feel very uncomfortable to experience.

There are times when you can tell that was probably what director and co-writer Noah Hawley was going for with this film, but he and his fellow co-writers – who, incidentally, are all men – fail to properly handle the lead female character’s rapidly declining mental state in a correct way, leaving the character an irrational, unlikeable and even sexist caricature in their wake. That ends up being the defining trait for this character, because you never really understand much else about her, including what it is about space that makes her want to go back all of a sudden (for all we know, she just likes the view). It’s a shame for Portman, who is definitely trying to salvage what she can from the material, but a committed turn from her cannot shake away the fact that she is playing someone that the movie is taking way too many liberties with. Her efforts are further marred by Hawley’s unfocused direction, which puts all of its efforts into looking as stylish as it can instead of actually developing the one-note cartoon he has as his lead. However, while the film has moments of visual splendour, some style choices are downright bizarre; the aspect ratio constantly changes throughout, going from full-screen to a boxed-in Academy ratio to ultra-thin widescreen, and every time it shifts it is always ungodly distracting, taking you right out of the drama (or what notion of drama there is) and robbing you of the same kind of transcendent experience the main character seems to have gone through.

Watching this movie is a baffling experience, because you’re sat there watching this obviously crazy person grow to be even more crazy, and yet the movie isn’t really calling it much to attention. It is thoroughly misguided, and doesn’t do the real-life figure this movie is based on any favours – it’s very possible that all of this stuff actually happened to the real Lisa Nowak, but if you’re going to show that in a film at least have the decency to be aware that this person is in need of serious help. Suddenly, the use (or non-use) of adult nappies doesn’t seem like such an insane concept.

Lucy In The Sky is woefully misguided, portraying its central character as someone who is clearly mentally unstable but does or says nothing about her condition, leaving her a crazy caricature instead of an actual character, despite Natalie Portman’s best efforts to shake off director Noah Hawley’s stylish but overwhelming direction and some very questionable writing.

Want to decide what the movie’s like for yourself?
Check out Lucy In The Sky showtimes in London
via