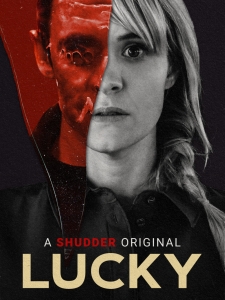 BASICALLY…: A woman (Grant) is being stalked by a menacing figure, but struggles to get anyone to believe her…

Brea Grant, both the star and the writer of director Natasha Kermani’s Lucky, has some very poignant comments to make about feminine roles in society, and she manages to find extremely unique ways of getting them across in this surreal psychological horror where everything feels like one big living nightmare which, disturbingly, we are not asleep for.

Grant plays May, a self-help author whose books are currently struggling to find an audience (perhaps attaching isolating titles like “Go It Alone” aren’t helpful), and who one night wakes up to discover a masked man standing in her backyard. She goes to alert her husband Ted (Dhruv Uday Singh), but he’s surprisingly nonchalant about his presence, as though it’s a completely normal thing for this stranger to break into their home. Before an agitated May can get any answers the next morning, Ted leaves her alone in the house so she can “calm down”, but he doesn’t come back, leaving May to fight off the intruder that night, and the next night, and the next; even when it looks like he’s been killed, he disappears as soon as May’s eyes are off him. Her calls for help get stonewalled left and right, from the police who prove extremely unhelpful every single time she notifies them, to close friends who eerily express little sympathy for May’s plight. All the while, we are left to ponder: is May crazy, or is she trapped in the middle of something far more sinister?

There are reasonable arguments to be made for both sides, but it is very clear that Grant has only one of those on her mind in both her writing and lead performance. Her script takes the audience on an increasingly bizarre journey through the life of a harassed woman, where history is always doomed to repeat itself like Groundhog Day (though unlike that set-up, the timeline isn’t literally reset every day, and other people seem to hint that they know exactly what’s going on), and even worse there are less people on her side each and every time. Those who are claiming to help only serve to tell May how “lucky” she is to keep surviving these attacks, and proceed to do absolutely nothing else beyond that; police presence outside May’s frequently broken-into home is minimal at best, while her now-AWOL husband frequently dodges her calls and texts asking for clarification. There’s a lot to unpack here that can be seen as a horrific satirical allegory about the treatment of women in society, and how they can very frequently be undermined by authority figures even when they’re in consistent danger, with some dismissing May’s frequent attacks as stuff that’s just everyday activity, and others treating her as the hostile one for her understandably agitated state.

Grant’s script isn’t always subtle about her message, but the execution is attention-grabbing enough for it to at the very least stick around in your mind. Part of that comes from elements of Natasha Kermani’s direction, which consistently dips its toes into more and more surreal territory as it goes along, with a unique stylistic flare that includes a John Carpenter-style synthesizer score and colourful cinematography that can sometimes feel like it’s come right out of a Dario Argento movie. The way that Kermani paces her scenes and gives pointers to certain actors makes the whole film feel like one long-running nightmare which seems impossible to wake up from, which leaves you constantly on edge as things get weirder and crazier for our main character.

Things come to a head in a finale that is bound to leave most viewers scratching their heads in confusion, as well as frustration for its considerable lack of answers. In a way, though, that is kind of the whole point of this movie; everything that May is going through will keep happening again and again, no matter what she does every time to apprehend and sometimes even kill her mysterious intruder, which means that authority figures will always treat her as unstable and keep reminder her of how “lucky” she is. This is the true horror of the film, and indeed parts of society in general, that women will sadly struggle to always be believed about even the most obvious of situations, in the kind of micro-aggressive misogyny that can literally harm people if not addressed.

The film is a smart and savvy reflection of these real-life horrors, executed in surreal and nightmarish fashion which some will understandably struggle to comprehend, especially towards its somewhat bleak conclusion, but others will have been very lucky indeed to have experienced at least once.

Lucky is a darkly satirical look at the way society treats women who have been placed in consistently grim circumstances, which writer/star Brea Grant and director Natasha Kermani execute in increasingly surreal but all too chilling fashion that constantly leaves the audience feeling just as trapped in this never-ending nightmare as the main character.

Lucky is now available to stream on Shudder.