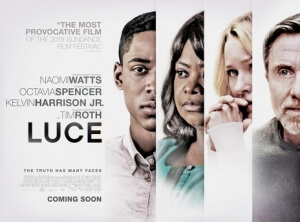 Filmmaker Julius Onah’s third film Luce – following The Girl Is In Trouble and, most prolifically, The Cloverfield Paradox – is one that has a lot of questions on its mind, but does not give you easy answers. It sets up numerous challenges, yet not all of them are so obvious. You begin thinking you’ve chosen the right side, but by the end of it you’re not entirely sure you’ve made the right choice.

It’s all part of the extremely complex web that the film weaves, sticky enough to hold your firm attention, but not quite as strong to stop you from wriggling free. No matter what, though, it’s an intense sit and one that keeps both your brain and your eyes thoroughly engaged.

The central character of the film is Luce (Kelvin Harrison Jr.), a black teenager who’s considered a wunderkind by nearly everyone around him. At the age of seven, he was taken from war-torn Eritrea and adopted by white couple Peter (Tim Roth) and Amy (Naomi Watts), and has since gone on to become a high school track star, with strong grades and a prosperous future ahead of him. The only person doubting his potential, however, is Luce’s history teacher Harriet Wilson (Octavia Spencer); when she finds a bag of illegal fireworks in his locker – having searched it after being provoked by an essay Luce wrote about the necessity of violence to confront colonialism – she raises her concerns with his parents, only for them to at first doubt her suggestions that Luce could be prone to darker tendencies, having spent the first few years of his life in a combative environment. However, when further revelations about Luce begin to seep through the cracks, it suddenly becomes hard to know which side of the argument is the right one: Luce’s, or Wilson’s.

That’s the most intriguing thing about this whole movie, the fact that you are never entirely sure who is in the right, and who is in the wrong. Wilson at first seems antagonistic, firm-fisted in her classroom and quick to put certain students on a pedestal – not just Luce, who she sees as the example others should look up to, but underachieving students like a fellow black teenager who she treats more harshly due to his lower intelligence and drug use – but then you start to see what her personal life is like, looking after her mentally ill sister who can be quite a handful, so it’s understandable if the current frustrations of her professional life are being caused by the pressures at home. But then, it flips things over again, and again, and again until you have no idea if this person really is trustworthy or not. It’s the same with Luce, who at first we see being the typical model student; bright, sophisticated, and with a knack to charm the pants off of anyone he crosses. Later on, though, he acts in ways which make you think this guy might possibly be a bit of a psychopath, and could genuinely be the threat that his teacher is making him out to be; but again, the movie completely throws your expectations for a loop, and soon you have no idea who to trust. Onah and co-writer JC Lee have crafted a calculated and uncertain narrative where you never truly know what anyone’s true motivations are, which the director keeps intentionally vague through an intense and somewhat intimidating tone that keeps the mystery alive without letting the ball drop.

The movie is about the nature and dangers of high expectations, and how the constant pressure to be the token role model can inadvertently lead to dangerous, even toxic, ways of thinking. Onah’s on-point direction, as well as the solid performances of his lead ensemble (particularly Kelvin Harrison Jr. who truly shines as the prodigal son in question), show a true understanding of the pressures which can at times seem impossible to live up to, especially in a world full of people who are looking for any excuse to put someone else down just to feel somewhat good about themselves; not even Luce’s well-meaning parents get off the hook that easily, as the film hints at a white saviour complex brewing within their lenient and supportive parenting towards their adopted black son. Themes of institutionalised racism and sexism also show up in the broth, and like the others they are handled intelligently and in ways that really make you think about how much of it can be taken for granted, leaving things to feel even more tense because you have no idea where and how it’s all going to eventually go.

Sometimes, the plot twists verge on the edge of camp, more like a saturated television soap opera than anything else, but they’re at least intriguing enough to stop from going completely over it. There are also certain questions that don’t feel as satisfyingly resolved, but it feels like the movie is aware that it’s not answering everything. After all, it’s a movie about expectations, and to expect an intricate, largely intelligent plot like this to just hand you everything on a silver platter might just be asking too much of it. It is allowed to leave certain things in the dark as much as it can, and can definitely allow itself one or two minor flaws, because the rest of it is so tightly done that such imperfections feel earned, and it remains a fierce and cerebral challenge that you’ll be wanting to talk about with other people all the way home.

Luce makes effective and thought-provoking use of its increasingly intricate and thematically complex narrative, with director and co-writer Julius Onah giving us a situation where there are no easy answers about who is right and who should be trusted, while also playing with your uncertainties to give us an intriguing psychological thriller where nothing is certain or as it seems.

Want to decide what the movie’s like for yourself?
Check out Luce showtimes in London
via