Luca (Review) – Pixar’s Lightest And Most Simplistic Film In Years 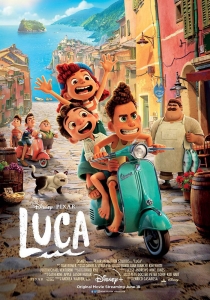 BASICALLY…: Two young sea monsters (Tremblay and Grazer) venture to the surface for a summer of fun and friendship on the Italian Riviera…

Because of its reputation as one of the leading animation studios in Hollywood, and given the rather strong line-up of Oscar-winning movies it’s produced over the last few years, Pixar is almost certain to get a smacking from critics and audiences for their latest film Luca – but for the mere crime of simply being good, but not great.

So many people tend to put Pixar on such a high pedestal that even their slightest misfires earn their eternal wrath – while films like The Good Dinosaur aren’t nearly as strong as Toy Story, Finding Nemo, Inside Out and others, people just won’t stop being so harsh about them even years after their release – and it’s a little depressing to see others whinge so hard about stuff like this which, compared to everything else that’s going on in the world, really doesn’t matter in the grand scheme of things (see also: The Rise of Skywalker, or the final season of Game of Thrones). Not everyone or everything can produce a solid-gold egg each and every time, so when it comes to complaining about how Luca simply doesn’t meet the standards set by many of Pixar’s other classics, I urge you to take a long, hard look at yourselves and consider that maybe the problem lies in the unrealistic expectations you’ve set for yourselves with these sorts of things.

That being said, Luca certainly isn’t going to be remembered as one of the studio’s classics by any means, but there is charm in its simplicity and, of course, some rather gorgeous animation to give younger viewers something colourful to sit down in front of.

The film, directed by Enrico Casarosa (of the Oscar-nominated Pixar short La Luna) in his feature debut, is set in the small portside town of Porcorosso in 1950s Italy, where just outside of it within the depths of the ocean lives a community of sea monsters. One of them is a young creature named Luca (Jacob Tremblay), whose curiosity for what lies above the surface is intensified when he meets another young sea-dweller named Alberto (Jack Dylan Grazer), who introduces Luca to some of the wonders that humans have to offer, from record players to Vespas. Against the wishes of his concerned parents (Maya Rudolph and Jim Gaffigan), Luca travels with Alberto into the town to explore, and they soon befriend human girl Giulia (Emma Berman) who is eager to win the town’s annual race against local bully Ercole (Saverio Raimondo), so she recruits her new friends to form a winning team, while the boys also try and hide their oceanic origins from the monster-hunting townsfolk.

Luca is a very different Pixar movie than the vast majority of ones that have come out more recently, because it is not so much focused on its storytelling or heavy themes, but is more of a “stuff happens” kind of movie, where the stakes are intentionally low and the characters spend most of the time simply hanging out with each other and enjoying their company. It feels like a Studio Ghibli movie in that regard, particularly ones like Kiki’s Delivery Service or My Neighbour Totoro where not a whole lot happens but there’s enough visual delights on-screen to keep you invested (and honestly, Luca feels far more like a Studio Ghibli movie than actual Studio Ghibli movie Earwig and the Witch). Influences of the Japanese anime titan can also be felt in the overall design of the movie, with certain characters given rather bubble-like looks along with some exaggerated cartoon reactions and slapstick, while the buildings and the landscapes are given a lot of depth and character to them, which goes along with how – like virtually every other Pixar movie ever – the animation is seriously top-notch, even if it’s missing the photo-realistic quality of its most recent film Soul.

The movie does a decent job of not being anything more than what it originally sets out to be, even if that thing is significantly less deep or complex than your average Pixar classic, which is sadly where the movie does seriously falter. Though it is a movie that isn’t entirely concerned about plot, what little story it does have is very predictable and formulaic, the kind where you already know seconds in what’s going to happen, who the main villain is (and what a stock villain it is, too), and what lessons are going to be learned by the end of it, and it delivers all of those without any real surprises. There is also something all too generic about the fantastical elements of this movie as well; while they’re ripe with colour and surrounded by impressive water animation, the designs of the sea monsters lack the creative spark that has driven other movies like this, even beyond Pixar’s realm. They’re not terrible designs, and the characters are likeable enough to follow, but part of you does wish that the writers and animators spent a bit more time coming up with something that was visually and conceptually a little more interesting or original.

So, while Luca certainly isn’t one of the studio’s best and brightest by any means, I implore anyone who also sees it to not give it such a hard time just because it’s merely okay. It falls into the same category of Pixar movie as The Good Dinosaur, where it’s much more simple and straightforward in its storytelling, themes, characters etc, but there are still some charming little details like the animation or quieter moments of drama that do help it float. Not everything that Pixar does will turn out to be the next Toy Story, and that’s okay; even the world’s leading animation studio can afford to turn in a mellow, non-challenging product every once in a while, and Luca fills the gap neatly without harming anyone, except some people’s expectations about what a Pixar movie should always strive to be.

Though it’s not an instant Pixar classic, there’s enough light enjoyment to fish out from this gentle and mild family adventure.

Luca is Pixar’s lightest and most simplistic film in years, which might heavily disappoint those with high expectations for any Pixar product, but there is enough charm in its much more mellow and straightforward nature.

Luca is now available to stream on Disney+.