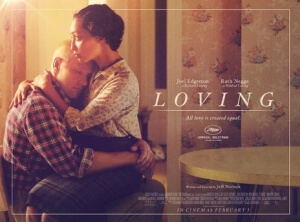 BASICALLY…: In 1950s Virginia, interracial couple Richard and Mildred Loving (Edgerton and Negga) are persecuted for their marriage, which becomes a court case that could change the Constitution…

Writer-director Jeff Nichols, a filmmaker I have been fond of for some years now after films like Take Shelter and Mud – although I found last year’s Midnight Special to be a little underwhelming considering the high expectations I had for it – is behind the camera once again for Loving, the real-life tale of interracial couple Richard and Mildred Loving (Joel Edgerton and Ruth Negga, respectively). Living in rural Virginia during the 1960s, where interracial marriage is not recognised and considered illegal, both are arrested by the local authorities and exiled from the state for 25 years. However, when the city life just doesn’t cut it for them or their growing family, their decision to risk everything and move back to Virginia soon attracts the attention of the American Civil Liberties Union, who offers to take on their case pro bono all the way to the Supreme Court, and in doing so ends up changing the Constitution for the better.

However, the film is not at all interested in exploring the legal side of the case, with the lawyer characters including Nick Kroll’s portrayal of ACLU lawyer Bernard S. Cohen being relegated to side characters. In fact, the film puts the majority of its focus exactly where it needs to be: the relationship between Richard and Mildred Loving. Nichols offers an intimate look at the deep love they clearly share with one another, even opening the film with them already firmly in love, and Mildred announcing that she’s pregnant with their first child. From that very first scene, you can sense that their bond is virtually unbreakable, and that these are two people who no matter what, through thick and thin, have each other’s unconditional support at the end of the day. It is a relationship that is portrayed like any other, which really works perfectly around the message of love being universal, no matter what race, sex et al. Also contributing heavily to their on-screen romance is the strong chemistry and magnetic individual performances from both Edgerton and Negga, with the latter especially standing out as someone who takes an uncontrollable amount of bad things with a defiant steadfast attitude and an eternal look of determination that everything will work out fine in the end, because she has the undying love of her husband. You are right there with both of them as they are subjugated to endless humiliation and persecution by the racist law enforcers, led by a disgustingly villainous Marton Csokas, and are both cheering and crying for them when victory eventually comes around for them. It is the strength of both Nichols’ intimate direction and writing, and the two lead performances that are both excellent in their own right, that you really feel like this is a romance worth fighting for.

Although it is one of the more romantic films in recent months, it also carries a significant amount of weight to it regarding its themes of segregation and persecution based on outdated beliefs of racial inequality, which given recent events in American history make this film feel a lot timelier than it probably intended. With the world so concerned right now with granting equality to those who need it, pushing back against the backwards-minded authorities in charge, a real-life story of such like the Lovings is heavily needed to spread the positive message of love for all, colour be damned, and to rob the bullying and prejudiced persecutors of their power. To say that it should erase all prejudices at once is incredibly immature, as no matter what we do as a species prejudice will always factor into our everyday lives somehow, but if an interracial couple from rural Virginia in the 1960s can somehow fight the system in order to preserve their love and the loves of other people in their situation, then perhaps Loving is a gentle and, yes, loving reminder that no matter what, love conquers all.

Loving is a gentle and intimate portrayal of the Loving couple that is expertly brought to life by writer-director Jeff Nichols and two wonderful lead performances by Joel Edgerton and especially Ruth Negga, both of whom really make you feel the genuine connection that these real people actually felt for each other.