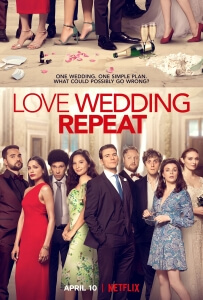 BASICALLY…: During his sister’s wedding, Jack (Claflin) runs into a bunch of mishaps…

WARNING: THIS REVIEW CONTAINS MILD SPOILERS – IF YOU’D RATHER WATCH THE MOVIE KNOWING NOTHING ABOUT IT GOING IN, STOP READING AND COME BACK WHEN YOU HAVE.

It seems to be a stipulated rule that if there is a wedding at any point in a farcical comedy, something disastrous will occur. It’s kind of like putting a cat in the middle of a dog pound; you’re just asking for trouble by simply putting two and two together. So, when we say that disaster strikes at the heart of Love Wedding Repeat, a nuptial-themed rom-com with awkwardness and cringe to spare, we absolutely mean it.

Everything you could imagine goes wrong at the wedding of Hayley (Eleanor Tomlinson) and her Italian beau of six months Ronaldo (Tiziano Caputo), much of surrounding Hayley’s brother Jack (Sam Claflin); not only does he have to deal with some incredibly dull guests, including kilt-wearing bore Sidney (Tim Key), as well as encouraging Hayley’s “man of honor” Bryan (Joel Fry) with his impending speech, but he has to deal with being seated at the same table with not one but two former flames; there’s the stuck-up Amanda (Freida Pinto) whose insecure new boyfriend Chaz (Allan Mustafa) is constantly (and literally) comparing penis sizes, and then there’s Dina (Olivia Munn), an American who Jack almost wooed three years earlier, until the moment was abruptly ruined. Even more concerning is the fact that Marc (Jack Farthing), a former associate of Hayley’s who he’s been obsessed with for years, has shown up uninvited, coked out of his mind and ready to declare his love for her in front of everyone on her big day. Thus, a series of wildly embarrassing events play out, involving a drugged champagne glass, some boring stories about car insurance, and an important film director who also happens to be at the reception.

In short, a lot of stuff is about to go down. And yet, it’s never quite as rambunctious or amusing as it all should be.

The director is Dean Craig, best known as the writer of the hit comedy Death At A Funeral, and it appears that he’s simply made a universe expansion package here with another big event with friends and family marred by awkwardness and sitcom-worthy embarrassment. The comedy here is very much in line with Death At A Funeral (and to a lesser extent, the unnecessary American remake starring Chris Rock), with one bad thing happening after another before everything comes crushing down like a rainstorm of bricks, but in the case of Love Wedding Repeat it never feels like there is a natural order to things, with most of the twists and turns feeling much more contrived and less spontaneous. The movie definitely makes you cringe, but only because some of the things that happen are genuinely off-putting and not because they’re actually funny; it makes the film a far more awkward film to sit through when there’s so much embarrassment to go around, but the majority of the humour either doesn’t land or is telegraphed so hard that you’ve figured out the punchline long before it even becomes apparent. For most of the first half, the movie just plods along with a mostly humourless air to it, at once a mixture of all the awkward comedy of Death At A Funeral and the romantic sensibilities of something like Four Weddings and a Funeral – even Sam Claflin seems to be doing a Hugh Grant impression throughout the entire thing, complete with the nervous stammering and polite British manner that made him such an easy target for satirists back in the day – complete with many of the actors trying way too hard with the material (except for Olivia Munn, who plays it cool as ever) which simply doesn’t work.

And then, out of nowhere, it suddenly becomes Sliding Doors; an unseen narrator, identified only as the Oracle (voiced by Penny Ryder, seemingly doing another impression with this one being Judi Dench), offers the viewer alternate realities where several things could have gone completely differently, similar to how Sliding Doors or even Black Mirror’s breakthrough Netflix special Bandersnatch offered more or less the same thing. It’s here where the film gets a little more odd in terms of my overall feelings towards it; on the one hand, it’s nice to have a major surprise like this come in the middle of the film without it once being hinted at in the trailers, but on the other hand it shows the glaring flaws with the film’s overall structure. You can tell that Craig originally wrote himself into a corner and opted out by playing the “multiple realities” card, which despite its late but significant introduction is mostly shown through montage and isn’t explored as much as it really could have. It leads me to think that this whole thing would have worked a little better if it were done in the same style as Bandersnatch, as a Choose Your Own Adventure style interactive film where viewers could decide certain things that would dictate the overall outcome; that way, at least it would have been a little more fun than the static narrative it has instead opted for.

As it is, the movie is a mostly flat rehash of the Death At A Funeral model, which is marred by overly awkward humour that’s more awkward than humorous, and a late addition of multiverse theories which only jar the overall thought process even more. Like the wedding in this movie, it’s kind of a mess.

Love Wedding Repeat attempts to match the levels of farce that writer-director Dean Craig previously brought to Death At A Funeral, but it can’t keep up with humour that’s more cringeworthy and awkward than it is funny, and a late turn into Sliding Doors territory which is surprising but also underutilised. It’s probably best to object to this one at the ceremony.