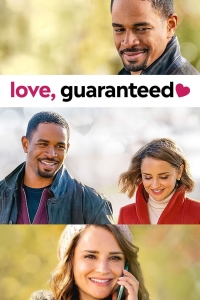 BASICALLY…: A lawyer (Cook) hires a client (Wayans Jr.) who wants to sue a dating website, only for the two to fall for each other…

The romantic-comedy is one of the easiest formulas to work with, because every single plot point is neatly laid out in front of you, starting with the awkward meet-cute, to the growing courtship, all the way to the third-act break-up before the inevitable declaration of love in the climax. It would seem like it’s almost impossible to screw up such a simple structure, but more often than not there are plenty of rom-coms that fail to offer anything else outside of its tried-and-tested format, whether it’s interesting plots or characters or even a strong sense of humour, which is why it’s also one of the most ridiculed genres of film because they offer almost nothing new every time.

Love, Guaranteed is yet another one of those movies, a rom-com that unashamedly hits every single cliché in the book but adds very little else to distinguish itself from the countless others of its type. Even worse, it’s one of the lamer examples to come out in recent memory; not disgustingly offensive nor is it a rare gem, it is such a complete cookie-cutter of a product that it’s actually shocking that it ended up on Netflix instead of the Hallmark Channel.

The film’s romantic heroine is Susan (Rachael Leigh Cook), a lawyer whose entire life revolves around her job, leaving her – gasp! – lonely and unfulfilled without a man in her life (yup, it’s one of those films where the respectful job and nice living conditions simply aren’t enough to fill her tiny little heart). Unfortunately, she’s taken one too man pro bono cases, and her firm – along with her two only employees (more on them shortly) – is at risk of financial ruin. Enter Nick (Damon Wayans Jr.), a top-paying client who wants Susan’s help to sue online dating agency Love Guaranteed, which promises its viewers that they will find the right partner, something that Nick has yet to do, despite going on nearly a thousand dates (and that’s not an exaggeration, either – that’s a whole other thing). Per the usual rom-com rules, the two of them at first don’t get along, but slowly grow to like each other more and more as the film goes on, and if you’ve seen any romantic-comedy ever, then you know exactly how it all ends.

It is exactly the kind of movie you think it’s going to be; there’s no self-aware attitude, not even a knowing wink at some of these tropes, it just IS what you picture in your head when you think of a stereotypical romantic-comedy movie. The odd thing is, though, this doesn’t even feel like a movie. The way it’s shot, edited, acted, scored etc, every tiny little aspect of it feels like it’s a pilot for a Netflix sitcom; it is paced like one, it is most certainly written like one (to a point to where the dialogue actually pauses so that the studio audience which isn’t there can laugh along at the jokes), and it even has over-the-top caricatures which go way beyond satire and straight into self-parody. A prime example of the film’s blatant sitcom stylings is Susan’s two workmates, comprised of a middle-aged woman and a very effeminate gay man, both of whom seem to have absolutely nothing better to do in their own lives than to fawn over the main protagonist’s love life (even setting her up on the titular dating website during work hours; I realise that the firm doesn’t have many clients, but there’s surely  got to be something at this city-based law practise that’s more important they should be working on instead). They enter and exit scenes in ways that personify the word “camp”, and all of their dialogue is specifically tailored to either be comments on how hot the love interest is, or quips that would be followed immediately by that canned audience laughter which, again, does not exist here. I cannot stress how much of a stealth sitcom this movie is, and not even a good one; the comedy falls completely flat nearly every time, saved only by the actors’ very game enthusiasm for the material (and even then, the performances are nothing spectacular), with none of the writing or the direction doing wonders to elevate this very lame material either.

When it doesn’t feel like you’re watching an especially underwhelming episode of Unbreakable Kimmy Schmidt!, the film unilaterally sticks to its rom-com guns and rolls with each and every cliché it can fit into its contrived narrative. To use the word “predictable” would be far too, erm, expected of a description for this movie; literally every single scene in this movie, you can tell what the joke is going to be, how a character is going to act, what they are going to say, and why they are going to do it. It leaves you in a bewildered state of not caring, because this doesn’t just have a plot that’s so much like a lot of other things, but you don’t even have much sympathy for the lead characters, because they’re either too uninteresting or annoyingly quippy in ways that would only work in – you guessed it – a television sitcom, as opposed to a movie. The third-act break-up, a staple in all these movies, is even caused by one of the main characters withholding certain information that could very easily solve their situation through the power of simple communication, although at that point you’re way beyond the point of caring to even get frustrated about something like that. The lead actors’ chemistry is okay – again, nothing spectacular – but it’s never enough to convince you that these two would ever make a strong couple; you’re only asked to root for them to get together because that is what’s in the script, and this is such a conveyor-belt movie of its type that it doesn’t even care that the audience might be a lot more aware of the familiar tools its using to get them there, because it knows they will consume it and demand the next manufactured rom-com moments later.

It’s not really worth queuing up on Netflix because there’s so many other rom-coms out there that are far more entertaining than this, because they actually make some of those familiar clichés work for them with strong writing and likeable characters. This movie is just a cynical attempt to be part of that crowd, with none of the charm or the wit to withstand a feature-length running time, when a simple showing on the Hallmark Channel or Lifetime would have been far more appropriate.

Love, Guaranteed is a lame rom-com that unashamedly runs with each and every tired cliché in the book, only with zero charm or wit to even pass as a sub-par sitcom let alone a feature-length movie, complete with hackneyed writing and oddly TV-esque production values that make it seem like the Hallmark Channel would be a much better home for it than on Netflix.

Want to decide what the movie’s like for yourself?
Check out Love, Guaranteed streaming links
via