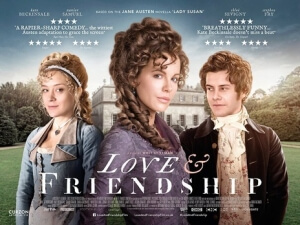 BASICALLY…: The recently-widowed Lady Susan Vernon (Beckinsale) arrives on her brother-in-law’s estate, intent on marrying off her daughter Frederica (Clark) and finding herself a new lover…

Jane Austen may be better known the world over for novels like Pride & Prejudice, Mansfield Park and Sense & Sensibility, but one of her stories hasn’t received as much attention. Lady Susan was written as a series of documents around 1794, but not published until 1871, fifty-four years after Austen’s death; and although the epistolary novel has been adapted a few times previously, mostly for the stage, it’s taken a while for it to reach cinemas as a major release.

It’s thus up to writer-director Whit Stillman, of Metropolitan and Damsels in Distress fame (at least, among the indie crowd), to bring Austen’s obscure title to life in the form of Love & Friendship – named after another unrelated Austen story – and the end results are… interesting, to say the least.

If you’re not caught up with Austen’s bibliography, here’s the gist: Lady Susan Vernon (Kate Beckinsale), recently widowed, comes to the estate of her brother-in-law looking to find a husband not just for herself but for her shy daughter Frederica (Morfydd Clark) as well. She soon captures the attention of Reginald DeCourcy (Xavier Samuel), the brother of Susan’s brother-in-law’s wife (Emma Greenwell), while Frederica is unwillingly saddled with the buffoonish fop Sir James Martin (Tom Bennett). From there, the film is basically a power play for Susan as she talks and walks her way through the expectations of late-1700s society, usually with American confidante Alicia (Chloë Sevigny) by her side, like an Aaron Sorkin script were it written in Edwardian times.

As such, this is not a typical Austen story, nor is it a typical adaptation of an Austen story. Stillman wisely puts the focus much more on the scheming and manipulative nature of Lady Susan than anything else, mostly ignoring some of the author’s more recognisable tropes in favour of a much sharper character study which, at the time, would have been almost unheard of in the world of literature (perhaps this is why Austen never sought to publish it in her lifetime). Needless to say, it is now more than welcome in today’s far more accepting society, and what Stillman does here that’s of particular interest is how he presents a world where women are expected to fit into the norms of society whilst almost always being one step ahead of the men in their life, which to post-modern audiences might not seem so impressive but within the contexts of the time era it is representing on-screen it’s almost revolutionary. Stillman also interestingly represents the novel’s scattered and sometimes incomplete nature; several scenes often end up going nowhere, cetain characters are introduced yet never fully contribute to the main story, and it ends all too abruptly as though there was a significant chunk of the third act missing. This is absolutely not a sign of incompetence, because Stillman is a talented writer and director in his own right, so one has to wonder if he just decided to give us a representation of the source material instead of taking certain liberties with the writing which, given the decidedly feverish behaviour of certain Austen fanatics, would have invoked some kind of anger. Bullet dodged, then.

Like the very best of Austen’s lead heroines, Lady Susan is a fascinating character – even though she is perhaps more of an anti-hero(ine) than the likes of Elizabeth Bennet or Fanny Price. She is manipulative, self-centred and endlessly pulling the strings on everything and everyone around her, all to suit her own needs and desires; she even acts coldly to her daughter Frederica, sometimes dismissing her as a talentless waif and never once truly considering her own feelings about everything her mother claims to be doing for her. She’s not an easy character to like, and rightfully so, but through strong writing and especially a lively performance by Kate Beckinsale, she is never portrayed as a pantomime villain and instead as someone more layered and interesting; think of her as a mixture of Claire Underwood and Cersei Lannister written with the reliably witty prose of Jane Austen.

Her co-stars are also noteworthy; Morfydd Clark is a curious and warm-hearted find as the shy but sympathetic Frederica, Xavier Samuel does fine as the impressionable and likable Reginald, and Tom Bennett all but steals the show as the endlessly idiotic Sir James Martin who is saddled with some of the funniest scenes and lines of dialogue in the film. Also be on the lookout for Jemma Redgrave as Reginald’s kindly mother, and Stephen Fry as Alicia’s party-pooping husband (whom Susan dubs as being “too old to be governable, too young to die”).

All things considered, it is a very good film, one that Austen fans will undoubtedly eat up as a spirited addition to the expanding library of film adaptations of her works; however, anyone who isn’t particularly familiar with Austen’s ways with language and subtle jabs at society expectations will feel very, very lost. The dialogue, as riveting as it is, is spoken in a way that makes things hard to follow, and at times you’ll probably need a handy cheat guide by your side just to understand what’s happening.

But at the very least, Love & Friendship is by far the superior Jane Austen adaptation of 2016, leaving Pride & Predjucie & Zombies in the lurch (though that wouldn’t have been much of a stretch anyway, but this is still pretty good).

Love & Friendship is a fascinating adaptation of an obscure Jane Austen title, with writer-director Whit Stillman injecting a post-modern sense of wit and sophistication into the intriguing story and its compelling lead character, played with gusto and soul by Kate Beckinsale who revels in playing such a wicked and wickedly entertaining anti-hero(ine).