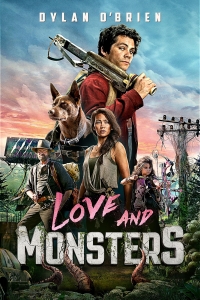 BASICALLY…: After humanity is forced underground by an invasion of monsters, love-struck Joel (O’Brien) decides to venture out into the dangerous new world to find and be with his girlfriend Aimee (Henwick)…

While Godzilla vs. Kong continues to shatter pandemic-era box office records and set new standards for big, dumb monster movie action, along comes Love and Monsters – finally debuting in the UK via Netflix, following a VOD Stateside release last year – to remind us that even films about giant creatures roaming about post-apocalyptic wastelands need a good chunk of heart too.

The film, in development for nearly ten years as writer Brian Duffield – who has since gained a name for himself with scripts for The Babysitter, Underwater, and last year’s underrated teen comedy Spontaneous which he also directed – shopped it around Hollywood before landing it with South African director Michael Matthews, is a very different kind of monster movie than Godzilla vs. Kong. It’s certainly not lacking in the monster department, but it’s also got a ton of lovability at its central system, as well as a surprising emotional depth which immediately makes it a lot more sincere than some of the bigger-budgeted movies of its kind.

Set seven years after a chemical fallout causes the planet’s cold-blooded creatures to mutate into giant ravenous beasts, humanity has been forced into underground bunkers in order to survive. In one such bunker, cowardly 24-year-old Joel (Dylan O’Brien) lives a lonely existence; while everyone else in his shared living space has partnered up, he’s still desperately alone, especially as his high-school girlfriend Aimee (Jessica Henwick) is several miles away in another underground lair. One day, he finally musters up the courage to venture out onto the monster-ridden surface and travel all the way to Aimee’s bunker, and along the way he befriends a dog named Boy, and learns useful survival skills from fellow surface-dweller Clyde (Michael Rooker) and his young companion Minnow (Ariana Greenblatt), which eventually help him conquer his quivering fear of monsters.

It is a very likeable movie, with a simple story and characters who are easily identifiable and even easier to root for. Duffield’s writing is energetic and playful with a palatable sense of humour to go alongside its monster-based action, exemplified by Matthew’s direction which gives it a spring of liveliness as well as a feasible sweetness in its much more tender moments. The film is easily carried by the charm and natural charisma of Dylan O’Brien, whose previous attempts at lead roles in action movies like The Maze Runner and American Assassin fell flat by comparison, thanks to their more generic and less fun scripts which more or less left him out to dry as an actor. That isn’t the case here, since Duffield’s writing gives him a character to play that the audience can very quickly get on board with, because it allows him to not only be funny but also believably human whenever he’s having conversations with his on-screen dog companion (an awesome dog, by the way; Boy is one of the best characters in a movie that already contains a bunch of memorable figures) or even expressive grave fear whenever he’s surrounded by giant creatures.

Speaking of which, the monsters of Love and Monsters are brought to life by some rather outstanding visual effects, which not only make them look and feel so real – even though you can tell that they’re fully CGI, aside from the one or two moments the film uses some convincing practical effects for some of the close-up shots – but also in a strange way give them their own sense of personality. From their creatively warped designs (such as a snail which has since been transformed into a massive gelatinous being with a boulder for its shell) to the fact that some of them can be legitimately terrifying to run into, there’s a lot of work that has gone into making these monsters seem so vibrant and convincing in this crazy sci-fi world, and often they’re quite striking to look at as well as be around. The movie recently surprised many by picking up an Oscar nomination for its visual effects, and honestly it’s not an undeserved call; it manages to mix the creative, photo-realistic monsters designs of a movie like Kong: Skull Island with the atmospheric adventure movie qualities of an older Indiana Jones entry, and it incorporates these effects really well into this vast, post-apocalyptic world.

Most of all, though, the film has a very strong understanding of heart and emotion that makes you want to cling onto this guy’s main journey while also greatly empathising with his desires, as you really do understand why he’s willing to risk his life for Aimee and why he’s so prone to shutting down in the face of imminent monster attacks. Once again, Duffield’s script as well as O’Brien’s strong lead performance has plenty of humanity to spare as it explores some emotional themes of family, unity and learning to stand up against your biggest fears, all of it told with enormous sincerity and even some rather sad overtones; there’s a scene where the main character meets a cheery robot, which is way less ridiculous than it sounds and might even leave you with a slight tear by the end of it. Its strong grasp on the humanity of its lead character guides us all the way through to the final act, which is where the film falters slightly as it introduces an unnecessary last-minute villain which screams of being added late into the script process, just to give more of a sense of threat in a movie that already has giant, deadly monsters roaming about everywhere.

Even when the film doesn’t entirely work, you can still sense a fun and rather nice sense of adventure and ambition that has gone into this script and direction, which makes Love and Monsters both an entertaining crowd-pleaser as well as a massively engaging and surprisingly human monster movie. It’s the perfect antidote for those who couldn’t get into the denser action of Godzilla vs. Kong, and instead want a film about giant creatures with a bit more thought in its head.

Love and Monsters is an entertaining and highly likeable monster movie which contains a fair amount of monster action, as brought to life by some impressive visual effects, and plenty of humanity with its simple story, likeable characters and a surprising amount of heart and sincerity.

Love and Monsters is now available on Netflix.