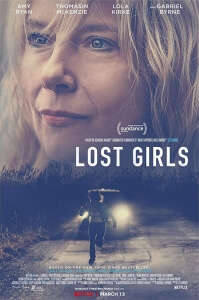 BASICALLY…: As she investigates the disappearance of her daughter, Mari Gilbert (Ryan) uncovers a wave of unsolved murders of young women…

The Long Island serial killer, who killed several women – many of them sex workers – over the course of fifteen years, is just one of many unidentified murderers in American history, and like all the others they have left so many innocent victims in their wake.

One of them, a young woman named Shannan Gilbert, became instrumental in uncovering the killer’s wrath, and it was largely due to the advocacy of her mother Mari Gilbert that not only led the authorities to eventually uncover her body, but several other bodies as well, uncovering the killer’s dumping ground. It is Mari’s efforts that serve as the focus for the enticing docu-drama Lost Girls, a stern and raw thriller that is anchored by emotion and a fierce lead performance.

The film kicks off in 2010, when Mari (Amy Ryan) and her two younger daughters Sherre (Thomasin McKenzie) and Sarra (Oona Laurence) become concerned when Shannan does not arrive home for a planned family evening. They notify the police, but they prove ineffective which causes Mari and her daughters to kick-start their own investigation, leading them to an enclosed beach community in Suffolk County, New York that might hold the key to Shannan and other missing sex workers’ disappearance.

Uncovering the identity of the killer is not the film’s ultimate target – and if it was, then this would have been an incredibly unsatisfying watch – but is instead to shed light on the victims and their families, all of whom are trying to cope with their losses in different ways. While Amy Ryan’s Mari is fiercely committed to digging her way to the bottom of the investigation, others choose more sombre methods of coping, such as organising a vigil on Facebook or swapping stories about their slain daughters and sisters like they would at a group therapy session. You get to see the serious emotional toll that their deaths have taken on these people, much of it coming from how each of them feels like they failed them in some way; even our lead character bears this burden, as we learn more and more about her tumultuous history with her missing daughter and how her own misgivings as a mother caused Shannah to lead the life she led. That alone gives the film a more empathetic shoulder than some other crime dramas, because while it never loses focus on the main case at large it also never forgets to acknowledge that the people who were killed were human and deserved to be labelled better than “prostitute” or “escort”.

As for the central investigation itself, it’s a bit of a bumpy ride; anyone who knows about this story going in will probably get what they’re expecting, but those who don’t possess prior knowledge and are hoping for at least some straight answers with this case might not find what they’re looking for. It does leave a lot of unanswered questions dangling from the ceiling, which for a case where the killer has yet to be identified is a reasonable enough approach because it keeps the mystery alive, but there are certain ones such as the true nature of this closed community, what they have to hide, why some of them act as though they know exactly what went down, and others which are not gone into as much detail as one would have liked. Even if everything about it was taken from what was actually uncovered (in this case, not that much), it doesn’t always make for a thrilling narrative when it intentionally leaves what should be said unsaid.

However, it is made extra thrilling by the commanding lead performance of Amy Ryan, in a role that the actress completely sinks her teeth into with added gusto. It’s kind of like an alternate universe version of her Oscar-nominated role in Gone Baby Gone, where she also played the trashy mother of a missing child, but in this reality it’s as though she got fed up with Casey Affleck investigating the case and just decided to do things her own way; as amusing as that head-canon is, though, Ryan does make this role vastly different with the kind of ferocity and hot-tempered assertiveness you’d find on an average episode of Jersey Shore, albeit in a far more respectable manner. She holds this movie together with her bare hands, guiding the audience through every single scene and demanding their attention every time she’s on-screen.

While it isn’t a perfect narrative, from the lack of concrete answers to the somewhat underwhelming conclusion, the movie is interesting enough for you to at least do a bit more research on the murders in your own spare time (and lord knows, there’s a lot of that going around right now), and of course Amy Ryan’s performance is so good that it can make you look past some of its bumpier moments in the script. It’s worth checking out on Netflix when you can, if you’re in the mood for an intense crime thriller that’s as well-made as it is well-acted.

Even if the killer never gets caught, this movie still serves as a hopeful reminder that their victims should not, and shall not, be lost to the ages as they have, and as long as their memories stay alive then there is every chance that one, day, at long last, justice will be served.

Lost Girls is a raw and emotional crime thriller which sheds light on the numerous victims of the as-yet unidentified Long Island serial killer, led by a powerful lead performance by Amy Ryan which is good enough to make you overlook some of its bumpier narrative flaws.