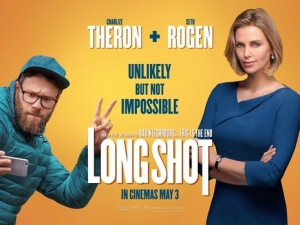 BASICALLY…: Journalist Fred Flarsky (Rogen) connects with his former babysitter Charlotte Field (Theron), who is now the Secretary of State and a potential presidential candidate…

Just as he did for animated films with Sausage Party, star and producer Seth Rogen now aims to reinvent the traditional Hollywood romantic-comedy and inject it with his trademark off-kilter stoner humour – and once again, it’s a solid reinvention.

Rogen stars alongside Charlize Theron – also a producer on the Jonathan Levine-directed film – in a fresh, crowd-pleasing spin on an old formula that sees both the major Hollywood players truly sparkle in ways that have never been glimpsed before, and share a truly sweet and heartwarming chemistry that more than strong enough to carry the film all the way to its conclusion. Luckily, it also happens to be a very funny movie, with plenty of sly satirical stabs at various parts of our real-life intake of media, all from a smart and quippy script that helps it overcome the occasional cliché.

Rogen is Fled Flarksy, a disgruntled and deeply opinionated journalist who stubbornly quits his job as a reporter when he learns his outlet is being purchased by media titan Parker Wembley (Andy Serkis, unrecognisable under heavy make-up). Meanwhile, Theron is Charlotte Fields, the US Secretary of State who is on the cusp of being endorsed by the sitting President (Bob Odenkirk) for the presidency, when he reveals he won’t be seeking re-election in order to follow an acting career. Both Flarsky and Fields seem like polar opposites – and in many ways, they are – but they have a mild connection; Fields was Flarsky’s babysitter many years ago, until an embarrassing incident left him unable to shake off his feelings about her. The two reunite at a party, and against the advice of her team members she brings him on to punch up her speeches, causing a mutual attraction to grow between the pair, despite their clear differences in both personality and candour.

It’s a film that smartly plays with your expectations; after all, it’s a Hollywood romantic-comedy, so there has to be at least one person out there who’s going into this with some idea of how it’s all going to play out. Very early, it’s clear we’re getting something a little different than what we’re used to with this kind of genre – not many rom-coms can claim to have an opening scene where one of the romantic leads gets half of a swastika tattoo done on their arm, or a much later scene where the other lead has to negotiate a hostage release, all while being completely stoned and barely functioning – and it not only works but it also gives itself a fresh, entertaining and extremely funny new identity in the process. The script, by The Post’s Liz Hannah and previous Rogen project The Interview’s Dan Sterling, neatly mixes political savviness with intelligent satire; one of its many targets is conservative media, with blatant parodies of Fox News and Rupert Murdoch – the latter personified by Serkis’s character – quietly dominating the news cycle with enough power to even influence certain politicians (sound familiar?), and how the world as a whole tends to treat women of power as either stone-cold bummers or shrill ball-busters. It approaches these topics delicately, allowing us to laugh at their ridiculousness while also being reminded that they are very real things happening in the world that just happen to be played up here for laughs, and honestly even if the film wasn’t about this particular love story then it would work just fine on its own with its sharp commentary alone.

Fortunately, it works even better as a romantic-comedy, because the chemistry between both Rogen and Theron is absolutely wonderful; they bounce off of each other very well, and you can clearly see the spark between them that eventually causes them to grow closer together, even when other characters cannot – or even refuse to – see it for themselves. Theron has done plenty of comedic roles before, working for the likes of Seth MacFarlane and Jason Reitman in the past, but under Levine’s direction and with Rogen’s heartfelt on-screen support she is utterly hysterical here, including in the aforementioned hostage negotiation sequence, but also really genuine and more laid-back than most other films recently have allowed her to be. Both she and Rogen, who himself has rarely delivered a fun comedic performance, share sides of their acting that they probably hadn’t been able to exhibit before in a movie, particularly Rogen who surprisingly holds strong as a romantic lead and honestly should be given more chances to be in these types of movies, because here he shows he’s actually rather good at it.

It’s a smart and entertaining film, with a central romantic couple you actually do care about, and supporting characters that are also about as much fun – O’Shea Jackson Jr. is a hoot as Rogen’s best friend, while June Diane Raphael is most amusing as Theron’s steely-eyed and heavily judgemental aide – and while the film tends to lag a little bit in certain parts (it’s a film that’s just over two hours long, and you can feel that some scenes probably should have been cut, if not trimmed down) it’s an enjoyable new rom-com that’s not afraid to take things to the next level.

So, Rogen can now cross the traditional Hollywood romantic-comedy off of his list of genres to inject his signature brand of humour into; hopefully, he’ll set his eyes on old-fashioned musicals next, if only to hear him sing a melody to his beloved bong…

Long Shot is a smart, funny and entertaining new take on the traditional Hollywood rom-com, with essences of intelligent political satire mixed in with a genuinely sweet love story, brought to life by the sizzling pair of Charlize Theron and Seth Rogen.

Check out Long Shot showtimes in London
on Walloh.