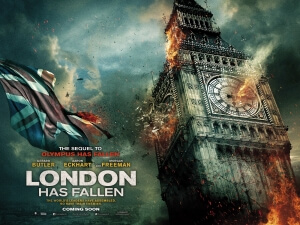 BASICALLY…: Whilst in London for the Prime Minister’s funeral, Secret Service agent Mike Banning (Butler) and US President Benjamin Asher (Eckhart) find themselves in the midst of a terrorist attack…

There’s been a lot in the news lately about certain minorities and hostilities towards them. We’ve seen it as thousands of refugees have fled war-torn countries and ended up in the now-defunct “Calais Jungle”, only to be met with severe disapproval from EU specialists and the authorities who have all but told them to bugger off somewhere else; and several themes of mass deportation and extreme separation of all Muslims, Mexicans and other minorities have been recurring stapling points of Donald Trump’s current ideology. In both instances, the xenophobia is nothing short of horrendous, and it’s frankly upsetting to think that in this day and age thousands upon thousands of people would actively agree with any of these mindsets (Trump in particular; can someone PLEASE make sure he never gets to the White House?).

Films like London Has Fallen, the sequel to the surprise box office hit Olympus Has Fallen, absolutely do not help the argument of those opposed to the hostility in any way.

The film presents a narrow-minded, paranoid, and slightly disturbing perspective on the rhetoric of current xenophobia, and bombards the paying audience with uncomfortable ideals under the pretence that it’s all in the name of Lady Liberty. This is the kind of film that opens with a mostly-innocent wedding in Pakistan being blown to pieces by a US-operated drone strike, with the shot immediately after being that of the American flag waving its proud self all over the screen; sandwiched in between is the white American hero – who’s such a red-white-and-blue-blooded American that he’s played by Scottish actor Gerard Butler – sadistically killing every single person he comes across who looks fairly dodgy, most of them being every single minority cast in the film; and then closing things out with Morgan Freeman (as Vice-President Trunbull, a role that Freeman reprises from the first film) giving a great big speech about the importance of mass-murdering drone strikes against the apparent enemy of everyone who isn’t an American.

Seriously, all that’s missing is for Trump himself to come out just before the credits roll, give a thumbs up and say to the camera “I approve this message”.

Relentless in honouring such a black-and-white perspective on racial profiling, London Has Fallen isn’t so much a satisfying sequel – which it certainly isn’t – rather than it is a thinly-disguised propaganda movie for right-wing nutjobs, not unlike film-within-a-film Nation’s Pride in Quentin Tarantino’s Inglourious Basterds. However, that fictional piece of WW2 cinema glorified Nazis, while this actual piece of modern cinema is somehow more offensive in how it shows pretty much everyone who isn’t an aggressively hot-blooded American as an untrustworthy, potentially deadly threat to the fifty states that must be destroyed for the greater good – or, to paraphrase Butler’s character, “go back to Fuckheadistan”. It’s actually quite ugly when you think about it, especially when it’s coming from people who originally wanted nothing more than to make a clone of Die Hard set in the White House (incidentally, the events of the first film are oddly never even mentioned in passing here, so one has to assume that Korean terrorists occupying the Oval Office and murdering thousands of innocent civilians was just another day for these people).

While the script is filled with uncomfortably patriotic anecdotes, the direction enforces the stoic tone through sheer un-pleasantries and occasional incompetency. Babak Najafi takes over from the first film’s director Antoine Fuqua, and it’s appropriate that his filmography to date also includes Easy Money II: Hard to Kill because this film, given its quality and production values, feels like it should have been direct-to-DVD instead of being trotted out to cinemas nationwide. Though Najafi does spare us some incredibly frustrating, A Good Day to Die Hard-levels of shaky camera work for the most part, he still gives the film a slow and ultimately joyless tone that presents its multiple action set-pieces as absolute slogs rather than adrenalin rushes, with some of the worst CGI we’ve seen in a straight action film in years that’s used on everything from helicopter crashes to actual blood, when at least one of those things could have been done practically. It’s also a very inconsistent movie, with streets being filled with civilians minding their own business as usual despite a very obvious TERRORIST ATTACK – which makes one assume this was filmed wildly out of sequence, or the continuity person on-set was off sick that day – and in later scenes characters racing through the streets that are wet with puddles one moment and then completely dry the next, which makes this something of an editing nightmare.

It’s all a bit of a shame, because while Olympus Has Fallen wasn’t a great movie by any means, it was a reasonably entertaining B-movie that wasn’t afraid to go where softer, PG-13 action films were too mild to go before. London Has Fallen, however, is not only a rubbish sequel, but one that takes the xenophobia it presents and glorifies it to increasingly uncomfortably levels that make this an essential addition to Donald Trump’s private collection of pornography.

And yet, it was still easier to sit through than Grimsby…

London Has Fallen is a grossly xenophobic action sequel that glorifies its sadistic violence and attitudes to anyone that isn’t a red-white-and-blue-blooded American, also suffering from inept direction that doesn’t even provide us with the simple luxury of having it be brainless fun instead of the uncomfortable right-wing propaganda piece that it is.