London To Fall In Olympus Has Fallen Sequel

London To Fall In Olympus Has Fallen Sequel

In this year’s most notable David vs. Goliath story, David unexpectedly came out on top over its 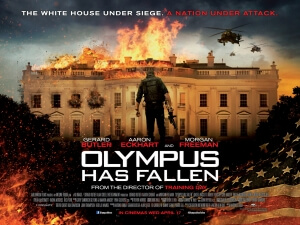 bigger competitor. Olympus Has Fallen, directed by Antoine Fuqua and starring Gerard Butler, Aaron Eckhart and Morgan Freeman, was expected to outright bomb next to the other Die–Hard-In-The-White-House movie this year, Roland Emmerich’s White House Down which had bigger names like Channing Tatum and Jamie Foxx on board. But, amazingly, Olympus became the most financially successful of the two, grossing nearly $100 million in US domestic box office numbers while White House Down didn’t even make it to $75 million (Emmerich’s film did, however, have the bigger worldwide intake with $204 million compared to Olympus‘s $161 million).

That’s about as big a success story needed to warrant a sequel, and that’s exactly the case.

It has been announced that Olympus Has Fallen will get a follow-up, with Butler, Eckhart and Freeman all set to return. But it seems, judging by the sequel’s title London Has Fallen, it’s all going to be at our expense (movie-wise, of course).

The sequel, written by original writers Katrin Benedikt and Creighton Rothenberger, will see President Asher (Eckhart), accompanied by Secret Service agent Mike Banning (Butler) and Speaker of the House Allan Trumbull (Freeman), attending the funeral of the British Prime Minister. As you might expect, not all goes according to plan as a terrorist strike puts Banning in a tight spot yet again and is forced into action. A new role for an MI6 agent, who reportedly teams up with Banning, is yet to be cast.

Production begins next May, with a possible 2015 release date in sight. Fuqua is not returning to direct, and a replacement is being sought after by studio heads.

While Olympus Has Fallen wasn’t the most sophisticated action movie of the year, it was still an enjoyable one and remains something of a guilty pleasure to some audiences (not to mention, it did a far better job at being a Die Hard movie than the actual Die Hard movie this year…). Let’s just hope that London Has Fallen takes it easier on the capital than a lot of other recent action movies – honestly, did you see the destruction of the city in G.I. Joe: Retaliation? The huge bomb in Star Trek Into Darkness? Even Greenwich gets its arse handed to itself in Thor: The Dark World. We don’t know what Hollywood has against London nowadays, but it’s clear they’re out to destroy us in movies. And a title like London Has Fallen doesn’t exactly hint at everything being fine and dandy, either…