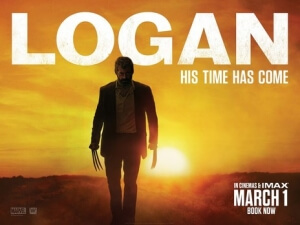 BASICALLY…: Logan aka Wolverine (Jackman) is tasked with protecting a young mutant (Keen) who has powers that are eerily similar to his…

To say that Fox’s spin-off film series of one of the most popular X-Men characters has been a little problematic in its early stages would be to undermine how roughly nurtured it actually was. The first film, X-Men Origins: Wolverine, is seen by many fans as a pure slap in the face to the beloved character and franchise (and the less said about Deadpool in that film, the better), while the second, director James Mangold’s Japan-set The Wolverine, was a marked improvement but ultimately a forgettable one. So, for its third and final film Logan – which sees the return of Mangold to the director’s chair and, more significantly, Hugh Jackman in his final appearance in the role he has frequented since 2000 – they’ve really pushed the boat out to make it as grand a send-off as possible, to make up for its misfiring earlier entries.

Did they succeed? Well, not only is Logan easily the best out of the three, but it sets a new standard for the adult superhero film that even ones like The Dark Knight were unable to touch, at least in terms of its on-screen brutality. It’s not a perfect film, though to say much more about that would be to open things up to spoilers, but it really does ensure that Jackman’s Wolverine goes out on a high note.

In keeping with the series’ ever-changing timeline, Logan is set sometime in the near future, where mutants are on the verge of extinction and those still alive are in hiding. One of the latter is, of course, Logan aka Wolverine (Jackman), who’s now a bearded, alcoholic shadow of his former self, spending his days as a limo driver and, with the assistance of fellow mutant Caliban (Stephen Merchant), caring for an ailing, Alzheimer’s-ridden Charles Xavier aka Professor X (Patrick Stewart) around the Mexican border. Their misfortune changes when Logan is soon assigned to escort a young girl by the name of Laura (newcomer Dafne Keen) to a mysterious mutant sanctuary in North Dakota, but as they are pursued by a thuggish band of cyborg mercenaries, led by Boyd Holbrook’s Donald Pierce, it becomes apparent that there’s more to this young girl than was first let on – and, wouldn’t you know it, she happens to possess mutant powers that are eerily similar to that of Logan’s. So, the road trip is on, with body parts and swear words thrown about every which way as Logan, Charles and Laura make their way to journey’s end.

From the very first scene, and even the very first line of dialogue, you know that you’re in for a wildly different kind of X-Men film; it’s sweary, harsh, and pretty damn gory, a far cry from the more accessible films of the franchise like, say, X-Men: First Class. But make no mistake, this is not Deadpool, but instead a much darker, grimmer vision of a superhero universe than anything in the Marvel brand to date. This is a film where people kill others in pretty gruesome ways, swear up a storm, and have no ounce of hope in their system – and that just describes the “superheroes” here. If Deadpool was an adult superhero film that appealed to audience’s inner childishness, Logan is one that appeals to their inner yearning for maturity, and Mangold does some very understated work here that allows the harshness of this world to seem uncomfortable but also very real at the same time, more so than any other X-Men film to date. An interesting aside is how, in this universe, the X-Men comics actually exist as a fictionalised account of missions the characters went on in the past, which doesn’t go too meta but offers a fascinating idea of the legacy that Wolverine, along with all the other mutants in this world, are leaving on this increasingly bleak world.

The violence is dialled up to eleven this time, with heads, arms and legs being severed by Wolverine’s adamantium claws, and while there are times it threatens to become too excessive, it’s still extremely satisfying to finally see this character go ballistic without toning things down, something that Mangold really takes advantage of when filming action sequences or any other moment of random antagonism. Clearly having a blast with all this is Jackman who, in his proclaimed final appearance in the role, delivers his best performance as the character to date, finally being able to explore the anti-hero’s dark side without limitations, and presenting a portrait of this person he’s been playing for 17 years that’s more vulnerable than ever, both physically and mentally. His darkened view on the world is as rough as his beard, which reflects on his growing inability to heal from wounds and even contemplating suicide via an adamantium bullet. As Wolverine, Jackman has never been more powerful in his vulnerability, and manages to give him the proper send-off that he and the character’s many fans have been wanting for years. Patrick Stewart, too, gives his most layered rendition of Professor X to date, and if like Jackman he does indeed intend to retire from the role after this film, then he too will go out better than ever; and special mention must go to newcomer Dafne Keen, who in one feature film credit to date manages to steal scenes from thespians like Jackman, Stewart, and Richard E. Grant who pops up in a villainous role.

As a trilogy closer, especially for one that started on a bum note, it’s a hugely satisfying conclusion. As an X-Men film, it’s by far one of the most nuanced and emotional in the series to date. As a send-off to a beloved on-screen comic book character, portrayed by one of today’s most popular actors, Hugh Jackman could not have wished for a better way for everyone, himself included, to properly say goodbye. Until the next time, Logan (or at least, until the next actor)…

Logan is a brutal but thoroughly satisfying send-off to Hugh Jackman’s portrayal of the popular X-Men character, which finally allows him to go berserk with the strong adult violence and bleak darkness to the character, delivering arguably his best performance in the role and making this a strong and entertaining adult superhero movie.