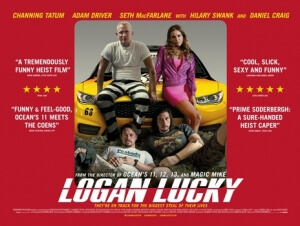 BASICALLY…: After being laid off from work, Jimmy Logan (Tatum) organises a plan to execute a robbery at the Charlotte Motor Speedway during the busiest weekend of the year…

If there’s a lesson to be learned from Steven Soderbergh’s initial announcement of his retirement from filmmaking back in 2013, and then his swift return to the foray only four years later, it’s that one should always take retirement in Hollywood with a pinch of salt. Although, the Oscar-winning director had some pretty bold reasons for coming back to make Logan Lucky; according to Soderbergh himself in recent interviews, he really did intend to leave the game after becoming disillusioned with the new studio system and lack of creative control given to filmmakers, but once he received this film’s script by an unknown writer named “Rebecca Blunt” (rumoured to be a pseudonym, though for whom is currently unknown) he not only wanted to make it, but he decided to fully bypass the studios and self-distribute with his new company Fingerprint Releasing. That way, he and all members of the cast and crew could recuperate at least half of what the movie earns at the box office, instead of larger percentages going to the studios that would have funded the whole thing.

Basically, Logan Lucky is Steven Soderbergh’s middle-finger to the standard Hollywood releasing system, and if it does well enough – which, sadly, doesn’t look that likely given its current box office numbers – the plan is for Soderbergh to make plenty more films that are made and released in this exact way. Even if it doesn’t do well, at least they made a fairly entertaining movie to generously give the audience.

Our main character is Jimmy Logan (Channing Tatum), a blue-collar construction worker in West Virginia who, after being fired for having a pre-existing condition – he has a permanent limp from a previous injury – comes up with a lucrative scheme to rob the cash-filled vaults of Charlotte Motor Speedway. He enlists his brother Clyde (Adam Driver), a war veteran with a prosthetic arm, his sister Mellie (Riley Keough), a lowly hairdresser, and incarcerated safecracker Joe Bang (Daniel Craig) along with his two dim-witted brothers (Brian Gleeson and Jack Quaid), in a scheme that will see them penetrate the Speedway’s intricate security system, and involves a prison break, a stolen car, and two bags of Gummi Bears.

While a lot of it is certainly played for laughs, mainly at the expense of the main characters’ redneck lifestyles as well as some of their odd quirks and occasional blatant stupidity, it has a good enough heart to get you invested in their plight and be no less entertained by how it all ends up transpiring. Soderbergh’s trademark dry wit is all over this movie, with the actors delivering a lot of their lines in the straightest way possible without going too overboard (the closest anyone gets to being completely over the top in this movie is Seth MacFarlane in what is basically a glorified cameo as a British businessman), but when it wants to it can raise some serious laughs, such as a prison riot negotiation over the publication of the last two unpublished Game of Thrones books, and a mid-heist science lesson from an unlikely source. It’s hard to tell if most people will be laughing along with it, because it’s likely that some will find it so dry that they might mistake it for a comedy dead-zone, but it depends on what you’re in the mood for at the right moment; therefore, it’s perfect if what you’re after is something a bit drier and more straight-faced than the average comedy. I certainly found it amusing enough to be satisfied with its wholesome intentions, and to forgive it for a small number of its real flaws, like the main plot which can be far too convoluted and precise to be truly believable.

Despite that being an instance of the film being perhaps a bit too smart for its own good, I did thoroughly enjoy how this plan was being executed, and with whom it was involving. Tatum and Driver are both very understated in their roles here, which both of them have proven by this point to do almost flawlessly, so as far-fetched as some of the plotting by these characters can seem it’s also strangely easy to see them come up with something this well thought-out. Of the supporting players, Daniel Craig has never been funnier in a role, dying his hair blonde and speaking in a slightly higher-pitched (and a touch more effeminate) Southern drawl that’s as far away from James Bond as you can imagine, and he gets some of the biggest chuckles of the film in parts where you least expect it. Most of the others are delegated to roles that aren’t as interesting, or not given enough screen time to fully make an impression; Katie Holmes shows up as Tatum’s disgruntled ex-wife and isn’t given much to do except be the disgruntled ex-wife, and Hilary Swank appears much later in the film as an FBI agent determined to bring the criminals down which, given that Swank has a knack for playing some of the most unlikeable characters in a film, would be perfect if maybe she was in it for a bit longer.

While I wouldn’t call Logan Lucky a comic masterpiece or anything, it’s an amusing film that’s entertaining for long enough for you to feel somewhat satisfied with its dry wit and tightly planned execution, and for what it’s worth it’s just great to see a Steven Soderbergh movie in cinemas again, after what feels like too long a time away from the craft.

Logan Lucky is an amusing crime caper that marks a solid return by director Steven Soderbergh after a four-year absence from filmmaking, and displays the director’s trademark dry wit and intricate plotting that, while slightly far-fetched at times given the simple nature of the characters, is entertaining enough to leave you satisfied with the end results.