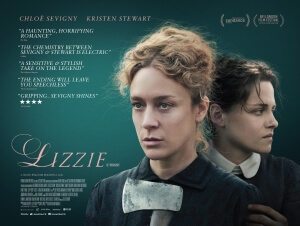 BASICALLY…: Lizzie Borden (Sevigny) is driven to a malicious act when she is pushed a step too far…

“Lizzie Borden took an axe, And gave her mother forty whacks. When she saw what she had done, She gave her father forty-one.” So goes the nursery rhyme inspired by the mystical figure of Lizzie Borden, a woman who became notorious in the year 1892 for being the prime suspect in the murder of her father and step-mother and then being acquitted in the courts despite the overwhelming evidence (she was basically the OJ Simpson of her day). However, what some people don’t realise is that the rhyme is filled with inaccuracies, specifically how Lizzie is said to have struck her step-mother seventeen times instead of forty, and her father even less than that; but these are facts nobody seems to really care about, because it’s much more fun to sensationalise a story like this and turn the narrative into a gothic tale of sociopathy in late 19th century America.

Lizzie, the latest form of media to try and dive deep into the mindset of this historical figure, is a little like that rhyme; short and (mostly) direct, but at the same time is filled with facts that might not be entirely true, and ultimately not memorable enough to make itself last long in most people’s collective memories.

Beginning around six months before the murders, Lizzie Borden (Chloë Sevigny, who also produced the film) is shown to have a pretty torrid family life, living under strict conditions by her strict and domineering father (Jamey Sheridan) and with a step-mother (Fiona Shaw) who she does not take too kindly too. It’s not until the arrival of Irish maid Bridget Sullivan (Kristen Stewart) that Lizzie finds someone she can forge a true connection with, but their relationship develops into something dangerous as Lizzie is driven further and further over the edge by her tyrannical father and her unsympathetic family, leading to the event we all know is just waiting to happen.

The movie, however, takes its sweet time before we get to its depiction of the very thing that Lizzie Borden is best known for; a whole movie, in fact, as we don’t get to see the pretty gruesome and disturbing murders until much closer to the end. Until then, we are subject to a handsomely crafted but ultimately rather dull costume drama that has noble ambitions – in that it wants to explore the very essence of this person and why she did what she most likely did – but doesn’t have an interesting enough execution to get you to care. It’s a shame that’s the case, because its intentions are certainly bold; you can tell that this is setting itself up to be a post-modern autopsy of the woman at the centre of these heinous crimes, exploring the possibilities that she was driven to her malicious acts by several things including a queer attraction to Bridget and the overwhelming control over her by all the male figures in her life, which are all interesting angles to take with this story. The latter part is especially gripping, as you see her father throughout this movie prove that he’s probably a much creepier person than his murderous daughter; he’s a stubborn man filled with pride, who isn’t afraid to berate his daughter any chance he gets through some painful verbal and sometimes physical abuse, and if that wasn’t enough he’s also shown to repeatedly molest Bridget whilst she lays in bed. Later, we get to meet her uncle (Denis O’Hare) who proves to be just as snivelling and unpleasant as he tries to con her family out of a large amount of money, and even almost rapes Lizzie when she confronts him about it. Seriously, if you were in her shoes and had to go through some of the stuff she does in this film, you’d probably want to take an axe to a couple of skulls as well.

The suggestion seems to be that the overwhelmingly negative male influences in her life were a primary reason for her eventual killing spree, which is a fair statement to make, but where the movie falls flat is asking us to completely side with Lizzie Borden as she’s going through all of this, like she’s the true victim here. However, Chloë Sevigny’s Lizzie is still portrayed as someone with very few emotional capabilities, and a cold personality to go along with her sociopathic tendencies. Even though she is depicted as someone so suppressed by the system she is trapped in, she never gains our sympathy because, at the end of the day, she is still someone who committed cold-blooded murder and seems to experience no remorse for any of it. It’s odd, because one moment the movie is asking us to sympathise with her as she continues to be subject to one horrible thing after another, and then the next minute you’re being told that she’s an emotionless psycho that probably deserves every bit of it. That makes it a tonally difficult pill to swallow, especially since Sevigny is actually very good in the role, playing against certain expectations that one might have for this kind of character but also selling the steely stare she gives most people in this film, including her would-be lover played by an equally strong Kristen Stewart (although her Irish accent does tend to slip every now and then).

Overall, though, the movie just isn’t that interesting to talk about. I honestly struggled quite a bit to fill out this review with details about the film, because there’s really not a whole lot to actually say about it; it’s well-acted, and it’s nicely shot, but it moves at such a slow pace that by the time you do get to see the bloody and disturbing murders play out on-screen, any real interest you may have had in this story is all but gone. It’s not going to be a film that I, or anyone for that matter, will remember years from now, and it’s certainly not going to go down in history as the definitive film about Lizzie Borden, either. Like that rhyme from earlier, it’s just going to go in one ear and out the other for a lot of people.

Lizzie is a mostly dull and forgettable costume drama that has noble ambitions in wanting to explore the psychology behind Lizzie Borden and the murders she would become associated with, but it’s not done in an interesting enough way to really grab your attention for most of it, outside of some strong lead performances by Chloë Sevigny and Kristen Stewart.