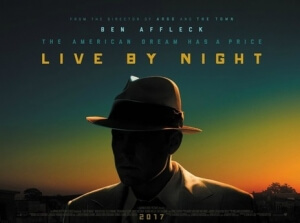 BASICALLY…: Boston outlaw Joe Coughlin (Affleck) quickly rises in the ranks as a notorious criminal during the Prohibition era…

Ben Affleck’s career resurgence as a celebrated director is well documented by this point, and after three previous projects behind the camera like Gone Baby Gone, The Town and especially the Oscar-winning Argo, he has more than made his mark as one of the few actors-turned-directors that can seemingly do no wrong.

However, his fourth film as director, an adaptation of author Dennis Lehane’s gangster novel Live By Night, hasn’t been receiving quite the same appreciation as his other films, and is being considered by many to be his first major disappointment as a director. To me, while it certainly isn’t up to the standard as, say, Argo was, it still remains an interesting, if long-winded, gangster epic that shows Affleck’s own strength for letting scenes and characters breathe while also allowing him to indulge in classic crime movie tropes that only he can somehow seem fresh and new again.

Affleck also writes the adaptation (his first solo writing credit), and stars as the central figure Joe Coughlin, a Boston outlaw during the Prohibition era who quickly rises to prominence as a successful bootlegger and rum-runner in Tampa, Florida, and who also runs afoul of Irish and Italian mobsters for several different reasons. The film charts his rise from being the criminal son of a respected police captain (Brendan Gleeson), to a hard-boiled gangster who makes his mark on the Floridian backdrop, while examining whether there is a shred of humanity left within him.

This is not the first time Affleck has adapted from a Lehane novel, which was for his directorial debut Gone Baby Gone, but Live By Night is a noticeably more complex story than that one was, taking cues from other gangster epics like The Godfather and The Untouchables which tends to undermine this story’s credibility, because we’ve seen these plot beats before in other films, and done better. Affleck’s film has the same problem, and even more so this time round because Lehane’s story is now a film, which people such as myself are far more susceptible to than books, and can thus spot these familiar tropes more easily and can pick apart with an alarming amount of ease. It really is one of those films that you know inside and out, about the small-time crook who rises from nothing to become a powerful player in organised crime, only this one has more people interested in it because Ben Affleck is directing it. If you are in any way sick of these kind of crime films, then Live By Night is sadly not for you, as you will be sat there impatiently waiting for the film to move onto the next cliché.

It’s also the kind of film that really likes to take its time with a lot of things, which would be fine if the lead character was extremely engaging or the things he goes through were engrossing, and sadly they’re really not. Though Affleck does fine in the lead role, the character of Joe Coughlin is very one-note and not as interesting as the film thinks he is, and the fact that you have to spend almost an entire movie with a character like this who’s rather bland and the kind of character you’ve seen in this type of movie before, leaves you really feeling that two-hour running time because you’re not as invested as you should be. If anything, you’re far more interested in the side characters, like a crime associate played by Chris Messina who acts as Coughlin’s right-hand man for the majority of the film and who is quite a bit of fun, and a young would-be starlet who’s played by Elle Fanning and who later on becomes the kind of hardcore Evangelical preacher you would expect Kirk Cameron to present alongside with. Fanning, in what little screen-time she has (which honestly isn’t that much), is truly great in this movie, and she delivers a powerful monologue in one of the best scenes in the entire movie with almost impossible ease, which kind of almost makes you want to see a film about this character instead of the generic mobster figure that Affleck is playing.

If Live By Night does prove anything, however, it’s that even when the material isn’t entirely up to standards, Ben Affleck will still direct the holy hell out of it. It’s an extremely well-made film, from the cinematography to the set design, and part of what makes a lot of this movie work, even against its better judgement, is Affleck’s tight attention to detail and to what makes a scene particularly entertaining. When a chase scene occurs or whenever people are shooting at each other, it’s genuinely gripping and paced really well; when a moment of violence is shown on-screen, it’s gruesome and sometimes even haunting to look at; and whenever an actor has to deliver a monologue like Fanning does, by God he will give them the right notions to make their performance stand out. This may be his weakest film to date as a director, but even still Affleck does whatever he can to make it look and feel better than it probably is, and for the most part he succeeds (it makes you wonder how he’ll manage to pull off that currently in-development Batman movie he’s currently attached to, because even if that movie sucks at least it will be one of the better-made Batman films).

Although it doesn’t rank quite as high as some of his other films, due to its fair share of flaws in the narrative and character department, Live By Night is still worth checking out if you want to see a particularly well-made crime movie that doesn’t do much new, but looks amazing as it’s doing nothing new.

Live By Night may be Ben Affleck’s weakest film to date as a director, due to some familiarity in the plot and a not-very-interesting lead character, but it’s still so well-made that it’s worth recommending just for its technicals alone.