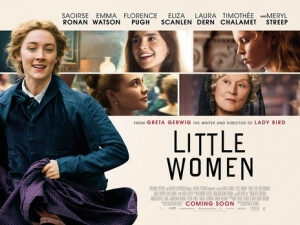 BASICALLY…: In 19th century America, four sisters (Ronan, Watson, Pugh and Scanlen) come of age in their own unique ways…

Like many adaptations of classic literature, including Louisa May Alcott’s semi-autobiographical novel Little Women which has been made for the screen countless times, prior knowledge of the source material isn’t required but it certainly helps to give an idea of the story that the original author wanted to tell. Although, in the case of writer-director Greta Gerwig’s version of the tale, it practically lays it all out for you so there’s not really a need to point out what’s missing from the author’s original intentions.

What Gerwig does with her version of Little Women, other than make it a damn fine follow-up to her acclaimed debut feature Lady Bird, is that she takes both the fact and the fiction, and meshes them together to create a much broader picture that not many other adaptations have done before. It’s impressive stuff from a creative standpoint, and the film has so many further attributes that it’s completely impossible to resist.

Adopting a more non-linear approach to the story, we begin with the March sisters – Jo (Saoirse Ronan), Meg (Emma Watson), Amy (Florence Pugh) and Beth (Eliza Scanlen) – well into their young adulthood. Jo is a struggling writer living in New York; Meg is married to kind-hearted but penniless tutor John Brooke (Jim Norton); Amy is studying to be an artist in Paris with her Aunt March (Meryl Streep); and Beth… well, if you know the novel, then you’ll probably already know she’s not in the best of shape. The film frequently cuts back and forth from their present lives to seven years prior, when all four were young and living under the same roof with their mother Marmee (Laura Dern) whilst their father is off fighting in the Civil War. In the flashbacks, we see the March sisters experience several episodes of growing up, including their numerous run-ins with Laurie (Timothée Chalamet), the rich young boy who lives across from their home, all of which shape the women that they eventually become.

Gerwig’s approach is simple, yet profound. By reorganising the structure of the original narrative, we get more of a sense that this is all one big story, rather than two parts of a story stitched together (which, when you look at how the book itself is structured, is actually true). This ensures that the most dramatic moments in the latter half have a far greater impact than they would if it had been told linearly, with the contrasting past and present scenes creating a powerful juxtaposition that really sucker-punches you right in the feels. It makes a very old and overly analysed story from over 150 years ago seem fresh and exciting once more, especially when Gerwig inserts numerous amounts of energy and wholesome goodwill into scenes which completely earn your sympathies. Her script, and the way she directs her actors, is funny, sad, wise and even meta – sometimes, all in the same scene – as she cleverly incorporates elements of Louisa May Alcott’s own life into the narrative as Alcott herself did in her writing, which neatly bookends the film with a genuinely sweet appreciation for the author whose work has lived for more than a century.

She is incredibly fortunate to have actors who are completely willing to dive head-first into her lively vision, all of whom are such wonderful fits for their characters. The leading quartet of Saoirse Ronan, Emma Watson, Florence Pugh and Eliza Scanlen are all uniformly excellent; they genuinely feel like sisters in the way that they trade back-and-forths with each other and also have petty, scathing arguments which are negated by their true love and devotion to each other. Being a performer herself, Gerwig clearly knows how to direct actors towards pitch-perfect performances, and because of that there is not one actor in the entire thing who puts a foot out of line, not one who doesn’t completely nail what Gerwig id aiming for with her vision. As for how these versions of the characters compare to how they were in the book, I cannot say (having not exactly read the book in question), but I do hear that this rendition does update the arcs of certain people, particularly Pugh’s Amy who is apparently made to be a lot more likeable than she is on the page; there are clearly still traces of brattiness on her part, but the way in which Gerwig lets her character actually evolve as the movie goes along makes those moments feel natural and even necessary.

Although the movie does feel a little too long at times – and towards the end, you can begin to feel its length – Gerwig does her best to fill that time with sweet moments shared between the actors and quieter moments where the visuals do all the talking, all of which make her an incredibly sophisticated storyteller to take seriously, even when it’s with a story that has been done so many times that not many people think there’s anything left to say with it. As it turns out, Gerwig is more than up for the task, and she has made a version of Little Women that towers above many of the other ones, based on its pure joyfulness and warm-hearted intentions that clearly capture what Alcott was aiming for in her book. It may be a story about little women, but its appeal knows no age or gender.

Little Women is a wondrous new version of the classic story, brought to vivid and joyful life by writer-director Greta Gerwig who plays around with the narrative structure and ends up making some of the more dramatic moments hit even harder, and by a group of brilliant actresses from Saoirse Ronan to Florence Pugh who bring an easy chemistry and sense of humanity to their sisterly characters which makes them, and the movie as a whole – despite an overlong running time – hard to resist.

Want to decide what the movie’s like for yourself?
Check out Little Women showtimes in London
via