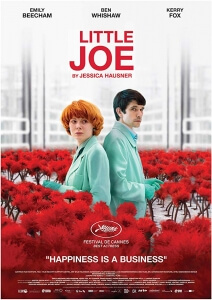 The premise of Little Joe, the English-language debut of Austrian filmmaker Jessica Hausner, suggests that it is a full-on horror film. After all, when you’re making a film about a plant which causes people to have their personalities radically altered, you have to amplify the creepiness that it is hinting at, which the movie at times does to chilling effect.

But to call it a horror film just wouldn’t be accurate. Though again it is not without its moments of creepiness, it is not especially scary, nor does it ever seem like it wants to be. It’s similar to how Peter Strickland framed his film In Fabric from earlier this year, which took the initial premise of a killer dress and just ran with it, combining Dario Argento-style visuals and an unapologetically absurd sense of humour which really carried itself; while Little Joe is perhaps a little more straight-laced than Strickland’s film, not quite embracing the bizarre nature of its plot and numerous consequences, it is a stylish, intriguing, and creepy enough little thriller that leaves you pondering its subtle themes more than truly chilled to the bone.

We begin as a group of scientists, among them single mother Alice (Emily Beecham) and mild-mannered Chris (Ben Whishaw) are developing a new species of plant which, if looked after properly, can make its owner feel happy. Against company policy, Alice takes one of the flowers home for her young son Joe (Kit Connor) to take care of, which ends up causing a chain reaction of strange events, particularly when both Chris and Joe are separately exposed to the flower’s pollen and, for lack of a better term, become a couple of sociopaths.

However, they do not become sociopaths in the sense that they start killing people or anything; they’re more just emotionless, oddly passive shells that seem to have an obsession with the plant’s longevity. Joe, in particular, starts behaving like an adult trapped in an 11-year-old’s body, making some strangely mature decisions that disturb Alice greatly, such as deciding he wants to live with his father out of the blue. Strangely enough, the movie is about growing up, and the parent’s struggle to accept their growing maturity, which the movie cleverly works into the lingering paranoia that the person you thought you knew just suddenly isn’t that person anymore. Even if he never became exposed to the unusual side effects of the plant, Alice would have probably still had to have dealt with the fact that her son is growing up eventually, in what is surely a common emotion for many parents with children about to fly the nest. Sure, it’s presented here as some sort of creepy reworking of Invasion of the Body Snatchers, but part of the intelligence within Hausner and co-writer Géraldine Bajard’s layered script is that it approaches these everyday themes in a way that is not only unique but also intriguing enough to make you want to see more.

Also keeping the movie above water was how gorgeous it looks. It is a movie that wears its stylistic influences on its sleeve, particularly Stanley Kubrick whose presence can be felt in every unorthodox camera angle, framing and the use of colour (even the film’s opening credits draw several parallels to the opening texts of Kubrick’s The Shining), but Hausner ensures that her own voice remains apparent as the strangeness of the plot continues to unfold. The actors, too, deliver some very understated performances, with Emily Beecham – who won the Best Actress prize at this year’s Cannes Film Festival for this film – delivering a turn which is quiet and unshowy, and all the more effective for it. Special mention should go to New Zealand actress Kerry Fox, who nails the exact tone and level of emotion the overall script is suggesting.

The movie is not getting the most glowing of reviews – it is currently at 66% on Rotten Tomatoes, which isn’t awful but not exactly great either – and I’ll be honest, I can understand why. Despite the script doing some clever things with some of its themes, the film cannot completely escape a rather dry approach which can easily put some people off, especially anyone going into this expecting a full-on horror movie. It’s much more in the vein of something like The Lobster, which also had a very weird sci-fi set-up and just kind of did its own thing with it, which on the one hand I kind of respect but then it also kind of feels like the opportunities that are being hinted at aren’t entirely explored as much as they probably should have. I have a feeling that when this does make its way to UK cinemas – in February, if you’re wondering – a lot of audiences will probably not be all that into it because it is this very dry, matter-of-fact oddball movie which definitely has ideas and themes, but doesn’t convey them in a way that’s especially audience friendly.

This will perhaps play better with the arthouse crowd, and it’s easy to see how they can appreciate the stylistic and thematic risks it is taking more than the average movie-goer. As for me, I thought it was decent enough; it’s well-made, well-acted, and certainly smart in how it approaches certain topics such as maturity and empty nest syndrome, though it won’t surprise me if, come February, it doesn’t exactly bloom with the majority of audiences.

Little Joe is an intriguing and chilling movie that has an acute sense of style, has some strong performances from the likes of Emily Beecham and Kerry Fox, and has moments of genius in its approach towards certain themes, but its dry execution and inability to explore all of the bizarre premise’s possibilities might make it a difficult film for the majority of audiences to warm up to.

Want to decide what the movie’s like for yourself?
Check out Little Joe showtimes in London
via