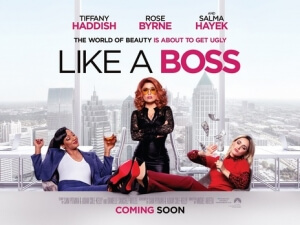 BASICALLY…: Two friends (Haddish and Byrne) find themselves competing against a cosmetics mogul (Hayek) when she tries to steal their business from them…

WYSIWYG, short for “what you see is what you get”, is one of the more famous acronyms, used in everything from computing to public slogans, and can now be used to describe Like A Boss, a movie that advertises itself as exactly the kind of flick you’re expecting, no more, no less.

Just from watching the trailer, you can quickly pick up on the kind of movie that it’s setting out to be, and it delivers practically everything that it promises (with the exception of one or two deleted scenes that are not in the final cut). Although there are no real surprises to it, nor is it destined to be remembered in the long run, the one thing I didn’t predict going into it was that it wasn’t as bad as I thought it would be; still not great, but a modicum above what I was expecting from it.

The film is about Mia (Tiffany Haddish) and Mel (Rose Byrne), two lifelong best friends who run their own independent make-up company together, along with co-workers Sydney (Jennifer Coolidge) and Barrett (Billy Porter). However, when they can no longer hide the fact that they are nearly half a million dollars in debt and facing the prospect of closing up shop, they are approached by cosmetics titan Claire Luna (Salma Hayek) who offers to buy them out in exchange for 51% ownership of their company. This begins to cause a rift between Mia and Mel, with the former not being too happy about their business being taken away from them and the latter not having enough confidence to stand up for herself, but when it becomes clear that Luna’s intentions are far from genuine they must work through their differences to take on the industry giant.

Again, and I cannot stress this enough, this movie is exactly what you think it is; a female-centric buddy comedy that goes through all the motions, is a little raunchy but not too much so, and has laughs that are totally hit and miss with a fair amount of hits and misses. Needless to say, originality is not its strongest suit, nor is its ability to leave you guessing, because the majority of the biggest plot points are heavily signposted and even spotlighted in the trailer – one of the film’s comedic highlights, a scene revolving around Billy Porter’s character, is shown nearly in full during it – which makes it a very predictable movie to watch. It’s also hard to escape the irony that this film about female friendship that predominantly features female actors and characters is directed, written and produced exclusively by men; yes, it’s not a great look during a time when people are clamouring for more opportunities for female filmmakers when it comes to films that spotlight these kinds of friendships, but honestly the film has bigger problems that that, like a script that doesn’t stray too far from path and doesn’t take many opportunities to say things that no other film like it has managed to say. Although, in a possible meta acknowledgement of the male intrusion in a female friendship story like this, there is a recurring plot thread about two straight men who also enter the cosmetics frame with their rather misogynistic line of make-up that sells itself from the perspective of the male gaze – although, I doubt that actually was the case, because the movie isn’t smart enough to realise something as profound as that.

All of that being said, despite the many things about it that don’t really work, I was never hating or even being that annoyed by it. Part of that is because the chemistry between Tiffany Haddish and Rose Byrne really was carrying a lot of the film for me; both are exceptionally gifted comedic actors, and they work off each other well enough for you to see a genuine connection between the two, like these people really have been friends for the majority of their lives. You are rooting for their friendship because not only are Haddish and Byrne selling it so effortlessly, even in scenes where the writing really isn’t doing either of them any favours, but it’s also handled with a noticeable bit of heart to it, which does make it feel a little more passionate than it probably is. On the flip side, there’s Salma Hayek having fun hamming it up as the cartoonish villain, playing it as this sort of Cruella de Vil figure if instead of skinning puppies she tested her cosmetics on them instead, and it’s fun seeing Billy Porter in just about anything as well. Basically, all of these actors are at least making the most of this rather light script, and their efforts actually get most of the work done to make it a tolerable, though again not especially wondrous, movie to sit through.

Going back to how this is very much a WYSIWYG movie, and that there are practically zero surprises to it other than what was given away by the trailers, it’s certainly true that the efforts of the actors feel wasted on material that just isn’t up to their level, but those efforts still make up the difference and are admirable enough to at least respect some of the love that went into a film that would have otherwise fallen right on its face. What you see is certainly what you get, but at least you’re getting something that isn’t completely intolerable.

Like A Boss does not set out to be any different than how it’s advertised, nor does it especially work in a lot of the script and humour department, but the chemistry between Tiffany Haddish and Rose Byrne is strong enough to carry everything and make it not as much of a slog as it could have been.

Want to decide what the movie’s like for yourself?
Check out Like A Boss showtimes in London
via