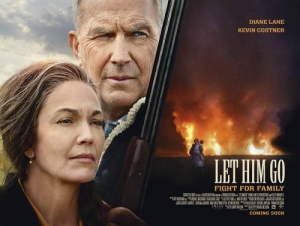 BASICALLY…: Retired sheriff George (Costner) and his wife Margaret (Lane) seek to rescue their daughter-in-law (Carter) and their grandson from the clutches of a sinister family…

The easiest joke one can make about Let Him Go’s casting of Diane Lane and Kevin Costner in the lead roles is that it’s a grim, quiet Man of Steel spin-off with Ma and Pa Kent, which shows what they’re up to while their son Clark is off in Metropolis saving the day. While it’s amusing to go into the movie with that mindset, writer-director Thomas Bezucha’s studious little thriller – based on the novel by Larry Watson – could not be further removed from the two actors’ roles in Zack Snyder’s Superman reboot (yet it somehow also has a significantly smaller body count than Man of Steel).

The film, set in Montana during the 1960s, sees Costner and Lane play George, a retired sheriff, and his wife Margaret respectively; when we first meet them, they’re happy enough, living with their grown son James (Ryan Bruce), his wife Lorna (Kayli Carter) and their infant grandson Jimmy, but tragedy strikes when James is suddenly killed after being thrown from a horse. Cut to three years later, when Lorna remarries to a man named Donnie Weboy (Will Brittain), but after Margaret one day witnesses Donnie physically assaulting both Lorna and little Jimmy, she attempts to intervene but finds out that they have suddenly relocated to the Dakotas, where Donnie’s equally sinister family lives. After convincing George that they need to travel there and remove their grandson from the dangerous household, the couple soon encounters the terrifying Weboy matriarch Blanche (Lesley Manville) who is not willing to give up her step-grandson nor her step-daughter without an intense fight.

The film is half-and-half a seedy revenge thriller, with over-the-top shady characters who give you the creeps just by their facial expressions, and also a slow-burn drama about the pain of not being able to save the people you love. It would have worked just fine as either one of those, but meshed together the results are often tonally uneven. Scenes go by where not much is happening – an entire minute of the film is dedicated to Costner stopping by a store to purchase some alcohol – but then, all of a sudden, we’re introduced to Jeffrey Donovan as the kind of sneering misogynist you’d find in a Death Wish movie. It’s as though one completely different movie has derailed and crashed into an entirely separate one that’s already in progress, and often you can’t help but think about how they feel so out of place next to each other. Again, it’s not that one element works and the other one doesn’t – in fact, there’s merits to both of them individually – but together, it doesn’t seem as though there’s enough solid writing to combine the two as seamlessly as it perhaps prefers.

Where it works best, though, is when you pick the two competing tones apart and inspect them on their own, and find that you get two separate halves of a whole movie that somehow don’t entirely work as one. As a revenge thriller, there are some genuinely intimidating performances – Lesley Manville, in particular, is having a lot of fun hamming up her psychotic matriarch – and intense sequences where you’re left squirming from some of their shocking brutality (especially when an axe comes into the picture). Meanwhile, there’s a bit of pleasantness to be found in its slower, quieter drama half, as both Diane Lane and Kevin Costner give turns of varying range that always underline the emotional core of their arcs, and they share some tender scenes together that give their journey some meaningful depth; at one point, the two befriend a teenage Native American who’s living alone in the Dakota landscapes, and their conversations with the disenfranchised young man offer some eye-opening, even disturbing, insights into the treatment of the Natives by modern-day Americans. It’s also a well-made movie, with some pretty cinematography by Guy Godfree that captures the vast, desolate American countryside in all its silent glory, and as a director Bezucha certainly seems to know how to give a scene the right amount of tension when he wants to.

However, while it’s certainly an ambitious movie in terms of combining two very different tones in a plot that has every right to call for both of them, there’s something about it that just doesn’t seem to work that well. If the script had perhaps leaned harder into one tone over the other, instead of trying to go halves on both, then maybe it would have felt like a more consistent movie. It probably needed to exclusively be either a revenge thriller or a slow-burn drama, but not both at the same time; that way, it can go all out and be exactly what it wants to be, without hesitating about the other kind of movie it’s also trying to make. By trying to be both kinds of movies simultaneously, it leaves the film somewhat muddled, which is a shame because the ingredients for a legitimately great film are there – strong performances, compelling characters, unsettling moments of violence, and so on – but they don’t exactly come together all that well to make something wholly satisfying.

Does this mean Let Him Go is a bad movie? No, not by a long shot; but it does leave quite a bit to be desired, especially in its indecisiveness about what kind of film it wants to be, which ends up making it far more uneven than it ever needed to be.

Let Him Go is an ambitious but ultimately uneven attempt to be both an intense revenge thriller and a compelling slow-burn drama, for while there’s merits to both these elements individually, from the strong performances to some intense violence, they feel tonally muddled when placed together, and aren’t as satisfying as they probably should have been.

Let Him Go is out now in cinemas across the UK.