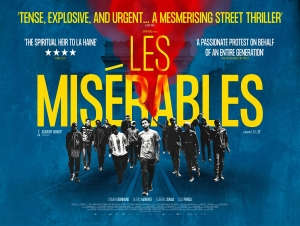 BASICALLY…: A Parisian cop (Bonnard) discovers an oppressed underworld of working-class groups when he joins the city’s anti-crime brigade…

“Do you hear the people sing…” Wait, no, that’s a VERY different Les Misérables. Although, having said that, director Ladj Ly’s film of the same name actually shares a bit more in common with Victor Hugo’s classic novel (and by extension, the popular musical based on it) than you might think: not only is it primarily set in the same Parisian area where the author wrote his most famous book, but it shares strikingly similar themes of class oppression, enforced law and order, and disenchantment of the younger generation.

It just goes to show that, despite the parallels between Hugo’s book and Ly’s film ending there, some themes are pretty much timeless, and this movie does a very good job at adapting them for a much more modern setting that speaks to both their universality and their urgency, especially in today’s troubling times.

The film follows a small group of characters in the Parisian suburbs of Montfermeil, mostly during a single day. One of them is Stéphane (Damien Bonnard) who’s just recently moved to Paris to join the local anti-crime brigade, and is paired for the day with two fellow officers, Chris (Alexis Manenti) and Gwada (Djebril Zonga). During the day, Stéphane witnesses his two superiors frequently abuse their powers and act aggressively towards the predominantly black community they’ve been sworn to protect; a community which is already at the tipping point of tension, given the uneasy relations between the black civilians and the authorities, between the growing Muslim Brotherhood and the suburb’s peace-making “Mayor” (Steve Tientcheu), and between everyone and a group of racist gypsies. The latter are angry because a young troublemaker named Issa (Issa Perica) has only gone and stolen their lion cub, which sends the officers on a mission to retrieve and apprehend the culprit, which – to put it bluntly – does not end up going well for anyone.

Ly’s film takes bold steps to avoid any easy comparisons to films like Training Day or the more recent Black and Blue, in regards to its harsh look at police abuses of power against a hard-lined community, by placing a firm focus on how this entire area appears to have been failed by a much grander problem of both classism and racism. These suburban areas are largely populated by glooming tower blocks and makeshift homes on the street (a young main character, effectively homeless, parks himself on a ruined sofa as though it were his own domain), where fear and anger form a daily pattern for civilians who are already on the verge of acting out against the system. Ly additionally doesn’t sugar-coat any of the brutalities that the main police officers, especially the aggressively corrupt Chris, inflict upon largely innocent people; an early scene sees him threaten a teenage girl with an anal probing when she’s caught smoking, and later roughs around a group of kids who run away from the authorities. It’s especially uncomfortable to watch now, given the current situation with American law enforcement and the systemic racism that’s been further exposed by it, as it should be; Ly is a savvy enough filmmaker to make it feel so real, and devastatingly apt for our increasingly volatile times.

When something extremely serious happens about halfway in, following a showdown between the cops and some young kids opposing their brutal arrest of another person, the film becomes an even greater cesspool of uneasy tension, which is where Ly gets to also show his ability to build natural thrills without forcing them onto the plot. You are left not knowing which side to root for, because nearly every single person involved here has their own perfectly good reasons for doing what they do, but also nefarious ones which only further their own self-interest; it ultimately boils down to which one is the lesser of two evils, but even then the situation is not that black-and-white. Strong debates about the much larger problems of class and prejudice are sparked from the most unlikely of places, including an Islamic sandwich shop owner who questions the methods that all parties are using to disrupt the peace for their own selfish reasons, but at the same time there are no clear heroes or villains on either side, which Ly rather cleverly leaves to the audience to decide who is right and who is wrong.

Things take a (literal) explosive turn in the film’s thrilling final act, where just about every major plot strand comes together for an episode of retribution that is chaotically staged (in a good way) and fills you with such dread and anguish because, again, you don’t know who’s getting their deserved comeuppance or their much-needed liberation. The film ends on a perfect moment which further hones in on that point, leaving certain things intentionally vague but making the message all the louder about the broken system that has caused all of this chaos. It’s a devastating, but entirely impressive piece of filmmaking, with strong performances by a cast of mostly unknowns, and a smart script that makes a profound commentary on growing societal norms that speak to anyone in similar situations not just in France but around the world.

Even better, there’s no crooning Russell Crowe to be seen anywhere, which is always a plus.

Les Misérables is a vibrant and timely account of class oppression, police brutality and social disenchantment, all contained in a tightly organised package by filmmaker Ladj Ly who doesn’t sugar-coat the harshness and uncomfortable prejudice of authorities, nor does he condone the violent actions of the suppressed civilians, wisely leaving the real heroes and villains of the picture in the mind of its audience instead.

Want to decide what the movie’s like for yourself?
Check out Les Misérables showtimes in London
via