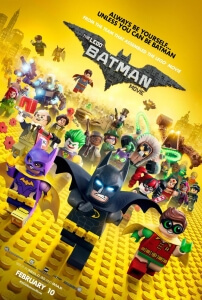 BASICALLY…: In the LEGO universe, Batman (Arnett) must learn to work as part of a team if he’s to take down The Joker’s (Galifianakis) latest scheme…

How did they do it? How in God’s name did Warner Bros make not one but two films about LEGO figurines that aren’t just brilliant comedies, but also great movies on their own? By definition, it should not be possible – I remember when plans for a movie based on the ongoing LEGO brand were announced, and almost everyone scoffed about how it could possibly work without it being just one massive advert. Of course, when directors Phil Lord and Chris Miller debuted The LEGO Movie to overwhelmingly positive reviews and even more overwhelmingly strong outcries when it was robbed of an Oscar nomination for Best Animated Film, all scepticism had evaporated, and suddenly people couldn’t wait for the next LEGO movie to come out, especially when it was announced that the very next one would focus on one of that film’s standout characters, who also happened to be one of Warner Bros’ most profitable franchises.

Batman, or at least the version presented to us in The LEGO Movie, was a comically dark, brooding and wildly self-absorbed billionaire superhero, and with Will Arnett also providing the voice he was instantly pure comedy gold. So, it makes more than a little bit of sense to give him his own movie, because the Batman mythos in and of itself is ripe for satire, and like the very best of them it comes from a place of pure adoration for the character and the many characters associated with him over the years.

You feel the love for the Batman lore almost straight away, with an opening sequence that features pretty much every villain that the Caped Crusader has come across – from the Joker (Zach Galifianakis) to more obscure ones like The Condiment King – all being swiftly defeated by the winged LEGO figurine himself (Arnett), and references all throughout to past incarnations of the superhero in film, television and even the old serials from the 1940s. Even the plot, which sees Batman (once again voiced by Arnett) putting aside his “I work alone” mentality to work with others like his newly adopted son Dick Grayson aka Robin (an adorably chirpy Michael Cera), the new Gotham City Commissioner Barbara Gordon (Rosario Dawson), and his stern but loving butler Alfred aka, erm, Alfred (Ralph Fiennes), homages everything that makes the character memorable but also kind of a bummer next to some of the other superheroes out there. The film is both a harsh roast of the character as well as a loving tribute, and central to that is how the writers – among them Pride and Prejudice and Zombies author Seth Grahame-Smith – take time to analyse every bit of his flaws, such as his constant inability to put away the numerous villains for good, and lovingly mock them through funny gags or humorous throwaway lines. Fans of the character will absolutely adore this movie, because it takes what Batman essentially is, and uses it to make a satire that’s biting as well as absolutely hilarious.

Like The LEGO Movie, this movie hurtles along at a chaotic speed, with jokes being flung at you from left, right, up above, down below, and every other direction possible, all of them landing at least a light chuckle and at best full-blown laughter. Director Chris McKay – a regular director on cult stop-motion series Robot Chicken and served as animation co-director on the previous film – has most definitely made the funniest Batman movie ever, and somehow feels less of a cartoon than Batman and Robin did, because it deals with joke after joke with the right kind of timing and delivery that almost never falls flat, and even in some of its tender moments earns a few sympathy points towards our main hero, his monstrous egotism aside. It also maintains the same type of childlike wonder that the previous movie did, but this one feels much more like a child playing with his toys than last time, right down to sound effects like gun blasts and button-pressing being vocalised, like a child actually pretending to fire a gun or press some fancy buttons. It’s a child’s fantasy version of Batman, and it speaks to children of all ages, with the bright and colourful animation pleasing the youngest of kids, and the wild kinetic energy of the comedy being especially appealing to older members of the audience.

While it is consistently hilarious and lovingly ribs one of the most popular superheroes of all time, it can feel a little too energised sometimes, making it just a little too hard to keep up with the jokes as they are constantly thrown at us from all angles. But really, when the biggest flaw with the movie is that it’s too funny and too energised, that’s still leaps and bounds better than the actual DC films we’ve gotten so far. On that note, watching The LEGO Batman Movie and realising that it’s probably the most fun that DC has ever had with a movie, makes it a little harder to appreciate what the likes of Batman v Superman: Dawn of Justice, Suicide Squad et al have been trying to do but mostly failing spectacularly. What they really need to learn, from a collection of bricks no less, is that to make a superhero film entertaining you don’t need to be dark and brooding and serious; you just need to have as much fun as you can, with these characters who have given people such joy from their adventures over the years, and making a story that has heart to it as well as a sense of humour.

You see, Zack Snyder? You CAN make a fun DC superhero film – a lesson that shouldn’t be learned from a LEGO figurine.

The LEGO Batman Movie is a constantly hilarious, highly entertaining send-up of the classic superhero which mixes energised and kinetic humour with a heartfelt tribute to the Caped Crusader that, despite its obvious focus on a younger crowd, honestly feels more adult and mature than the actual DC movies we’ve been getting so far.