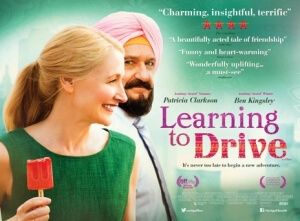 BASICALLY…: Following her divorce, writer Wendy (Clarkson) decides to get driving lessons from Indian Sikh instructor Darwan (Kingsley), who is himself dealing with an arranged marriage…

We all have those fears and anxieties when we first sit behind the wheel of a learner car, worrying what might happen if we crash into something or stall in the middle of a busy road when the traffic lights are green, but with enough practice and confidence we can eventually get better at it and soon pass our tests in no time. You’ve probably gone through that, we’ve definitely gone through it, and now Patricia Clarkson is going through that with the help of a turban-wearing Ben Kingsley in a new film about middle-class strife known appropriately as Learning to Drive.

Director Isabel Coixet, who previously worked with Clarkson and Kingsley in her 2008 film Elegy, tells the story from a script by Sarah Kernochan – itself based on a New Yorker article by Katha Pollitt – of Wendy (Clarkson), a book critic who has learned that her husband of twenty-one years Ted (Jake Weber) intends on leaving her for another woman. Faced with a newfound sense of independence, she decides to get driving lessons so she can go to visit her daughter (Grace Gummer) out in the country. Her instructor is Darwan (Kingsley), an Indian Sikh who himself is facing problems such as an arranged marriage to a woman he barely knows named Jasleen (Sarita Choudhury), as well as harassment from bigoted New York citizens, sometimes including cops.

Both Wendy and Darwan, of course, learn from each other about the little things in life and what it takes to live in a world where nothing goes exactly the way you’d like it to go. That is what’s really at the core centre of this film, which as gentle and non-challenging as it can be is still warm-hearted and well-intentioned enough to leave at the very least a mild impression on someone, even if just for a short while after seeing it. There are several moments in the film that threaten to go a more Hollywood route just to add a little more drama to the proceedings, and one or two times it can even step over that line, but for the most part Coixet opts to make the kind of crowd-pleaser that keeps its feet firmly on the ground and presents a more sympathetic pair of goals for its two protagonists to achieve by film’s end. Wendy’s struggle, for instance, is in coping with a life of being alone after two decades of marriage, eventually deciding to move on and start life anew, beginning with the driving lessons. Darwan’s struggle is interestingly going a different direction; he is going into a marriage rather than coming out of one, and must learn how to compromise his way of life to please his arranged bride, who herself must try to make the most of her new home in a country where she can barely speak English. Both come together to compliment the overall arc of dealing with the situation that’s presented in front of them, which sometimes doesn’t mean making it work the way you want.

Both Clarkson and Kingsley are a fine on-screen pair, but individually they are perhaps stronger. It’s easy to understand why some people would object to Kingsley’s casting as an Indian Sikh, despite Kingsley himself being of Indian descent and even winning an Oscar for playing Mahatma Gandhi, but the actor makes his character a gentle and lovable soul without ever venturing into caricature or stereotype, being the kind of teacher you wish you had while taking your own driving lessons. Clarkson, too, does great work here as someone coping with their life changing at the drop of a hat, and adjusting herself to work around it as best as she can, keeping in tone with Kernochan’s writing style of strong-willed female characters who are first and foremost people, as they should be. Oddly enough, when they are together, their chemistry is very muted and more like a typical teacher-student relationship than anything, but luckily we’ve seen by that point what they’re like individually and we are certainly on board with both of them mainly because of that.

If you are looking for something a little more challenging and with a little more meat on its bones, then chances are you might not get as invested in this, because it is so light-hearted and harmless in its content, but Learning to Drive is primarily a film for anyone who wants to leave the auditorium with the faintest smile on their faces.

Aside from a few points, it passes.

Learning to Drive is a gentle and non-challenging but utterly well-meaning drama about two people from different backgrounds making the most out of their circumstances, with Patricia Clarkson and Ben Kingsley shining brightly more individually than they do when on-screen together.