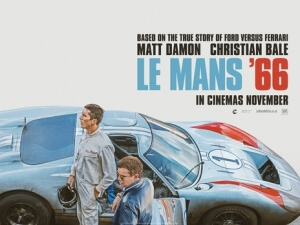 This review is of the cut shown at the BFI London Film Festival in October 2019 – the UK release date is currently listed for November 15th 2019.

There is something neatly old-fashioned about James Mangold’s newest film. The director, previously behind critical hits such as Logan, Walk the Line and 3:10 to Yuma, is someone who clearly takes inspiration from the Hollywood epics of the 60s and early 70s, but instead of channelling that energy into something with a massive scope, he instead brings it to a story about two competing motoring giants. Sure, that doesn’t suggest an epic quality as such, but with Le Mans ’66 (retitled Ford v Ferrari in the States) Mangold makes it feel as exciting and grand as the works of David Lean and even Cecil B. DeMille, and it’s a pretty good time as a direct result.

Set – when else? – in 1966, the head honchos at Ford are eager to stick it to their main competitor Ferrari after a purchase deal goes south, by building a race car that’s powerful enough to beat the Italian company at the upcoming 24 Hours of Le Mans race. They approach automotive designer and former racer Carroll Shelby (Matt Damon), who in turn recruits hot-tempered British driver Ken Miles (Christian Bale), to lead Ford’s team of engineers to ultimately produce a vehicle worthy of beating Ferrari on the race track.

Do they succeed? Well, if you know your racing history, then you probably already know the answer. But those who don’t will not necessarily feel lost in the midst of all the motoring jargon, because Mangold has made a film that’s crowd-pleasing enough for anyone to firmly enjoy, and easy to understand without it feeling like it’s talking down to anyone. Beyond the scenes of people testing vehicles, discussing the best size of engine to go with et cetera, there’s some solid human drama to uncover here, as well as some fun characters to get behind with every step forward it takes. You get to see the home lives of some of these people, how they connect with others, and what truly drives them when it comes to their passion for racing; between the two main leads, you definitely get a lot more of that from Bale’s character than Damon’s – there are several scenes that are just Ken Miles spending some quality time with his wife (Caitriona Balfe) and son (Noah Jupe) – but both deliver some great performances that dig deep enough into their characters’ humanity that you completely understand where both of them are coming from.

The film really comes alive, though, whenever people take their cars out for a spin. The racing scenes in this movie are electrifying, full of adrenaline and heart-pumping excitement which keeps the audience always on the edge of their seat, emotions that are brought about by luscious sound effects that plant you right there alongside these revving engines. In these sequences, the editing, writing, cinematography, performances et al are pushed into top gear, cruising the film towards a steady and enthralling finish. It’s almost like watching the chariot race scene from Ben-Hur, if instead of horses and carriages it was the sheer engine power of Ford and Ferrari motors alike.

Whilst we’re on the subject of old-school Hollywood epics, Mangold takes the sublime way in which he executes these scenes, as well as some of the quieter moments, and blows them up into something that truly feels grand and, indeed, epic. There’s something in the way he incorporates sound design, Phedon Papamichael’s cinematography, editing tricks and even some of the exaggerated performances, that makes the whole thing feel like something that would have starred Steve McQueen back in the day, and possibly even made by someone like David Lean who made the canvas look far bigger and more grandiose than it probably was. Mangold replicates those feelings of big old-school Hollywood here, and it’s not even the biggest of stories when you break it down – it all revolves around a spat between two warring car companies – but he makes it feel as though the world’s at stake because everything feels so much larger than life from a visual standpoint. He even has the film come out to a hefty two-and-a-half hour runtime, which towards the end starts to feel like too much, but for the majority of it up until that point it’s filled with entertaining performances, a story you’re interested in seeing all the way through, and even some unexpectedly funny moments which also touch upon that these people are, in fact, true human beings.

It’s a fine piece of modern filmmaking which doesn’t come around often enough in today’s effects-heavy market; here we have a film whose main source of fuel is grand practical visuals, a compelling story, fun characters, and a massive scope to it without even being all that huge in the first place, which could have so easily been told in such a hollow and unambitious manner had it not had as much drive behind it. It’s a must-see for motoring fans of all types, and also for those who can’t tell their Grand Prixs between their Le Manses, because this is one Hollywood epic that anyone can easily get behind the wheel of.

Le Mans ’66 has the look and feel of an old-school Hollywood epic, which director James Mangold replicates through a compelling story, strong technical achievements, fun performances and characters, and a real driving passion for the subject.

Want to decide what the movie’s like for yourself?
Check out Le Mans ’66 showtimes in London
via