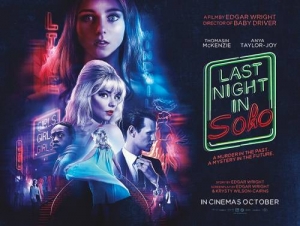 BASICALLY…: A young fashion student (McKenzie) finds herself able to visit the 1960s, where she learns the grisly fate of an aspiring singer (Taylor-Joy)…

This review of Last Night in Soho was conducted as part of the BFI London Film Festival 2021.

From Shaun of the Dead onwards, there’s always been a strong tinge of comedy in Edgar Wright’s work, which has greatly defined his stylistic personality across multiple genres from action to sci-fi to the music documentary. However, for his latest film Last Night in Soho, the comedy is noticeably more toned down (but don’t worry: his sense of humour is still very much present) and filled in by a newer, much darker side to the filmmaker that not even some of his grimmer comedies have yet explored.

As Wright’s first true foray into the horror genre, Last Night in Soho is as entertaining to watch as anything in the director’s line-up, especially in its overall look and technical achievements – however, from a purely narrative standpoint, it’s unlikely to rank high amongst his best work.

It also marks the first time that Wright has written, along with Oscar-nominated 1917 co-writer Krysty Wilson-Cairns, a female protagonist: two, in fact. First, there’s Eloise (Thomasin McKenzie), a wannabe fashion designer who is obsessed with the 1960s and is ecstatic to travel from Cornwall to London to attend a prestigious fashion school. She also happens to possess a sixth sense that allows her to see ghostly figures like her dead mother, and also enables her to travel back to the 1960s in her sleep. This is where we meet our second female protagonist Sandy (Anya Taylor-Joy), an ambitious singer who becomes involved with a charismatic man named Jack (Matt Smith) that promises her the career she’s always dreamed of. However, as Eloise continues to glimpse further into the past, she starts to uncover a very disturbing truth behind Sandy’s fate, which causes her to experience haunting visions that threaten to consume her as well.

The filmmaking alone is some of the most vibrant work that Wright and his team have yet accomplished. The cinematography, by Park Chan-Wook’s regular DP Chung Chung-hoon, is breath-taking to watch, drenched in the neon colours of the Soho district but with an added dream-like flair which adds to the surrealist atmosphere in both the dream world and the real one. It’s very reminiscent of Dario Argento in how it uses colour and lighting, while some seamless editing cleverly ties together imagery that mixes past and present pretty darn well. Other aspects like the costumes, sets and especially the soundtrack choices all feed into a real passion for the 1960s; Wright invokes strong nostalgia for seeing things like a marquee for Thunderball, fashion which to this day appears full of life, and hearing the likes of Cilla Black and Petula Clark play endlessly on old vinyl records (or even in person), from the perspective of someone who clearly adores this era as much as protagonist Eloise does, and has done a fine job of recreating the look and feel of a prosperous time in London history.

The excitement doesn’t last too long, though, as the movie quickly shifts gears towards an intense nightmare that seriously does not let up. The pacing for Last Night in Soho is energetic to say the least, rarely stopping for a quiet moment as it bombards the viewer with non-stop sinister imagery and overwhelming sound design which can be deafening at times (then again, that may be because the venue I saw this movie in had acoustics that are clearly not used to providing surround-sound quality). It threatens to be too much to take in at times, so much so that you start to miss out on certain key moments in the story because you’re too distracted by all the noise and fancy camerawork, but it always remains consistently entertaining to watch because you are watching some likeable performances (Thomasin McKenzie is adorable as always, while Anya Taylor-Joy exhumes charisma, and don’t you dare miss Dame Diana Rigg’s final posthumous performance) and you are invested enough in the plot to be curious as to where the movie is eventually leading to.

Where it does end up in that third act has already divided opinion amongst critics, and honestly it isn’t hard to see why. While both Edgar Wright and Krysty Wilson-Cairns have proven themselves to be excellent writers in the past, they steer this story towards a point which – without giving anything away – might seem a bit contrary to the themes it’s been focusing on. A lot of the movie has to deal with the predatory male gaze upon vulnerable young women, which both Eloise and Sandy, two wide-eyed innocents who have both come to London seeking ambitious careers for themselves, are unfortunately subject to by almost every other man who instantly sexualises them; a noble theme for the writers to tackle, and it does so a lot more effectively than other horror movies made in the post-#MeToo climate, but the climax of the movie goes places which sully the message a little bit, for the sake of a fiery conclusion where we’re not too sure who’s in the right or wrong. It’ll be interesting when the movie does start showing to public audiences so that their opinions can be counted as well, but it might not be too dissimilar to what those who have seen it think of the slightly clumsy third act.

Though it’s far from his best work, Last Night in Soho is ferocious entertainment from Edgar Wright, who still manages to make even the most unbalanced material work from a stylistic point of view. He’s a filmmaker who goes into pretty much any genre with a fiery passion and delivers something that is both a love letter to it as well as a fine example in its own right, which Last Night in Soho very much is for the horror genre and the 1960s aesthetic which has never looked or felt more terrifying in the 21st century.

Last Night in Soho is an entertaining foray into horror for director Edgar Wright, which boasts some stunning technical work that lovingly recreates the 1960s London aesthetic, but a relentless sensory experience and an unbalanced third act prevent it from being among the filmmaker’s finest work.

Last Night in Soho will be released in cinemas nationwide on Friday 29th October 2021 (as of publication).