Last Moment of Clarity (Review) – A Ridiculous Attempt To Do Hitchcock 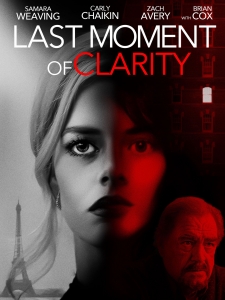 BASICALLY…: A man (Avery) finds a striking resemblance between a famous actress (Weaving) and his fiancé who, three years earlier, was seemingly killed by the mob…

Since Alfred Hitchcock passed away, so few filmmakers have managed to truly capture what it is to be a “Hitchcockian thriller”. Most of the time, they’re either cliché-ridden mystery thrillers where the twists keep piling on top of one another, even if many of them really make no sense whatsoever, or stylistic carbon-copies that are merely pale imitations of classics like Vertigo or Psycho (in the latter’s case, Gus Van Sant’s much-slated shot-for-shot remake was literally exactly that).

Somehow, Last Moment of Clarity manages to be both at the same time, from its increasingly ridiculous plotting to the overall sense that the filmmakers – including director brothers Colin and James Krisel – wanted nothing more than their movie to be associated with the phrase “Hitchcockian thriller”, without any of its own identity or logic to carry itself.

The film first introduces us to Sam (Zach Avery), a man who is hiding out in Paris after mobsters killed his aspiring actress girlfriend Georgia (Samara Weaving) three years earlier, after he accidentally witnessed crime boss Ivan (Udo Kier) committing a murder from their apartment. One day, whilst watching a movie at the cinema, he notices that one of the actors bears a striking physical resemblance to his slain love, now apparently going by the name Lauren Creek, and obsessed with getting answers, he flies out to Los Angeles in order to try and get close to the actress, to see if it truly is his beloved Georgia. He’s assisted along the way by impulsive old school friend Kat (Carly Chaikin), who just so happens to be connected to some of the big Hollywood players in one of many instances of convenient plotting, and also targeted by some vengeful gangsters who spot him in the crowd. Brian Cox is also somewhere in there as a friendly mentor to Sam when he’s living in Paris, but he honestly plays very little part in the actual plot, so it’s really not worth getting into that much.

The weight of the initial mystery seems to be circulating around whether or not Sam is genuine about his pursuit of this actress who happens to look like his dead girlfriend, or if he’s just some crazed stalker who has simply become obsessed with this woman. Before the film makes it abundantly clear as to what the answer to that question is, the film is genuinely hard to watch, because regardless of whether or not he’s right about her, this character constantly displays creepy behavioural patterns from standing at a distance with a thousand-yard stare, to cutting out several pictures of this actress and collectively placing them on a wall, to an unkempt and unshaven look that is extremely off-putting. Again, even if he is in the right, how he acts for a large majority of this movie is so unsettling that it feels entirely wrong that the movie keeps condoning and even rewarding this character for his extremely questionable actions, and you’re constantly thinking of all the better ways he could have approached a number of things without being such a creep about it.

It’d be one thing if you actually cared about his past relationship with Georgia, but it’s near impossible to do that because the film barely shows any moments of them as a couple, outside of what I can only assume is a romance that took place entirely in a small bathtub where they talked about nothing except how much they loved each other. There’s no indication that these characters displayed any kind of chemistry beyond those eye-rolling scenes, and thus there’s no reason to get invested in whether they get back together or not (if, of course, Georgia really is this apparently famous actress, which begs the question: if she wanted to change her entire look and identity, why on earth would she still pursue a Hollywood career that would put her in an international spotlight?)

The twists in this movie come thick and fast, often telegraphed with all the subtlety of a charging rhinoceros, and yet the level of conflict is surprisingly scarce, given how easy it can be to eliminate some of the more villainous figures in this story; and without giving away the ending (because while I really didn’t care that much for this film, I still have a job to do here) it also ends in a way where you’re questioning what exactly was the point of the whole story.

None of this plotting or character development comes anywhere close to the phrase “Hitchcockian thriller”, because it lacks reasonable logic, compelling thrills, and even its own distinguished identity to work as either a Hitchcock call-back, or as its own thriller.

Last Moment of Clarity is a wannabe Hitchcockian thriller which fails to be genuinely compelling or in any way smart, thanks to a nonsensical script with questionable twists and characters that ultimately serve no purpose.

Last Moment of Clarity is out now to rent or buy on digital platforms, including Amazon Prime Video.