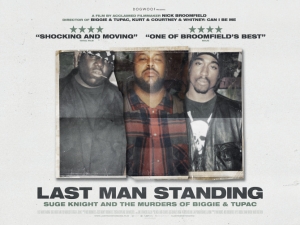 When discussing the brutal murders of rappers Tupac Shakur and Biggie Smalls, it’s virtually impossible for Marion “Suge” Knight to not enter the conversation. Ever since it became public knowledge that the disgraced Death Row Records executive was most likely the main instigator of their assassinations, Knight has become almost like a Bogeyman-type figure that is remembered for his ruthlessness and often psychotic behaviour which, of course, would lead to two of history’s most beloved hip-hop artists being brutally gunned down.

That’s partially because, in 2002, documentary filmmaker Nick Broomfield’s film Biggie & Tupac became a minor cultural milestone that investigated the theories surrounding their unsolved murders, and gave enough evidence to implicate Knight – who by that point was already deep in legal woes – as playing a major part in their deaths. It remains a tricky conversation even twenty years later, as Broomfield returns to the subject matter for his follow-up film Last Man Standing, but here the filmmaker gives a solid enough update on how far down this rabbit hole he has gone to discover more of the truth, even if some of the new evidence isn’t the be-all and end-all that some might be hoping for.

In his film, Broomfield interviews several people who were close to Suge Knight, Tupac Shakur and Biggie Smalls around the time their fates would intertwine; they include people who worked for Death Row Records as mere photographers or security, close family and friends, and even one of the film’s producers Pam Brooks who serves as a resourceful gatherer of contacts and willing interviewees. Many of them recollect Knight’s ferocious handling of business at Death Row, including the employment of local gang members to act as security detail and other significant roles, and how the slain rappers – especially Tupac – became so caught up underneath his influence that they would start exhibiting similar gangster behaviour, even if it was just to please Knight when he was around. The film also investigates claims that Knight was assisted in the murders by a small group of corrupt LAPD officers, which was at one point investigated by former detective Russell Poole (who was interviewed by Broomfield for his 2002 documentary, and has since passed away), only for him to be discredited by the force in response to his efforts.

If you’ve seen Biggie & Tupac, chances are that you won’t exactly find much that’s new in Last Man Standing; it covers a lot of familiar ground that the prior film did, albeit with a larger focus on Knight and his wavering influence on both rappers, and most of the stuff that Broomfield uncovers regarding his role in their murders is certainly shocking, but not that surprising. However, there are areas he is able to touch upon which makes this particular case seem all the more relevant in 2021, especially with the police being allegedly involved. Even with the recent conviction of former officer Derek Chauvin for the murder of George Floyd, police brutality and racism remains an incredibly sensitive topic when discussing American law enforcement. With that in mind, this film’s revelations about cops possibly carrying out Biggie’s assassination – under Knight’s orders, seeing how they may have been on his payroll – raise a lot of questions about how much power the disgraced music executive actually wielded, because it suggests that police corruption was so rampant back then that their morals could easily be bought out by a music executive who fancied himself as the West Coast Don Corleone. Last Man Standing wastes no time admitting how such feelings still exist today amongst civilians, to a point where an interviewee expresses reluctance about talking to Broomfield because they think he might be an undercover cop (despite his distinctive British accent).

The film covers a fair deal of the main figures’ lives, with a lot of time dedicated to Tupac Shakur and his rise to prominence within Death Row Records (by contrast, Biggie’s life barely gets a look-in). They certainly help give a bit more context as to how they all ended up becoming so connected with each other – in Tupac’s case, he viewed Suge Knight like some sort of fatherly figure, the kind that would occasionally bring him drugs and women to have fun with – but ultimately, while Broomfield’s expertise on the subject is notable, the film tends to come up short on anything truly revelatory. Most of it is stuff you’ve either heard before, or is just told in a slightly different way; whatever your thoughts may be on Suge Knight and his possible connection to the murders of Biggie and Tupac, your opinion is unlikely to be swayed by this impressively crafted but somewhat light documentary exposé.

Last Man Standing is a decent enough follow-up to filmmaker Nick Broomfield’s 2002 documentary Biggie & Tupac, as it expands on some new evidence linking disgraced music executive Suge Knight to the rappers’ murders, but most of the revelations are variations of things that are more than public knowledge by this point, and despite the occasional connections made to current affairs, it’s also a somewhat light look into a pair of long-standing mysteries.

Last Man Standing will be released in UK cinemas on Friday 2nd July 2021 – click here to find a screening near you!