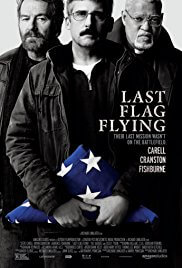 BASICALLY…: Three veterans reunite when one of their sons is killed in action, and decide to embark on a trip together to bury the body…

This review is of the cut shown at the BFI London Film Festival in October 2017 – as of this review, there is currently no UK release date set for this film.

There’s something about the way that Richard Linklater directs conversation that really make them feel special and lovable, even when they’re talking about the most mundane of things. He made an entire trilogy out of just two people wandering around talking to each other, and even filmed a single project over 12 years that was mostly made up of just people shooting the shit with each other; if there’s anyone who can make an actual conversation between characters feel so real and poignant, it’s this guy, and he does it once again with his latest film Last Flag Flying, a film with an enormous heart to balance out its poignancy, and a lot of that comes from its three central characters.

The film opens in late 2003, with Larry “Doc” Shepherd (Steve Carell) walking into a lowly bar which is owned by Sal (Bryan Cranston), who Doc served with in Vietnam as a younger man all those years ago and hasn’t seen since. They both soon reunite with their other combat buddy Mueller (Laurence Fishburne), who is now a heavily religious preacher, and Doc lets them know why he’s sought them out: it turns out that his son was recently killed in action in Baghdad, and is seeking some company when visiting the flag-covered caskets at the army airbase. Once there, Doc decides that he wants his son to be buried back home instead of in a normal military cemetery, and enlists his friends to help him transport the casket across the country, re-bonding with them in the process.

Interestingly, the film is actually a very loose sequel to the 1973 film The Last Detail which starred Jack Nicholson and Randy Quaid in Oscar-nominated performances, as originally intended by author Darryl Ponicsan, who co-writes the adaptation with Linklater. Here, the names have been altered, as have certain plot elements, so a viewing of The Last Detail is not at all required since this works perfectly well as a standalone, and you can pick up on who these characters are and who they were back in the day just from the dialogue and the acting. Linklater, however, doesn’t shy away from some of the core themes from that movie, such as how much military life kind of sucks if you’re on the receiving end on your own side; we learn that Doc’s son didn’t exactly die in the most heroic of fashions, yet the military personnel in charge of his body spin a more dishonest version and fill the holes with standard jargon about how much of a hero he was instead of going into specifics, thereby unintentionally doing a major disservice to the deceased by lying directly to his father to protect their own dignity. The film doesn’t go too far in its patriotic themes, though, as this is a much more sombre movie sprinkled with light comedy throughout that’s just about these three guys reuniting after many years and reminiscing over their own army days in Vietnam, which just happens to be set in a very interesting political climate, right in the middle of another war that would ultimately have little meaning for those involved (the capture of Saddam Hussein is shown on the news at one point, but that’s about the only positive thing they have to say about the Iraqi invasion).

The story is very slight, not filled with a whole lot in terms of character depth, and is mostly made up of a series of vignettes which see these three men going on this sombre journey together and waxing nostalgic about some of the good times that they shared together. However, part of what makes it work surprisingly well, and adds far more depth to it than the script perhaps gives, is the excellent comradery between Carell, Cranston and Fishburne, all of whom are brilliant actors that have come together to make something magical with their fantastic chemistry. Again, Linklater has proven time and time again that he is a master of the mundane conversation in modern cinema, and the way he has the actors just talk to each other, whether it’s swapping war stories like about how Doc was taken to a brothel back in Vietnam, or just discussing how things in modern day society are either fascinating or embarrassing (in one humorous exchange with Fishburne, Cranston’s Sal refuses to believe that Eminem is actually white after hearing one of his songs on the radio), are so naturally delivered and executed that you believe that these are real people, so much so that you want to hang with them in real life. These are a few charming guys with charisma to spare, and you enjoy going on this journey with them because they’re so likable and fun to listen to, particularly Cranston who steals almost every scene he’s in with his wisecracking attitude and deeply passionate lust for life.

Linklater is a filmmaker I’ve liked a lot over the years, and even some of his weaker films still manage to leave a small impression because of how calm and collected the filmmaking is, and especially how he directs actors in long conversational scenes that feel so natural you refuse to believe it was written down in a script beforehand. While I can’t say that Last Flag Flying is one of his stronger overall movies, especially in the wake of his 12-year masterpiece Boyhood, it shows how natural a filmmaker he can be with his actors and his themes, and gives the whole thing a beating heart that’s hard to resist, even in the most dour of situations, which makes it a pleasant and satisfying watch.

Last Flag Flying is a good-hearted movie that doesn’t go too far in its patriotic themes, and instead focuses a lot of its time and energy into making a trio of likable and entertaining characters that you genuinely want to go on this adventure with, which plays well into director Richard Linklater’s strengths as a filmmaker.