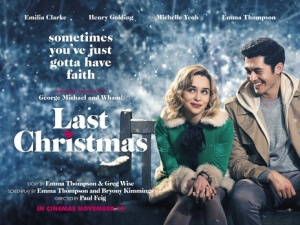 BASICALLY…: A cynical young woman (Clarke) finds hope in a budding romance with a man (Golding) she meets while working as a department store elf…

Since directing Bridesmaids, Paul Feig has had a pretty good track record with critical hits like The Heat, Spy, Ghostbusters and A Simple Favour all finding their audiences – sadly, the buck now stops with Last Christmas, a rare misstep for the director as he retreats into schmaltzy, cliched, and downright weird territory that tries so hard to be the new Christmas classic but lacks the genuineness and, erm, heart it needs.

I put the “erm” before “heart”, because Last Christmas takes heavy inspiration from the songs of the late George Michael, specifically the catchy lyric “Last Christmas, I gave you heart, but the very next day, you gave it away” and so on, which should already give you an indication as to what direction this movie is heading down, but the movie holds that card way too closely to its chest.

To be specific, the film is about a young woman named Kate (Emilia Clarke), who’s become anti-social, withdrawn and incredibly cynical since having a heart operation the previous year. Things begin to perk up a bit when she meets a handsome stranger named Tom (Henry Golding), who starts to inspire her to finally take drastic steps towards being a good person again, such as re-engaging with her estranged Yugoslavian immigrant family – among them Emma Thompson, the film’s co-writer, as the matriarch – and helping out her boss (Michelle Yeoh) at the year-round Christmas store in which she works.

If it sounds overwhelmingly twee, then you have good ears; the film is relentless in its schmaltz, slowly becoming more and more obnoxious as it tries so desperately to be the new Love Actually, but only succeeding in being a paper-thin, less defined version of that sort of film. Films like Love Actually are certainly cheesy but they at least have genuine charm to them, whereas this film feels very cynical in its attempts to be heartfelt, because at no point do you ever truly feel won over by the emotion from characters who you really don’t care all that much about, in a story that’s so dense and unambitious that it never sucks you in. It’s less Love Actually, and more like a Hallmark TV Christmas movie that’s somehow been given a bigger budget than its ilk (among them such titles as A Christmas Kiss, A Bride For Christmas, A Christmas Prince, and far too many others that have Christmas in the title), which makes perfect sense given what this movie eventually ends up doing.

Unlike other reviewers who have been far too eager to give the twist of this movie away (much like the ungrateful sod who George Michael gave his heart to in that song), I shall do my absolute best to going into exact specifics, because while I didn’t particularly enjoy this movie I will not let anyone else’s experience of it be ruined because of it. That being said, this movie drops a pretty big bomb late in the movie that you actually can’t believe a film by people of actual talent would actually drop, because it’s the kind of twist that a screenwriter would come up with when they’ve written themselves into a corner and have no other intelligible way of getting themselves out of it. Even worse, it comes way too long after the audience has picked up on the numerous hints towards it, so we are just sitting there for the entire time waiting for the other shoe to drop because the second things kick into gear we know that it’s going to happen eventually. The whole movie hinges on this one development that’s ridiculous even for this kind of movie, and it’s a pretty weak thread to cling onto because it’s such cliched tripe that it makes the writing of Elf look more realistic by comparison, which renders the entire thing a pretty frustrating movie to sit through.

Even beyond the lame twist, the movie is just not very well-conceived. Co-writers Emma Thompson and Bryony Kimmings ply on the awkward humour which Feig tries to make work by for the life of him cannot seem to crack it, to a point to where his actors don’t look natural when they’re delivering their lines (Yeoh’s character gets a wildly unnecessary romantic sub-plot, with a creepy German man whose eyes are bugging out hardcore, as though he’s been given very little in terms of direction). In its emotional scenes, it feels manufactured and manipulative, all while trying to sell you a soundtrack of George Michael’s greatest hits, which play constantly over the course of the movie. As for the central pairing of Emilia Clarke and Henry Golding, there is a spark of chemistry between them, but their characters are either too dull or overly unsympathetic for you to really care about either of them.

It’s a movie that really, really wants to be the new Christmas movie that people will want to watch around this time every year, but it lacks the genuine spirit, the intelligence, and most appropriately of all the heart to be anything but the cynical festive misfire it unfortunately is. Sorry, Mr. Feig, you’re a good director and from what we’ve heard about you you’re also a pretty cool guy, but this is a gift people will be giving away the very next day.

Last Christmas is an overly schmaltzy, cliched and downright lame attempt to be the new festive movie classic, with an ill-conceived script that director Paul Feig fails to completely bring to life, including a deal-breaking twist that’s so embarrassing that you can’t believe that professionals would actually put it in their mainstream Christmas movie.

Want to decide what the movie’s like for yourself?
Check out Last Christmas showtimes in London
via