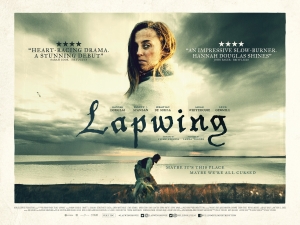 BASICALLY…: In 16th century England, a community is torn apart by a forbidden love affair…

You think things are tough nowadays, with all the hostility towards migrants and general misogyny circulating in the world? Count yourself lucky, because you weren’t born in the 1500s, when things were considerably worse on both counts. Or, at least, that’s the message that Lapwing wants to get across, and it does so with disturbing detail that make you feel all queasy inside.

The debut feature of both director Philip Stevens and writer Laura Turner, Lapwing is a historical drama with twinges of gothic horror, casting light on a controversial decree that actively persecuted countless foreigners, not to mention a level of brutality and violence not seen since Jennifer Kent’s The Nightingale. At once uncomfortable, but always intriguing, this is a impressive debut for the respective director and writer.

The film is set in 1554, when the Egyptian Act was signed into law, effectively barring any Romani citizens or travellers to remain in the country, under penalty of death – and the same goes for anyone who is found to be helping them in any way. So, as you can imagine, racial tensions are high at this point in history, especially in a small beach community of salt farmers where we lay our scene. They are lorded over by a monstrous bully named David (Emmett J Scanlan of Peaky Blinders), who keeps his small legion under control in whatever ways he sees fit, including young Patience (Hannah Douglas) whose stammer renders her all but mute (save for her singing voice, for which she is granted the titular nickname). David soon makes a deal with a refugee Romani family to hide them until a ship can take them away, but their son Rumi (Sebastian De Souza) manages to befriend Patience, and as one thing leads to another she winds up tearing her community apart. Or is it really the work of David, whose paranoia and mental instability is turning him into an even greater monster than he was before?

Don’t expect much in the way of Romeo and Juliet-style forbidden romance, for while the love affair between Patience and Rumi is certainly a driving force, it is hardly Lapwing’s defining feature – in fact, it’s a while before Sebastian De Souza pops up one last time in the third act. If anything, it leads directly into the film’s much more menacing angle of pure hatred, particularly in the form of David who really is one evil bastard. It’s bad enough that he’s openly racist and mocking of the destitute migrants who have come for help, but he’s a conniving, abusive, entitled and utterly irredeemable bully who makes everything worse even without the presence of the Romani family. Emmett J Scanlan is certainly enjoying himself with such a nasty piece of work, often going for a wildly theatrical performance that just borders on the edge of being cartoonish, but the important thing is that his character represents a truly graceless evil that sadly occupied the mind of folks in the 16th century, and to some extent still exists in the poisonous minds of some.

Because you are faced with such dread and menace in this character’s disgusting manner, it makes you feel all the more sorry for the other characters, particularly poor Patience whose speech difficulties and identity as a young woman is unfortunately a frequent target for his bullying and, in one of the film’s most disturbing sequences, his manhood. The acting overall is solid, with Hannah Douglas working well with barely any dialogue (save the few moments she gets to sing), which Laura Turner’s script is equally as strong at relying as little as she can on. Both director Philip Stevens and cinematographer Stewart MacGregor makes effective and even haunting use of the vast, open plains of the beach where the action takes place, occasionally captured via some striking magic-hour imagery, to really add to the gothic atmosphere and violating circumstances. Style seeps in during some slow-motion dream sequences and tight close-ups of characters’ faces during particularly horrific scenes, and once again the filmmakers have a strong enough hold on the craft to make it seem tasteful without completely going into exploitation territory.

Importantly, though, Lapwing serves well at introducing a slice of history that has long since been forgotten by the history books, which desperately needs to be reminded of nowadays as we head into uncharted territory with today’s migrant issues. The 1554 Egyptian Act was a barbaric decree that discriminated and violently persecuted against anyone not born in this country, and while we are (hopefully) safe from ever seeing a repeat of such a thing in the 21st century, it should be a historical word of caution to anyone thinking of setting up ruthless authoritarianism for helpless refugees who only want a better life for themselves. At the very least, this movie is a strong start in educating the public about the hate that such an act can cause.

Lapwing is a bleak and menacing historical drama with strong hinges of gothic horror, which explores the pure hatred brought upon by the controversial 1554 Egyptian Act towards migrants as well as other 16th century factors, all told with a brutal force by its filmmakers and cast.

Now that you’ve read the review, why don’t you now take a look at our exclusive interview with director Philip Stevens, writer Laura Turner, and lead actress Hannah Douglas? Check it out right here…

Lapwing is now showing in cinemas nationwide, and is available to rent/buy on digital platforms, including Amazon Prime Video.