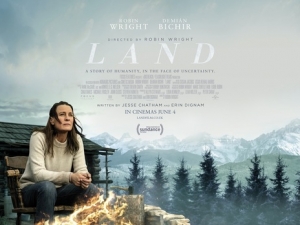 BASICALLY…: A woman (Wright) begins to live in an isolated cabin in the middle of the wilderness…

You can’t fault Robin Wright for going all in for a passion project like Land. Making her feature directorial debut as well as starring in the film, the actress and first-time filmmaker has clearly taken the central concept to heart, for it presents an opportunity for her to not only spend a lot of time on-screen alone and show a wide range of emotions, but also flex her visual storytelling muscles by capturing some stunning outdoors cinematography.

However, while it’s easy to appreciate Wright’s dedication to the project, the whole thing falls apart due to a flat script and lack of real investment, making this otherwise pretty movie rather hollow and dull to comprehend.

Wright stars as Edee, a city woman with severe depression issues following the largely unexplained deaths of her husband and young son. She no longer feels comfortable being around people, so she retreats to a secluded cabin deep within the Wyoming mountains, with only the barest of essentials to her name and little to no contact with the outside world. At first, Edee is woefully ill-prepared for life in seclusion; she keeps getting blisters from attempting to chop wood, her attempts to grow plants and vegetables end disastrously, she isn’t able to hunt, and she’s scoffing her last can of food before the long, cold winter hits. However, just as she’s about to succumb to the deadly combination of starvation, dehydration and freezing weather, along happens a hunter named Miguel (Demián Bichir), who nurses her back to health and begins to show her some far more efficient ways to fend for herself. Pretty soon, Edee gets the hang of things and eventually becomes the self-sufficient person she originally set out to become.

It’s all well and good making a movie where you’re also starring as the isolated individual who’s alone for most of your screen-time, but you do need to make sure that there is a good enough reason for the audience to spend the majority of time with this person, like a character trait or some kind of tragic backstory. Here, though, the script – by Jesse Chatham and Erin Dignam – gives Wright surprisingly little to work with as both director and star, since Edee is a closed door for most of the movie, refusing to reveal too much about herself to others until it’s far beyond the point where we should really care about this person. It’s clear early on that she’s going through some sense of loss, and that her family is no longer around, but instead of diving deeper into this character’s backstory or even any complex feelings of guilt or regret, director Wright decides to spend most of her time in front of the camera staring out at nothing without saying a word, hoping that this will substitute for a much-needed emotional core which the film simply does not provide. Because of that, it’s hard to muster up any feelings for this person or even a reason to care at all, since she comes off as a stubborn recluse than the damaged soul that this script clearly thinks she is.

While Land unfortunately leaves you yearning for a much deeper and more resonant emotional experience than what we get, it’s barely saved by how absolutely beautiful it looks. Wright and cinematographer Bobby Bukowski do their best to make this a very pretty movie to look at, capturing the vast wilderness with a firm grasp on its radiant natural beauty and stunning shots of the night sky or the pink-tinted sunsets. As a visual smorgasbord of outdoor cinematography, and even some of the darker, much bleaker indoor shots of Edee’s deteriorating physical and mental health, Land undoubtedly strikes hardest.

However, it doesn’t entirely excuse the fact that you’re ultimately watching a movie that falls empty on any kind of emotional core, or even a compelling enough narrative to hold you through. Aside from the occasional bear showing up to wreck all of her things, Land is mostly uneventful with Edee herself not being an entirely sympathetic protagonist, because she is again stubbornly refusing to communicate with people even in her most desperate moments, and what we should know about her is held right before the end when we’ve exhausted all reasons to stay invested. I feel that’s far more down to the hollow script more than Wright’s direction and performance, both of which are fairly decent here, and if anything it shows that perhaps with a much meatier script Wright could actually make and star in a movie that’s a lot more interesting than this.

For whatever reason, though, Land is a passion project for Wright where the passion wasn’t poured as much as it could have been into more substantial areas than just pretty cinematography.

Land marks a visually impressive but ultimately empty directorial debut for is star Robin Wright, who attempts to substitute the script’s hollow plot and characterisation with moody and often stunning cinematography, but can’t disguise its uneventfulness and severe lack of a proper emotional core.

Land is now showing in cinemas nationwide – find a screening near you right here!