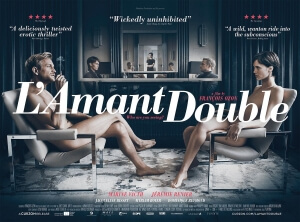 BASICALLY…: A damaged young woman (Vacth) falls in love with her psychiatrist (Jérémie Renier), but soon discovers that he may be hiding a secret from her…

Now that the trilogy is (mercifully) complete, we can safely look back on how the Fifty Shades movies were not just terrible movies in terms of plot, character, structure and everything else, but were also about as sexy as a damp tea towel in the middle of the kitchen floor. All three films were often criticised, and rightfully so, for their lack of spark in the numerous sex scenes, which were pretty much why EL James’ books flew off the shelves in the first place, and were so vanilla that the characters eventually started using vanilla ice cream in their love-making. They so desperately wanted to be like the kinds of erotic thrillers you would see around the 80s and 90s, but got everything about what made movies like Basic Instinct, Body Heat and even notorious Bruce Willis flop Color of Night come off as titillating and thrilling completely wrong.

Set in Paris, we follow Chloe (played by Marine Vacth, who I had to keep reminding myself throughout the movie that she is NOT Felicity Jones, because the resemblance is uncanny), a young woman who has been getting some strong stomach pains and, after deducing the pain may be psychological, begins to see a therapist, Paul (Jérémie Renier; seriously, what is it with this movie and its actors reminding me so strongly of other actors? I kind of wish that Jeremy Renner was actually in this just to spare me further confusion. Oh, I’m getting off-topic…). Anyway, throughout their sessions, Chloe and Paul fall in love and become a couple, but later she discovers that he has been hiding a very personal secret: he has a twin brother, Louis (also Renier), a psychoanalyst and who is also a lot more brash and aggressive than the calmer, more subdued Paul. It doesn’t take long for Chloe, however, to fall for the twin’s bullish charm, but as she gives in to her sexual desires she also descends further and further down a rabbit hole she slowly realises she probably shouldn’t have fallen into.

As for the eroticism of this movie, it succeeds in creating a far more alluring and enjoyable set of sequences than any of the Fifty Shades movies combined. Ozon is a filmmaker who I’m not too familiar with, though I know he’s done plenty of other films in the past (I recall one of his more recent ones, the World War 1 drama Frantz, being covered as a preview on this very website one or two years ago), but from what I gather he is a director who likes to play around with the idea of sexual liberation in some of his work, and given that one of the first shots of this film is a close-up of a vagina during a gynaecological examination, I’d say he’s very comfortable with showcasing the human body in a matter-of-fact way like this. His tight and firm direction, not to mention the resounding bravery of lead actress Vacth to appear full-frontal nude on more than one occasion, keeps the pulse racing in these scenes and leaves you about as breathless as the characters, even when the film decides to not-so-subtly zoom in on her “O” face and then her pulsating vagina when things come to a crescendo. As over-the-top as some of these scenes can get – I haven’t even mentioned the strap-on scene – they are directed and acted in a way that really raises the spirits, as well as raise other parts in the process.

On top of its delightfully entertaining grasp of the erotic thriller sub-genre, this is also a film that isn’t afraid to go completely overboard, and when it does things go to a whole new level of crazy. You know you’re in for a good bit of absolute insanity when one of the first sex scenes in the movie is a dream sequence where Vacth’s Chloe is being loved up and down by both identical twin brothers, who start making out with themselves and then with a two-headed Siamese version of her. The bonkers imagery doesn’t let up from there, especially as the film gets into its second half where it gets a lot more surreal and even nightmarish, featuring visuals you kind of have to see to believe. As you may imagine, twins and symmetry are a huge theme of this movie, so you’d be absolutely on the money when you predict the incessant symbolism that’s all throughout this thing (Mirrors! Scenes that seem identical to each other! More mirrors!), and just how far Ozon goes to showcasing these themes on-screen is the result of a pure mad genius.