Lady and the Tramp (Review)

Lady and the Tramp (Review) 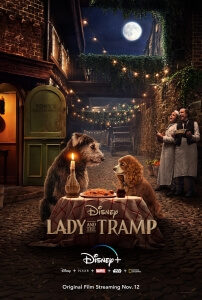 BASICALLY…: A domesticated Cocker Spaniel named Lady (Thompson) meets and falls in love with a homeless stray known as the Tramp (Theroux)…

Yes, it’s easy to whinge and complain about Disney’s live-action remakes and their unnecessary existence when the originals are, and always will be, far superior – but given everything that’s going on in the world right now, can we please just lay off the hate for a little while? While it’s true that the newer versions of The Lion King, Aladdin and Beauty and the Beast aren’t even a patch on the animated classics they were based on, we need these timeless stories now more than ever to help us get by, and with the UK launch of Disney+ coinciding with the country’s lockdown there’s never been a better time to not only revisit the films we cherished in our childhood but to also check out some newer versions which, for all their faults, tell stories that we always love to hear.

In the case of Lady and the Tramp – the first of the Disney live-action remakes to get an exclusive release on the company’s new streaming service – it’s one that you’ll have no problem hearing from a new set of mouths, and while nothing can compare to the original (as always) there is charm and warmth to this version that honestly makes it one of the stronger remakes that the corporation has put out yet.

If you’ve ever seen the original, then the plot is pretty much the same as before: a Cocker Spaniel named Lady (voiced by Tessa Thompson) lives a privileged life with her adoring human owners known as Darling (Kiersey Clemons) and Jim Dear (Thomas Mann), but when the couple are expecting a baby Lady’s sheltered world begins to shatter. Soon, she crosses paths with a stray mutt known as the Tramp (Justin Theroux) who’s a lot more street-wise and therefore more weary of the world, and the two dogs begin to form a strong bond with each other, despite the fact that they come from vastly different backgrounds.

It’s a movie that gives you exactly what you’re expecting, no matter what attitude you have going into it; if you want Lady and the Tramp but done with CG dogs which sometimes look convincing but other times not so much, then you’ll get it in spades; if you want to watch it just because you’re unashamedly a dog person, then this movie has plenty to chew on (no pun intended); or even if you’re wanting to be angry with it for merely existing when a perfect hand-drawn masterpiece already exists, then I’m just sorry you have such a cynical nature of the world. The point is, this movie is one that serves its purpose to almost every viewer, but in my case, while I wasn’t expecting anything spectacular I have to say I was a little surprised by how much it worked for me.

There’s a lot to like here, from the charming voice performances to the delightful cinematography to even the CGI which, again, isn’t always the most convincing but definitely highlights the cuteness of these dogs’ faces, fur and even stature. Needless to say, this is heaven for dog lovers, because not only are they adorable but they make you want to cuddle up with your own dogs even more, as it consistently makes you fall in love with them just as much as the two title characters do. Speaking of whom, they share a nice chemistry here – in fact, I’d even go so far as to say it’s stronger than the characters in the original – which is accented by the vocal performances of Tessa Thompson and Justin Theroux, which are both charming and delightful in their own unique ways. They have scenes together that feel legitimately romantic, aided by some nice cinematography that encapsulates the feel of this town at the turn of the 20th century, especially at night which is when the atmosphere really shines brightest.

Like all the other Disney remakes, this one also recycles classic scenes from the original, including that famous spaghetti scene which is recreated almost shot-for-shot, and like a lot of them they end up being both strengths and weaknesses for the film. Some of these recreations work fine, such as aforementioned spaghetti scene, but then out of nowhere springs a big musical number that feels out of place for the tone of movie it’s going for; the “He’s A Tramp” number, sung by Peggy Lee in the original and by Janelle Monáe here, looks and feels like it’s come straight from one of the Beverly Hills Chihuahua movies instead of this more sophisticated Disney remake; and the Siamese cat sequence – heavily reworked for obvious reasons – ironically proves less memorable than it was in the original. Though these call-backs to the animated classic don’t always work, they feel a lot cleaner and less conspicuous than, say, last year’s The Lion King remake, and compared to some of the other recent ones this one feels a lot stronger, just in terms of actual charm and warmth.

As already said, you’ll get exactly what you’re expecting when you watch this, but I personally enjoyed it enough to appreciate it on its own terms, and it served as a bit of light relief that is sorely needed right now. Make sure you queue it up to watch – but only after you’re done watching The Mandalorian.

Lady and the Tramp injects a lot of charm and warmth into its live-action retelling of the animated Disney classic, and while not all of the call-backs end up working – and, of course, it can never compare to the original – it has enough of a heart for you to appreciate on its own terms, especially if you’re a huge dog-lover.