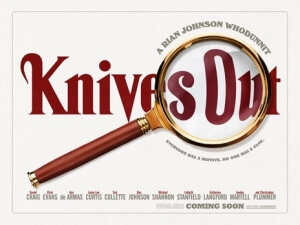 BASICALLY…: When a wealthy crime novelist (Plummer) is found dead, Detective Benoit Blanc (Craig) suspects a member of his extended family is to blame…

This review is of the cut shown at the BFI London Film Festival in October 2019 – the UK release date is currently listed for November 29th 2019.

“The game is afoot,” says a character in one of many instances in Knives Out where writer-director Rian Johnson makes his love for the murder-mystery genre known. From the Sherlock Holmes references to characters watching episodes of Murder, She Wrote, Johnson’s love letter to the genre contains several nods to classic sleuths and Agatha Christie-style situations, but the film doesn’t rely too heavily on the conventions of the past. Instead, it subverts them in modern and intelligent ways, and makes for one hell of an entertaining movie that stands firmly on its own as a solid mystery movie.

The film begins when 85-year-old wealthy crime novelist Harlan Thrombey (Christopher Plummer) is found dead in an apparent suicide. Detective Benoit Blanc (Daniel Craig) is hired by an unknown source to investigate the untimely death, which includes speaking with several members of Thrombey’s extended family – a dysfunctional unit if ever there was one, from Harlan’s uptight daughter Linda (Jamie Lee Curtis) and her husband Richard (Don Johnson), to airhead sister Joni (Toni Collette) and her daughter Meg (Katherine Langford), to weary son and publisher Walt (Michael Shannon) and his teenage son Jacob (Jaeden Martell), all the way to obnoxious trust-fund “black sheep” Ransom (Chris Evans) – to see if any of them had any motive, if at all. Also in the mix, and who might also be key to the entire mystery, is Harlan’s caring nurse Marta (Ana de Armas), the sole suspect to not come from a privileged or wealthy background – she lives in a small flat with her immigrant mother and sister, compared to the giant mansion and estate the Thrombey family are comfortable with – and, uncoincidentally, the character that gains most of our sympathy.

Part of the genius of Johnson’s film is that while the plot is classic murder-mystery territory – wealthy patriarch is murdered, and everyone is a suspect; haven’t heard THAT before – the actual murder-mystery itself is only the glue for sticking together a group of unexpected and very timely themes. Class, white privilege, and even immigration are all topics raised within the story, often with satirical bite but also as a means to show how these rich suspects, regardless of whether or not they committed the crime, are all pretty terrible people. They lie to, cheat on, steal from, and scream at each other whenever given the opportunity, always assuming they should get what they deserve because the now-dead patriarch had enough money for them to fall back on. Some of them are shown getting into arguments about Trump-era policies on immigration, and they all might as well be wearing those red MAGA caps while doing so, because those debates have that sense of phoniness that only rich white people can emit when discussing topics they know less about than they’d care to admit. Johnson barely lets any of them off the hook, and it’s gleeful fun watching these horrible people fall apart, even when there is a death to be solved at the heart of everything.

As for the mystery itself, it’s a wildly fun ride from beginning to end. It constantly keeps you guessing, even when it seems that everything is revealed to us, and you’re constantly kept on the edge, unsure of where any of it is going to lead. Part of the enjoyment is not just Johnson gleefully paying homage the styles and tones of several murder-mystery stories of the past while also injecting enough of his own voice into the mix, but from a cast who is having the time of their lives playing up their wildly flamboyant personas. Character actors like Jamie Lee Curtis, Michael Shannon, Don Johnson and Toni Collette get lots of chances to revel in their eccentric and often horrendous personas, while bigger-name stars like Daniel Craig and Chris Evans are so delightful to watch in their own unique ways – Craig, in particular, adopts a thick Southern accent that would have made him an ideal recasting for Kevin Spacey on House of Cards (that is, if they hadn’t gone the way they did with that final season – the less said about it, the better). It is very much an ensemble piece, with every actor getting just enough material to stand out whilst not hogging the spotlight, although the film’s secret weapon is Ana de Armas, in a sweetly emotional performance that makes her the perfect audience avatar. Not a whole lot should be said about her character, but as more and more plot points are revealed, it will be easy to see why she is the movie’s MVP, even in a cast that includes James Bond and Captain America.

The movie is a blast all the way through, with some members of the audience I saw this with bursting into spontaneous applause nearer the end. It’s great to see a genre that has been a little too stuck in its traditions be received and executed in such a modern fashion, and hopefully it will be enough to get all those whiny fanboys who are STILL ranting about Star Wars: The Last Jedi to finally respect Rian Johnson as a fun, intelligent filmmaker with just as much consideration for his audience as he does for the material at play.

Knives Out is a devilishly entertaining whodunnit that writer-director Rian Johnson keeps consistently engaging throughout, tackling some unexpectedly modern themes with a cast that’s having just as much fun as he is, and making a genuinely compelling mystery that has a lot of crowd-pleasing attributes which should make it a hit with audiences.

Want to decide what the movie’s like for yourself?
Check out Knives Out showtimes in London
via