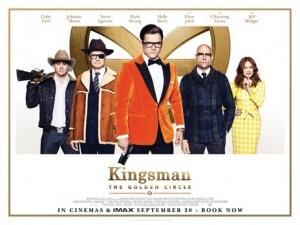 BASICALLY…: When the Kingsman headquarters are destroyed, surviving agent Eggsy (Egerton) travels to America and requests the help of the Statesman agency…

Nobody could have predicted that Kingsman: The Secret Service, a spy-centric action caper based on the graphic novel by Mark Millar, would be as entertaining as it ended up being. But against the odds, director Matthew Vaughn and writer Jane Goldman, who also collaborated on another Millar adaptation Kick-Ass, ended up making a movie that ended up giving audiences the thrill ride they had no idea they needed, with visceral and manic action sequences, an all-star cast in enjoyable supporting roles, and an unpredictable and batty sense of fun all throughout.

Part of its charm was mostly the fact that it came out of almost nowhere to give us the entertainment factor we were so craving at the time, and that it was so crazy in its over-the-top values and executions that it was a considerable breath of fresh air in a market dominated by big, bloated, overly-ridiculous, CGI-heavy action movies that just kind of blended together.

Ironic, then, that the eagerly-awaited follow-up Kingsman: The Golden Circle is exactly all of those things the first one set out to separate itself from, and sadly it amounts to a sequel that is not only disappointingly inferior to its predecessor, but perhaps takes a few steps too far over the top, even for a zany spy movie like this.

It picks up roughly a year after the first one, where fresh-faced Kingsman agent Eggsy (Taron Egerton) is busy serving his country within the secretive spy firm while also keeping a balance in his regular life, including his extravagant relationship with Swedish Princess Tilde (Hanna Alström), a character that was at the centre of some complaints in the first film regarding a tasteless sex gag that bookended it, and is now for some reason expanded into a much larger supporting role (I guess the public loves anal sex as much as this character apparently does). But trouble is afoot when the reclusive and eccentric drug dealer Poppy Adams (Julianne Moore), who apparently is so wealthy from dealing the majority of the world’s drugs that she not only has her own hideout complete with a cinema and a 50s diner but also fully-functioning robot dogs (oddly enough, it gets stranger), destroys the Kingsman headquarters and wipes out all remaining agents, including a few established characters from the first film who here are just so unceremoniously killed off it’s almost insulting. Eggsy naturally survives, as does tech support Merlin (Mark Strong), and they both soon venture over to America where they encounter and acquire the assistance of the Statesman, basically the US equivalent to the Kingsman agency who instead of fine tailored clothing have their front be a whisky distillery and are named after types of liquor rather than Arthurian knights, because of course. However, the surprises don’t stop there are they also soon discover that Harry Hart (Colin Firth), Eggsy’s mentor from the first film and seemingly killed in action after being shot in the head, is alive thanks to the bullet narrowly missing his brain and going straight through his eyehole, and is now suffering from a seemingly-permanent case of amnesia, again because of course, as well as wearing an eyepatch that ironically makes him look like a cartoon interpretation of a Bond villain. Oh, and there’s also a henchman with an extendable bionic arm. And a lazer lasso that cuts people in half. And inflatable bags that can apparently bring you back from the dead. And a scene where a major plot point involves the main character inserting a tracking device via finger inside of a woman’s vagina. And another scene where Julianne Moore makes a burger out of the minced remains of a henchman, and gives it to another one to eat. And Elton John showing up in perhaps the year’s most bizarre extended cameo.

That’s basically a lot of words to say that this movie is absolutely insane, and not necessarily in a good way.

The first film was certainly out-there, but it kept things mostly grounded – a term used very lightly in this universe – and was reined in just enough to still seem credible in the face of something, as characters in that film put it, “far-fetched and theatrical”. This movie, however, proves that there is such a thing as playing too hard with your toys, and goes so far over the top that it can barely even see the top anymore, which destroys any sense that even a universe as crazy as this can have firm ground to stand on once in a while. Any sense of logic, even one for a world where sharp-suited gentlemen carry around with them an umbrella gun (a gun-brella?), goes out the metaphorical window once this movie introduces robot dogs into its established world order, and it never looks back when it probably should have if it were to regain its sanity.

It would be one thing if this movie retained the same kind of mad charm the first one had, but again it’s not as strong and it feels oddly tone-deaf for something that’s clearly meant to be played for laughs in most parts. It will start off as a standard action film, but will then turn into a sitcom with a minor sub-plot of Eggsy meeting his royal squeeze’s parents, aka the King and Queen of Sweden, only for it then to devolve again into a series of strange spy tropes that would be too silly for the Austin Powers movies to pull off, and so on and so on until it becomes apparent that this sequel has no idea what identity it wants to form if it’s to be in the same court as its far more surprising and focused predecessor. It gets so ridiculous in parts that it comes dangerously close to being this year’s Zoolander 2, but a far more accurate comparison would be with Men in Black 2, another disappointing sequel to a fun and entertaining movie that came out of nowhere, but also had no idea how to capitalise on its unexpected success so instead settled for something a bit too far-fetched for its own good (hell, both films contain plot points about a character from the first one experiencing memory loss and need to have it restored so they can help save the world… only this one doesn’t have Johnny Knoxville trying to act, so this one has the upper hand, I guess).

As for some of its newer cast members, don’t expect Channing Tatum or Jeff Bridges to stick around for long, despite prominent roles in the film’s marketing campaign, but at least returning actors like Egerton, Firth and Strong have enough strength in their shoulders to carry the majority of it. Firth was one of the highlights of the first one, and while his resurrection severely undermines the impact his death had previously, it’s at least nice to see him again in a franchise he can let loose in. Although, if the proposed third film in this trilogy keeps to the path this film takes, then there might not be much of a foundation to build a franchise on at all, or at least it’s one that starts off strong, but gets way too wobbly around the middle.

Kingsman: The Golden Circle is a disappointingly inferior sequel that takes things a bit too far over the top, and as a result it lacks the same kind of out-there charm the first film had, dissolving further into nonsensical madness instead of actually building on the surprising foundations that its predecessor laid out.