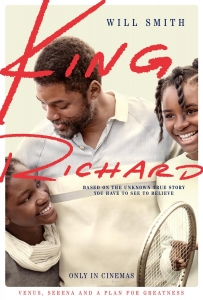 This review of King Richard was conducted as part of the BFI London Film Festival 2021.

There was a moment during King Richard where I could not stop thinking to myself, “wow, this movie is going to be huge when it comes out.” It is when Will Smith, as Richard Williams – father of superstar tennis players Venus and Serena Williams – sits his entire family down in front of the TV after young Venus scores an early victory during a Juniors tournament, which she and her sisters are proudly boasting about on the journey home. Richard, not too bemused by his daughters’ playful arrogance, decides to play them a film to remind them about the strengths of humility (keep in mind: this comes directly after a scene where he seriously contemplates abandoning them at a local store just to teach them that same lesson). The movie he chooses is none other than Disney’s Cinderella, of which we only see the opening titles and ending stinger (this of course being a Warner Bros production and not Disney itself), but the intent is made crystal clear: by showing his girls a timeless story of humbleness and grace even when in the face of true adversary, he further instils the importance of being a gracious and good-hearted individual no matter what life throws at them.

At that point, members of the packed house I was seeing this movie in had all sorts of emotional reactions: some laughed, others cried, and there was even the faintest hint of applause when that scene was over and done with. That’s when I knew that director Reinaldo Marcus Green had something very special in his grasp, which has a real chance of connecting with audiences in the same way that something like The Blind Side or Jerry Maguire or Little Miss Sunshine did before it – and it wasn’t even an actual tennis scene that prompted such a reaction.

Green’s enormously crowd-pleasing movie tells the story of how Richard Williams (Smith) groomed his young daughters, specifically Venus and Serena (played by Saniyya Sidney and Demi Singleton respectively), to be world-beating champions but also top-tier humans in general. As we quickly learn, Richard has dedicated his entire adult life to ensuring success for his daughters, even putting together a 70-odd page plan that maps out their complete road to glory before they were born, and putting his girls through strengthening training sessions to fuel their natural abilities which, with the help of his long-suffering wife Oracene (Aunjanue Ellis), keep them off the dangerous streets of Compton. His efforts finally start to pay off when Venus is selected to train with top coach Paul Cohen (Tony Goldwyn) and later Rick Macci (Jon Bernthal), putting both her and Serena on the path to becoming the tennis icons they’re known to be today, but as Richard’s stubbornness and ego start to get in the way of their rapid rise to stardom, he must also confront his own demons if he is to allow his daughters to fully ascend.

King Richard, from an original screenplay by Zach Baylin (a former art department member making his screenwriting debut here), is the kind of crowd-pleaser that literally pleases just about everybody. There are moments of drama, comedy, suspense and rousing Rocky-like underdog sportsmanship, none of which features a cynical bone in its body and feels utterly genuine in its approach and execution. Traditional sports biopic clichés are only brought in when they need to be, and in some cases they are dispelled entirely in scenes where, in a typical movie like this, the authorities would be called in by someone concerned for the well-being of the young girls, but once Will Smith runs a powerful monologue about why he and his wife are “tough” on their kids, that potential sub-plot is completely chucked out of the window. Director Green is completely focused on making the title character, his family and other supporting characters feel real and identifiable in a story that could have easily sanctified them beyond recognition (particularly as Venus and Serena Williams themselves are credited as executive producers), but instead address their frequent arrogance and irritating stubbornness which make them more dimensional than some other sports movie biopics of late (12 Mighty Orphans comes to mind).

Then, there’s Will Smith, an A-list movie star who’s been playing it reasonably safe over the last few years in forgettable studio fare like Aladdin, Suicide Squad and Bright, but in King Richard finally lets himself go places that he as an actor has not been able to for at least a decade. Smith is absolutely fantastic in this film, slyly building on his trademark movie star charisma to play a much more lowly and even pathetic figure than we’re used to seeing him act as, but one with extremely noble intentions and an incredibly likeable magnetism that makes him a rather compelling character, brought to life by what has to be one of the actor’s greatest performances. He has great on-screen support with Aunjanue Ellis stealing scenes as his equally supportive wife, Saniyya Sidney and Demi Singleton making waves as the young tennis superstars, and my personal favourite of the bunch Jon Bernthal who is simply magical every time he appears on screen as Rick Macci (and while everyone is rightly bound to focus on Smith for the lead actor Oscar, I would absolutely love to see Bernthal get recognition for his supporting turn as well).

Above even the tennis – shown in some of the most exhilarating on-screen depictions of the sport since Borg vs. McEnroe – King Richard is an ace of a family drama, showing the pitfalls of this patriarchal dynamic and the strength of their determination to win and, most importantly, remain good and humble as Cinderella suggests. It’s things like this that would make me shocked if this movie underperformed at the box office, because this is one that audiences are easily going to fall in love with, and for good reason: not only is it a true score for its lead actor, but it is a compelling and genuinely pleasing movie that’s destined to become a favourite for many.

King Richard is a bona fide crowd-pleaser that audiences are going to fall in love with, least of all for it contains perhaps Will Smith’s grandest performance in the title role, and for its heart-warming depictions of family and encouragement.

King Richard will be released in cinemas nationwide on Friday 19th November 2021 (as of publication).