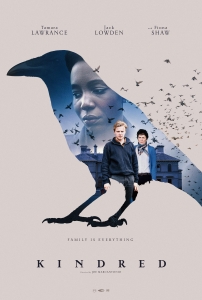 BASICALLY…: After her boyfriend suddenly dies, a pregnant young woman (Lawrence) suspects that his family has sinister plans for the unborn child…

Not to trivialise most of actress Fiona Shaw’s career, but if you ever find yourself in a situation where she is serving as some type of maternal figure, chances are you’ll be in for a miserable time. Of course, most know her as Harry Potter’s nasty Aunt Petunia in those movies, but in Kindred she plays a frightful figure that makes the Dursley matriarch seem like Mother Teresa by comparison (well, almost; as terrible a person she may be playing here, at least she actually attempts to treat the main character well, rather than make them sleep in a cupboard under the stairs).

Her fearsome supporting turn is a highlight of the dreary, downbeat psychological thriller from director and co-writer Joe Marcantonio, which twists the knife perhaps a little too deep into your skin and leaves an all-too sour scar from its handiwork.

The film begins as Charlotte (Tamara Lawrence) and her loving boyfriend Ben (Edward Holcroft) visit his family estate to inform his estranged mother Margaret (Shaw) and his overbearing half-brother Thomas (Jack Lowden, also a producer on the film through his new production company Reiver Pictures) that the two of them are moving to Australia in order to start a new life together. However, the couple face a couple of notable setbacks; for one, Charlotte finds out that she’s pregnant, but has no intention of keeping the baby, and for another, Ben suddenly dies in a freak accident. A grieving Charlotte almost immediately finds herself in the care of both Margaret and Thomas, who seem very keen to keep her from leaving the estate, even drugging most of her drinks to keep her in a dizzy state as her pregnancy progresses by the month.

A lot of the film is practically psychological warfare, as Charlotte’s captors – for that’s really what they are, no matter how hard they insist otherwise – constantly use gaslighting tricks and all-too convenient diagnoses from the family doctor to keep her trapped in a Victorian-era manor where the wallpaper is peeling off and strange displays of stuffed animals rule the décor. There is a clear menace to these all-too keen carers of the grieving mother-to-be, and both Shaw and especially Lowden’s performances reflect their sinister nature scarily well, with the latter saying everything about his sinister character with just the inflictions of his eyes and without him rarely raising an octave in his voice. These are people who has mastered their manipulative ways to such a degree that no matter how hard Tamara Lawrence’s protagonist (who, through the course of this movie, just has the worst luck imaginable) tries to outplay them, they are always two or even three steps ahead. They alone make most of this movie a rather chilling and uncomfortable sit, especially during the ending which is bound to be a divisive one amongst viewers.

Kindred is a horror that is far more subtle than a lot of other standard movies of the same genre. There are zero jump-scares, no loud musical stingers, and not even any menacing imagery; it’s all based solely on mood, and director Joe Marcantonio manages to sustain a very bleak atmosphere that matches this increasingly distressing situation, which often does give you chills from how horrible and controlling people like these can be. The quieter, less in-your-face style of horror is an interesting change of pace from a lot of the sub-par supernatural thrillers of late, although in some places it perhaps could have used a bit more of that, because a lot of the movie relies on very dry, stoic dialogue with one too many conveniences that constantly hold our main character back from truly escaping. Not that a jump-scare would have made any of it better necessarily, but it would have at least livened things up a little bit, because it has direction that needs a bit more oomph and a script with some more flavoursome scenarios that feel more natural and not nearly as contrived.

The movie is a decently shot one, with eerie cinematography capturing the rotting interiors of this large, archaic house/prison, and some of the framing also manages to seem quite chilling, with characters just lurking in the faded background like they’re Michael Myers eyeing his next kill. You can tell that the filmmakers wanted to make a very cerebral horror film, as opposed to just making another throwaway scare-fest, and to its credit Kindred definitely feels unique among some of the more mainstream horror movies of the last short while. However, it’s still lacking a certain personality underneath its dry exterior, and needed some extra energy, no matter how little, to go further with some of its chilling themes and unsettling characters.

Kindred is a subtle psychological thriller that has its occasional chills, whether it’s via some eerie cinematography and atmosphere, or from a couple of intimidating performances from Fiona Shaw and Jack Lowden, but it perhaps needed an extra boost of energy to rise it above some of its drier and bleaker moments that leave a more sour aftertaste.

Kindred is now available on Sky Cinema and NOW TV.