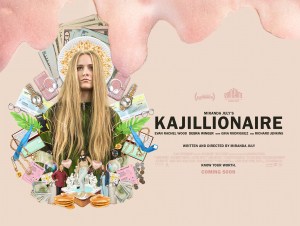 This review is of the cut shown at the BFI London Film Festival in October 2020– the UK release date is currently listed for October 9th 2020.

To describe Miranda July’s third film – her first in nine years – Kajillionaire in a short sentence is hard enough, but to discuss it in far greater detail is a challenge in and of itself.

July’s absurdist comedy-drama defies convention repeatedly, starting off as one thing and then ending up somewhere completely different as well as unexpected. It’ll likely baffle most mainstream audiences, with its strange and unpredictable nature, but it’s clearly got some ambitious things to say about the human existence, and the overwhelming desire for personal connection – all under the guise of a con/heist plot, as though Danny Ocean and his crew had less of a dress sense. It’s certainly an interesting movie to say the least, though it is not beyond reason to not fully warm to it either.

The film is about a family of grifters, Robert (Richard Jenkins), Theresa (Debra Winger) and their 26-year-old daughter Old Dolio (Evan Rachel Wood). Throughout her whole life, Old Dolio has been treated less like a daughter and more like a business partner, actively assisting her parents on numerous schemes to earn quick cash, from stealing mail to attending parental classes under someone else’s name to claiming lost luggage on plane journeys. It’s during the latter scheme that her parents meet Melanie (Gina Rodriguez), a fast-talker who becomes interested in the family’s grifting game and invites them on a scheme where they visit the homes of numerous OAPs and steal antiques they can later sell off. Meanwhile, Old Dolio is becoming more and more desperate for the kind of love and affection that her parents never gave her, and it leads to some life-changing decisions that leave an impact on her for the better.

The key theme of this movie is human connection, a subject that July previously tackled in her debut film Me and You and Everyone We Know; as we learn more about Old Dolio – including the origins of that very bizarre name – we learn that she is a product of people with such little faith in humanity that their first instinct in genuinely alarming situations is to ponder how they can financially benefit from them. She is extraordinarily introverted, from her ability to perform cat-burglary somersaults like they were nothing, right down to her baggy dress sense, straightened long hair, and a deep monotone voice that sounds like an angsty teenage boy. It’s only when she attends those parenting classes – under the name of someone reluctant to go, of course – and learns about infant facts such as the “breast crawl” that she starts to realise she herself has never received such affection from anyone; she can’t even a masseuse touch her back without invoking a strong emotional reaction. What July does well here is to show Old Dolio’s transformation from a shy, anti-social young adult to somebody who realises the consequences of her parents failing to give her something close to a normal childhood, which they defend as not wanting to seem fake in front of their own daughter. Additionally, Evan Rachel Wood’s pitch-perfect performance puts the character’s deep insecurities on full display, with a firm emphasis on her slowly blossoming desire for independence that is, in true Miranda July fashion, accompanied by some truly out-there inflictions and sullen body language.

July’s approach has the capacity to both impress with its straightforward and idiosyncratic plot and style – look out for odd imagery such as the pink bubbles seeping through the ceiling of the abandoned office where the family lives, or a metaphysical sequence where we’re transported to the stars for a monologue on mortality – but also alienate with those exact same things. I wouldn’t say it’s a crowd-pleaser exactly, although its final moments may hint at such a thing, but there’s something to its offbeat and quirky nature that might irk some people who just want to watch something that isn’t going to appear artsy and unique just for the sake of it; because of that, it’s easy to see why some people may call it pretentious and long-winded, although it clearly has a sense of humour as it gets a few digs at the family’s dysfunctional and cynical view of the world. Though I felt that the movie had enough going for it with its thoughtful handling of the central themes, not to mention how Evan Rachel Wood is watchable in just about anything, I can see people easily being turned off by Kajillionaire and its wildly unorthodox approach.

Perhaps it can be best summed up by one key sequence, which sees the grifters work their way into the home of a dying old man, and to keep him satisfied while they look for his chequebook, they pretend to be a normal family that plays piano, watches golf on the TV and serves (empty) plates of cake. There’s a lot going on underneath the surface here, with not just the comedic situation but the falsely projected image of family being well and truly played up for completely cynical purposes, only then there’s the darker and much more emotional core to consider, and once it drops suddenly the very essence of the scene changes. That’s pretty much Kajillionaire; a zany con movie that slowly transforms into something completely unexpected by the end of it, but remains thoroughly compelling.

Kajillionaire is an absurdist comedy-drama that not many audiences will perhaps warm quickly to, but underneath its zany con/heist movie get-up is a meditative and emotional movie about the importance of human connection.