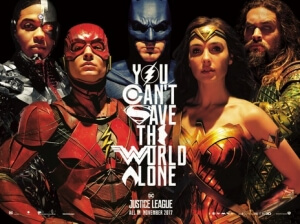 A lot has already been said about Justice League, even months before it even came out. It’s had a rough ride to the finish line, with director Zack Snyder stepping away from the movie during post-production following his daughter’s tragic suicide, and Joss Whedon completing the movie in his stead, while the rapturous critical and financial success of Wonder Woman earlier this year not only instilled hope that, after failures like Man of Steel, Batman v Superman: Dawn of Justice and Suicide Squad, the DC Extended Universe could get itself back on track, but it raised expectations hugely that this film could continue that hot streak.

But then, reviews started appearing online that labelled it as yet another failure, and that compared to Wonder Woman it was a huge step backwards in terms of quality and that the DCEU is pretty much a failure because of it. Okay, first of all, if you want an example of an actual failed attempt at a cinematic universe, just read up on the status of Universal’s “Dark Universe” right now, and then tell me that the DCEU is seriously in the gutter; and second, while Justice League is by no means perfect and it has a serious amount of flaws, it is actually a rather enjoyable and – dare I say it – fun movie that, if nothing else, represents a step in the right direction for DC movies.

It picks up where Batman v Superman left off, with Clark Kent/Superman (Henry Cavill) now dead and Bruce Wayne/Batman (Ben Affleck) trying to recruit a team of super-powered individuals to fend off an oncoming threat from beyond the stars. He’s already got Diana Prince/Wonder Woman (Gal Gadot) on his side, but it’s more the likes of Arthur Curry/Aquaman (Jason Momoa), Barry Allen/The Flash (Ezra Miller) and Victor Stone/Cyborg (Ray Fisher) who need convincing, and soon all of them must face off against Steppenwolf (Ciarán Hinds), a powerful being who’s come to Earth to collect a trio of “Mother Boxes” which can give him power to destroy the world.

I’m pleased to say that this is the plot, if only because it’s far more focused and straightforward than most of the other DC movies so far. For the most part, you can tell what’s happening and it’s not bogged down by needless filler that does little to further the actual story, while as simplistic and generic a “superhero-team-saves-the-world-from-big-bad-monster” as it is, you can at least follow it without much difficulty. At a brisk two hours – as part of a Warner Bros mandate after complaints that Batman v Superman was far too long – it gives us everything we need without overstaying its welcome, whether it’s character interaction or introducing new MacGuffins that can either help or work against our heroes. It’s evident which parts of the film Whedon added during reshoots, like the snippier dialogue and moments of humour, but when you can tell it’s purely Snyder it’s clear that he had taken past criticism to heart and at the very least tried to spice things up a bit with this one, especially seeing how it’s a property people have been wanting to see on the big screen for years. Say what you will about his movies, but there’s no denying that Snyder’s intentions have always been solid with these films, even though they haven’t always been executed properly, and Justice League is probably the closest he’s come yet to fully realising his vision of a more fun and light-hearted DC universe.

It’s also quite a joy to watch these heroes interact with each other, especially those who up until now have never featured in a major big-screen release. Affleck and Gadot both continue to be great in their respective roles as Batman and Wonder Woman, while Cavill finally gets to act like a classic version of Superman and not the mopey, sociopathic version of the character that Man of Steel introduced. Miller has some funny moments as essentially the comic relief of the film, while Momoa makes a strong case for his Aquaman to branch out into his own entertaining set of adventures, although it is Fisher who perhaps struggles the most in an underwritten part that doesn’t allow for much character development on his part, which is a shame because he’s quite integral to the movie’s plot, more so than even Batman or Wonder Woman.

However, there are plenty of things to criticise about this film, albeit not as much as some of the far lesser DC movies thus far. The most crucial is that, like everyone else is saying, the villain is pretty rubbish; I don’t know a whole lot about Steppenwolf from the comics, but I have a feeling he’s not just some big bad CGI monster who spouts nothing but stock Saturday morning cartoon villain dialogue all the time. He never comes across as a major threat to any of the League members, partly because the CGI on him is so poor – as are a lot of the effects in this – and also because we know he’s only there just so that they have someone to fight in the film’s climax. Whenever he’s in a scene, it always takes you out of the movie because he’s such a boring one-dimensional bad guy and you just want to cut back to whatever’s going on with the heroes, who are infinitely more interesting than this waste of effects work. On the plus side, he’ll be a valuable asset to the fantasy football league at the club for completely disposable comic-book movie villains, right alongside that elf guy from Thor: The Dark World and whatever it was that the Fantastic Four fought that said it was Galactus but bitch that wasn’t Galactus and you know it.

Overall, for as deeply flawed as it is, I found myself enjoying Justice League far more than I thought I would. It was a joy seeing these characters actually doing heroic stuff for a change in this universe, and the action sequences – as CGI-heavy as they are – are a ton of fun to watch, but most importantly it left me with a sense of hope that it can improve on itself even more, which is something none of the other DC movies outside Wonder Woman managed to do. I would seriously advise you to lower your expectations, because it may not be perfect but it is surprising in how much fun it can be if you accept it for what it is.

Justice League is a fun and enjoyable step in the right direction for the DC Extended Universe, although there are still a number of deep flaws to it that prevent it from being the break-out superhero hit that it could have been.