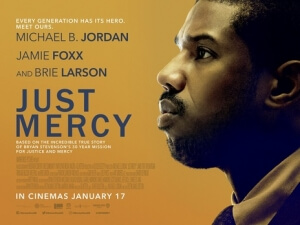 It’s easy to categorise a film like Just Mercy with other movies like Marshall and On The Basis Of Sex, in the sense that they all focus on the early careers of highly respected figures of law such as Thurgood Marshall, Ruth Bader Ginsburg and now prolific social justice advocate Bryan Stevenson, all of whom are depicted overcoming major obstacles such as racism and sexism to literally have their day in court.

However, Just Mercy rises above those other films in numerous categories; for one, it’s given a lot more poignancy and weight to it than the others, and for another it’s a very well-made drama with a lot on its mind as well as some brilliant performances that truly stand out in this already overcrowded awards season.

The film primarily focuses on Bryan Stevenson (Michael B. Jordan) who, after graduating Harvard, moves to Alabama where he becomes an advocate for numerous prisoners who have been placed on death row. One of his clients is Walter McMillan (Jamie Foxx), who some years prior was arrested and convicted of murdering a young white woman, despite flimsy evidence supporting the accusation and several members of Walter’s family saying he wasn’t even there when the murder happened. Bryan decides to take Walter’s case back to court, where he must prove that his original sentencing was unjust and even racially motivated, which of course in a small Alabama town where the residents and authorities clearly have prejudice on their mind attracts a considerable amount of attention.

Compared to those other recent films about prominent figures in the world of law, what this movie does very well is that it shows first-hand how the situation at play really does feel like it means something; not that the other movies didn’t shy away from their respective cases’ significance either, but this movie is made by people who clearly want to convey how what is happening has major implications going forward should it not be looked into. Director Destin Daniel Cretton allows us to see first-hand the psychological effects that being on death row can have on a prisoner, especially someone who should not be there in the first place; beyond Foxx’s character, you also have Rob Morgan as a prisoner who is locked up for an act caused by PTSD from the Vietnam war, and it is pointed out how he really should be in a hospital than awaiting his execution in a tiny cell, but because of the colour of his skin he has been deemed by the authorities that he is someone who does not deserve to live any longer. The movie spends a fair amount of time with these prisoners, and the more you get to know some of them the more you really don’t want them to meet their designated fate, especially Foxx who, aside from the fact that he clearly didn’t do what he was accused of doing, has a huge amount of empathy and compassion that any functioning person would immediately see is not the mentality of a cold-blooded murderer. The movie makes it clear that this central case is vital for the survival of at least one person who doesn’t deserve to be there, and it does an effective job of making you feel the sheer weight of it right away.

The cast is phenomenal, with powerful turns by both Michael B. Jordan and especially Jamie Foxx, and solid supporting roles for Tim Blake Nelson, O’Shea Jackson Jr., and Cretton regular Brie Larson as Stevenson’s closest confidante. They are all driven to some of their best work in ages by director Cretton, who makes up for the sappiness of his sophomore feature The Glass Castle with a return to form that’s among the most confident work the director has yet produced. That includes depicting brutal scenes of prejudice with all the intensity of a game of Russian Roulette, with Stevenson himself subjected to humiliating procedures at the hands of some white cops such as being forced to strip before entering the state prison, and later being pulled over and harassed by a pair of patrolmen for no distinct reason. He’s also not afraid to show the severity of the film’s more heart-breaking scenes, including an execution sequence that is simply haunting, with the excellent performances conveying the right emotions that anyone would be feeling if they were there to witness it in person.

It’s an inspiring story of righting a severe wrong, handling some heavy themes in a heartfelt manner with a firm grip, and portrayed wonderfully by a strong director and some excellent performances that deserve to at least be mentioned in the conversation. Definitely worth going to see if you can stomach watching some pretty brutal scenes of prejudice on the big screen, Just Mercy is a powerful drama that highlights a true injustice and the efforts taken to reverse it with a fresher, more progressive hand at the wheel. If you can, make sure you get a chance to see it for yourselves, because between this, Marshall and On The Basis of Sex, this one is probably the best entry yet in the Supreme Court Cinematic Universe (yes, I know Bryan Stevenson isn’t on the Supreme Court, but he can be the equivalent of Hawkeye or something in that Avengers-style team-up movie that they clearly have to make now…).

Just Mercy is a powerfully told story of injustice and the strong efforts made to right a severe wrong, handled brilliantly by director Destin Daniel Cretton who doesn’t shy away from the significance of the case at hand, and a slew of excellent performances across the board, particularly Michael B. Jordan and especially Jamie Foxx as Bryan Stevenson and the wrongfully convicted Walter McMillan respectively.

Want to decide what the movie’s like for yourself?
Check out Just Mercy showtimes in London
via