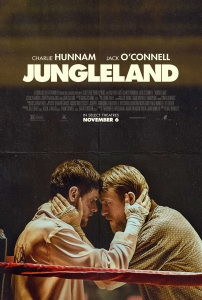 BASICALLY…: Two brothers (O’Connell and Hunnam) are struggling to make it big in the world of bare-knuckle boxing when they fall afoul of a dangerous gangster (Majors)…

Sports movies that really aren’t about sports are about as frequent as the ones that are about them. Rocky and Raging Bull, for instance, are at their core heavy dramas about the physical and psychological limits a person can place on themselves, and how far they may be willing to go to achieve personal glory; the lead characters just happen to slip on some giant gloves every now and then.

Since then, there have been countless films where any particular sport is a mere backdrop to the true emotional arc of the characters, and Jungleland certainly isn’t any different. It boils down to the execution, though, and director Max Winkler’s downbeat drama gets by with some real grit in its heart, along with some truly strong performances that easily carry the familiar script.

In the film, brothers Stan (Charlie Hunnam) and Lion (Jack O’Connell) are down on their luck, squatting in abandoned homes and barely earning change at a sweat shop. Stan, however, has faith in Lion’s talent for bare-knuckle boxing, working tirelessly to promote and train his younger brother so that they can achieve success, though it is often Stan who is the one pushing Lion into these matches, in a sibling relationship where the eldest clearly has control over both of them. However, after an unexpected loss in the ring, Stan becomes indebted to local gangster Pepper (an underused Jonathan Majors), who has a proposition for the two of them: transport a young woman named Sky (Jessica Barden) over to Reno, Nevada – for reasons that gradually become very apparent – and Pepper will enter Lion into a bare-knuckle tournament in San Francisco called Jungleland, which comes with a $10,000 cash prize. The three soon set off on a cross-country road trip, where the brotherly bond is tested as Lion begins to realise his older brother’s grasp on him.

While it’s certainly nothing that hasn’t been done before, Jungleland is admirable in its ability to just about stick the landing when it comes to its characters and its drama. Director and co-writer Max Winkler – and yes, he’s directly related to The Fonz himself, Henry Winkler – manages to go a slightly different path with the familiar conventions, bringing them in when they’re needed but not so much that it takes away from the central relationship between these two brothers. Winkler knows when to rein things in when they threaten to head into familiarity, ensuring that we do not stray from the film’s core emotional elements when they need to be front and centre. Throughout the film, you are able to identify with these characters and the decisions they ultimately make, even when you don’t exactly agree with everything they say or do, but you at least know enough about them to understand where they’re coming from. Their reactions and how they deal with certain crises are what Winkler and fellow writers Theodore B. Bressman and David Branson Smith are able to get the most out of a story which could have easily been just another story about two brothers and their shared desire for success in boxing.

If nothing else, Jungleland is a strong showcase for its actors to deliver some truly impressive turns that you might not have thought they were capable of. Charlie Hunnam, in particular, is great as the smooth-talking Stan, who adopts a wild charisma that makes you understand why he’s been able to score such reasonable deals for both himself and his younger brother, while also hinting at a buried insecurity for his own failures in life that have led him to use his brother’s natural abilities as a fighter. He is matched only by a couple of compelling turns by Jack O’Connell and Jessica Barden, the former expertly channelling a repressed if dim soul yearning for his own independence, as though Of Mice and Men ended with Lennie finally deciding to stand up to his brother George, and the latter bringing an unpredictable fire to an already flammable scenario which the actress manages to soothe before it gets out of control.

Jungleland is what it is, a familiar but also not exactly throwaway movie which does have ambition, which is especially evident in its performances and Winkler’s ability to get you invested in the drama without focusing too hard on the wrong elements. There are still plenty of films like this that are worth re-watching over this one – The Fighter and Warrior come to mind – but don’t put this film down for the count just yet.

Jungleland is a familiar set-up executed with grace by director and co-writer Max Winkler, who along with some great turns by Charlie Hunnam, Jack O’Connell and Jessica Barden gives the story the weight it needs.

Jungleland is now available on demand.