Jungle Cruise (Review) – It’s A Small, And Overly CGI, World After All 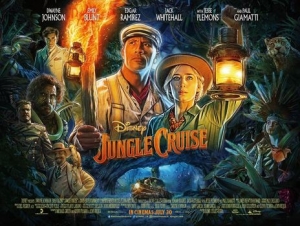 Disney’s habit of adapting their own theme park rides into big-budget blockbusters has often wielded mixed results, ranging from the mega-success of the Pirates of the Caribbean franchise to the awkward obscurity of The Haunted Mansion and The Country Bears (admit it: you forgot they were even made into movies, didn’t you?). Their latest attempt, this time with their long-running Jungle Cruise attraction, might not be as immediately disposable as the latter two examples, but it’s also not going to inspire a multi-billion dollar series either.

The long-in-development adaptation – which at one point had Tom Hanks and Tim Allen signed on to co-star for the first time in live-action – is set in 1916, when intrepid scientist Dr. Lily Houghton (Emily Blunt) and her brother McGregor (Jack Whitehall) venture to the Amazon in search of a fabled tree, which is said to grow petals that can cure any illness. They soon find a skipper to take them down the river, a man named Frank Wolff (Dwayne Johnson) who runs a series of naff tourist cruises on his riverboat, which amusingly incorporate a lot of the familiar stuff about the actual ride, from the fake threats to the terrible puns. The three of them head off on an adventure to find the tree, pursued by nefarious German Prince Joachim (Jesse Plemons) who wants to harness the tree’s power to help Germany win the Great War, and a band of ancient conquistadors who, centuries ago, were cursed by the natives after a brutal betrayal.

It’s all very Indiana Jones – and at times feels like filler until the now-in-production fifth Indy movie finally gets released – and you can tell that the filmmakers, among them director Jaume Collet-Serra, intending to make an old-fashioned action-adventure in the same vein as Romancing the Stone, The African Queen and, yes, any of the Indiana Jones movies. There is certainly a lot of energy that has been injected into Jungle Cruise’s veins, often moving rapidly from one big action set-piece to the next with barely a moment to breathe in between, which can leave you feeling pretty exhausted before the main characters have even left the port. Sometimes, it moves at such a speedy pace that you will often try to remind yourself of certain things that were introduced several sequences ago; the MacGuffin of the piece is an arrowhead that Blunt’s character keeps around her neck, and about an hour and a half in so much stuff had happened that I had completely forgotten why that arrowhead was important in the first place. Sometimes, you just need to let things unfold instead of moving immediately onto the next thing, and that applies to even the most outlandish blockbuster movie.

While the overall plot doesn’t get as needlessly complicated as some of the Pirates sequels – though it does get close, particularly as it stops at several points to provide hefty exposition about a character’s backstory, or where the X ultimately marks the spot – the movie does follow a very identifiable formula. From the constant playful bickering of the two main characters to the numerous inconveniences they face like rapids and waterfalls, Jungle Cruise floats in familiar waters when it comes to the typical action-adventure template; because of that, many of the surprises aren’t hugely surprising, and you practically see the direction of the plot from a good few clicks away. The characters are largely archetypes, from Dwayne Johnson’s big muscular hero with a checkered past, to Emily Blunt as the adventurous explorer dealing with the casual sexism of the day (a running gag has to do with people being constantly shocked by her wearing trousers), although the actors do have enough charm and charisma to carry themselves in a script that doesn’t get especially deep or even do a lot of new things to spice itself up.

With a film of this scale in this day and age, it’s a given that there will be a heavy usage of CGI over practical effects, which might not be preferred but is just the gold standard with most blockbusters nowadays. That being said, there is a LOT of CGI in this film; on the one hand, it helps bring to life set-pieces which simply couldn’t exist as an actual set, but on the other you’ll have lots of green-screen and entirely-CG leopards and snakes which don’t look entirely convincing. There are some cool designs every now and then, particularly with those of the cursed conquistadors, but you’re always aware that you’re watching a bunch of graphics rather than actually being sucked into this vast world you’re having an adventure in.

All of this just to say that Jungle Cruise is, simply, okay. It’s not a terrible film, because there is clearly a sense of fun and the actors do have a lot of charm to them, but it’s also something that, especially for a film that cost $200 million, could have done a lot more than to just be average. Maybe Disney’s just waiting to wow everyone with that It’s A Small World adaptation (come on, you know it’s only a matter of time).

Jungle Cruise is an energetic but ultimately average action-adventure which coasts on the charm of its lead actors, but suffers from playing things too safe with its plot and characters to truly be memorable.

Jungle Cruise is now showing in cinemas nationwide – click here to find a screening near you!

It is also available to stream with Disney+ Premier Access.