Jumanji: Welcome to the Jungle (Review)

Jumanji: Welcome to the Jungle (Review) 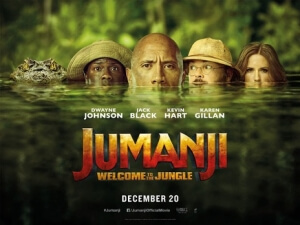 BASICALLY…: A small group of teenagers are sucked into a video game called Jumanji, and in the guise of their avatars (Johnson, Hart, Black and Gillan) they must venture through it if they are to escape…

For children growing up in the 1990s, there were plenty of family-friendly films they could become attached to and continue to hold a soft spot in their hearts for even to this day, whether it be films like Space Jam or Matilda or, in this case, the 1995 Robin Williams fantasy film Jumanji. There are plenty of people who harbour nostalgia for this film, and although I am certainly not one of them (I remember more about the animated series that spun off from it than the film itself) it’s fairly understandable why people have an attachment to it.

What isn’t so understandable, however, is the rather harsh backlash towards news that, more than twenty years later, a soft reboot was being planned by distributor Sony. Many people vocalised their distaste for this idea online, with some commenting how it was coming too soon after original star Williams’ passing, and that’s even after it added big names like Dwayne Johnson, Kevin Hart and Jack Black to the cast. It got a little out of hand – though nowhere near as bad as the Ghostbusters backlash last year – especially since I thought the original wasn’t really worth defending all that much to begin with, even though again I totally get why others are more attached to it, so I just resolved to wait for the film to actually come out before passing judgement.

So, was Jumanji: Welcome to the Jungle worth the backlash? No, it wasn’t, because it was actually a pretty fun action-adventure comedy that had a lot of enjoyable moments and, most importantly, never takes itself too seriously.

The film kicks off when four high school students – dorky gamer Spencer (Alex Wolff), football jock Fridge (Ser’Darius Blain), shy smartass Martha (Morgan Turner), and self-absorbed pretty girl Bethany (Madison Iseman) – share detention together, and come across an old games console with an even older game attached to it. That game is, of course, Jumanji which has somehow transformed from a board game into a video game cartridge, and once the teens pick their characters and start the game, they find themselves transported to the jungle environment of the game itself. Not only that, but they have been placed in the bodies of the very characters they chose – so Spencer is now the muscular, handsome Dr. Smoulder Bravestone (Johnson); Fridge is the pint-sized weapons valet Franklin “Mouse” Finbar (Hart); Martha is the scantily-dressed bad-ass chick Ruby Roundhouse (Karen Gillan); and Bethany is in the body of portly male cartographer Professor Sheldon “Shelly” Oberon (Black). They soon figure out that the only way to get back home is to play the game, which they attempt to dangerous and often humorous effect.

Even though I don’t remember a whole lot about the first Jumanji, I know enough about it to recognise that this one is a fresh new spin on the story, which works well in its own way. By placing the action mostly in the game itself, whereas before it was primarily in the real world, it feels genuinely different and offers a lot more comedic and creative possibilities, which to the credit of director Jake Kasdan he manages to take as much advantage of as possible. It may not be a consistent laugh-out-loud romp (then again, neither was the first one), but the comedy more often than not does land, especially as these teens in these highly exaggerated new bodies learn to get to grips with their new abilities and additional features (a running joke sees Bethany/Shelly reacting to a very male part of the body with odd fascination). The laughs are fairly frequent because the cast are so much fun to watch and have great chemistry with each other; Johnson and Hart continue to be a highly entertaining comic duo after proving to be so in last year’s Central Intelligence; Gillan doesn’t get enough credit for being a comic performer, but really should after scoring some of the biggest laughs in the film thanks to the actress’s impeccable timing and delivery; and Black all but steals the show in what has to be the greatest casting of his career (is it just me, or has Jack Black always had a bit of an effeminate voice? Well, it seems that casting him as a teenage girl trapped in a larger man’s body is friggin’ perfect).

As soon as they and the audience enter the game, we’re in for a fun and entertaining ride that never bogs itself down too much with the mythos of the game itself, because the script isn’t too interested in making it seem credible. There is a plot, of sorts, but it mainly serves as an excuse for a ton of fun action sequences and satirical pokes at common video game conventions, such as the background characters who say or do nothing other than what they were programmed to say or do, as well as the random cut-scenes that pop up out of nowhere. These are healthy signs that this is the kind of movie that isn’t taking itself too seriously, which is good because that allows the audience to just sit back and have fun with these characters and the setting rather than bury itself underneath so much unnecessary backstory or filler, a trap that so many big-budget Hollywood movies tend to do nowadays. In terms of problems, the only ones I’d really identify are that it perhaps could have been a little funnier, maybe taking a few more pokes at the gaming world or even one or two jabs at some of the characters’ expense, and at just under two hours it probably didn’t need to be longer than an hour and a half.

Overall though, I enjoyed myself at this movie more than I thought I would, which is almost enough for me to forgive Sony for The Emoji Movie… almost.

Jumanji: Welcome to the Jungle is a hugely fun and entertaining action-adventure comedy that takes as much advantage of its set-up and talented comedic cast as it can, and manages to succeed largely by never taking itself too seriously.