Jumanji: The Next Level (Review)

Jumanji: The Next Level (Review) 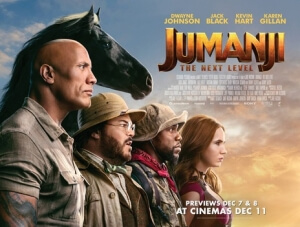 BASICALLY…: When their friend Spencer (Wolff) becomes trapped in the world of Jumanji, his friends must venture back to rescue him, only to find that several things about the game have changed…

Nobody expected a decades-late follow-up/reboot to the Robin Williams fantasy favourite Jumanji to be good, let alone be such an enormous box office hit that it would have more legs than even a Star Wars movie, but in 2017 Jumanji: Welcome To The Jungle surpassed all expectations to become a fun family adventure that almost anyone could get behind.

Trepidation does stir, however, for a sequel to the sequel that was fast-tracked in the wake of its success. With less than two years until the studio’s mandate of a late 2019 release (to once again compete with a Star Wars movie), there was less time for the filmmakers to get creative with how to further expand on the world and characters that had been set up in the last film. So, it’s a little disconcerting that Jumanji: The Next Level does indeed do a Home Alone 2: Lost in New York and basically sticks all too close to the original formula – but the fact that it works just well enough as a fun, if not entirely necessary, movie in its own right is a minor miracle.

A couple of years have gone by since high school students Spencer (Alex Wolff), Fridge (Ser’Darius Blain), Bethany (Madison Iseman) and Martha (Morgan Turner) entered the world of video game Jumanji; they still remain friends, even with some of them at college or travelling the world, but Spencer – riddled with insecurity – is a lot more distant, obsessing over becoming his video game avatar Dr. Smoulder Bravestone (Dwayne Johnson) once more. When he suddenly disappears, the others deduce that he’s gone back into the world of Jumanji, which they seemingly destroyed at the end of the last movie, and are soon sucked back into the world themselves to find him. The problem? Well, there’s several; for one, the world itself has expanded from a jungle setting to many other things from a desert to a snowy mountaintop, and the game now randomly chooses the avatars for the gang, so while Martha remains as the tough Ruby Roundhouse (Karen Gillan), Fridge is now maps expert Professor Shelby Overon (Jack Black). However, the biggest obstacle is that avatars Bravestone and zoologist Mouse Finbar (Kevin Hart) are now occupied by Spencer’s grandfather Eddie (Danny DeVito) and his estranged friend Milo (Danny Glover) respectively, both whom having also been sucked into the game.

Plot-wise, the movie does follow similar beats to the previous film – the players have to get used to their wildly different avatars, they have to solve several of the game’s puzzles to advance further, and they must venture through several difficult obstacles while not using up their three lives, and so on – so anyone hoping that the film will do something different will probably be disappointed. It is more of an obligation movie than Welcome To The Jungle was, clearly made in the wake of its unexpected success whereas the other one was quite the gamble that ended up paying off, so while there is perhaps a little more confidence in the making of this movie there is also less of a genuine spark that made the previous film quite the surprise.

That being said, whenever the film works, it’s not just because of the effortless charm of its leads but also because of the comedy which, while not as strong as the first, does get a few decent laughs every now and then. Much of that comes from Johnson and Hart who are essentially doing impressions of Danny DeVito and Danny Glover respectively for the majority of the movie, and the two of them – Hart especially, who adopts Glover’s slow-talking mannerisms to a tee – are clearly having lots of fun aping these industry veterans. Likewise, Black and Gillan also appear to be having fun as they explore some of the new features that the game and their rejuvenated avatars have to offer, as do some of the newer additions like Awkwafina who shows up in a significant role later on in the film. Some of the action scenes also do their job well in creating both a level of entertainment and a fair amount of suspense (once you look past the blatant CGI on display, which like the previous film you can kind of forgive because this is all taking place in a virtual reality), like one sequence that involves a lot of rickety bridges and plenty more pissed-off baboons. Again, though, that comes from how likeable the main ensemble is and the fun vibes that they are constantly giving off throughout the film, even when from a script standpoint it does retread more than it probably ought to have.

It certainly isn’t the fresh, expansive sequel that some might probably be wanting from this movie (and were certainly not expecting the previous film to be), but for families around this time of year who want to just have a fun, mindless time at the cinema – and need their cinematic fix until Star Wars: The Rise of Skywalker comes out – then this just might be the formulaic, but serviceable, action-adventure that they’re looking for. As a movie itself, while it is certainly a flawed sequel, I found it to be a fine, completely inoffensive ride that I didn’t mind experiencing – but maybe, if they are going to do another one after this, they should really try to shake things up even more than they did for this.

Jumanji: The Next Level does suffer from repeating several plot beats from the previous entry, which might disappoint those hoping for something different this time around, but the charm from its main ensemble is still on display as is a sense of fun that, while not quite as strong as last time, should be enough to entertain audiences looking for an escapist action-adventure to pass the time until Star Wars: The Rise of Skywalker comes out.

Want to decide what the movie’s like for yourself?
Check out Jumanji: The Next Level showtimes in London
via