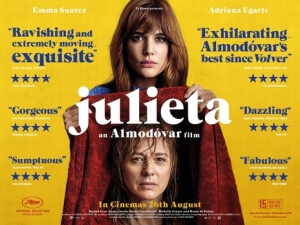 BASICALLY…: When Julieta (Suárez) learns that her estranged daughter Antía is missing, she ponders back to when she as a younger woman (Ugarte) raised her daughter and dealt with her own issues…

I must confess, I haven’t seen many of Pedro Almodóvar’s films. But I do hear good things about Talk To Her, Volver, All About My Mother, and tons of others that keep popping up on lists of essential Spanish-language films. The only one I had seen out of his filmography was I’m So Excited!, which from memory desperately wanted to be the next Airplane! but with much more sex in it, including the HILARIOUS act of rape!

Needless to say, I wasn’t a huge fan. But now having seen his newest film Julieta, it’s made me more eager than ever to go back and see more of his work, especially when they’re this intriguing and powerfully told.

The title character is played by two actresses, at two different points in time. Emma Suárez plays her at middle-age, when she is living in Madrid with her boyfriend Lorenzo (Darío Grandinetti), with whom she is preparing to move to Portugal. However, when she bumps into a childhood friend of her estranged daughter Antía, whom she hasn’t seen in twelve years, Julieta decides to stay in Madrid, and rents a small apartment in her former residence to write endlessly in a journal meant for Antía to read. This takes us into an extended flashback where a younger Julieta (now played by Adriana Ugarte) meets and falls in love with a man named Xoan (Daniel Grao) on a train, after she makes a decision that ultimately has fatal consequences. We see her going through life as Xoan’s lover, and eventually the mother of their child together, Antía, which comes with enough tragedy and heartbreak to lead her daughter to suddenly vanish from her mother’s life altogether.

Going in not really knowing what to expect, I found myself surprised by how attached I was becoming with this woman’s life story. It starts off very melancholic, and it leads you to believe that this is going to be very similar to one of those telenovela soaps you see on daytime television. Once it shifts the focus to when Julieta is a younger woman, however, things start to become more engaging, and you’re desperately eager to see whether or not her difficult life is going to have some sort of happy ending. Both lead actresses as the old and young versions of Julieta respectively give strong performances that are fundamental toward the empathy felt for this character, but for me it was Ugarte who left the bigger impression. Maybe it was because she has a little more screen time than Suárez does, but she truly captured the tragedy and pathos of her role, particularly when later scenes see her go through a bout of serious depression (a feeling which most of us, myself included, have felt at some point in our lives thus far).

Almodóvar also seems really enamoured with making it as beautiful a mini-tragedy as possible, as he and cinematographer José Salcedo (a long-term collaborator with Almodóvar) paint a glorious portrait of the Spanish landscapes, from the concrete jungles of Madrid to a little cottage with the most breath-taking view of the sea, which even in a storm looks absolutely astonishing. The film also features a nice, dramatic score by Alberto Iglesias, which is beautiful in its haunting melodies and also its ability to capture the right tone and mood for a particular scene (although it really just made me want to watch Tinker Tailor Soldier Spy again, since he also did the score for that as well).

I was very impressed with the quality on-screen, both in front of and behind the camera, and it has made me very curious to check out some of Almodóvar’s previous films to see if they are as good, or even better (I predict the latter), than Julieta is. It’s a drama that hits all the right notes, you’re invested in what’s going on and who it’s all happening to, and it spoils the eyes with some gorgeous imagery.

Basically, far better than I’m So Excited! was.

Julieta is a gorgeous Spanish-language drama that features two solid lead performances, particularly from Adriana Ugarte, and some fabulous mise en scène by auteur Pedro Almodóvar, who clearly adores the language of film and uses it to its full extent with this engaging and emotional hit.