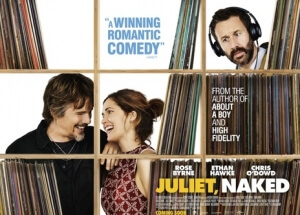 BASICALLY…: Annie (Byrne) comes into contact with American singer Tucker Crowe (Hawke), who her boyfriend Duncan (O’Dowd) is obsessed with…

Most rom-coms tend to go for the archetypical “love triangle” story, where one girl or boy must choose between two very different suitors if he or she is to have their own happy ending. It’s a cliché that some people either love or hate, but regardless of your opinion it has proven to be a formula that largely works for this genre, and has become a staple in nearly everything from Bridget Jones’s Diary to the Twilight series.

Sometimes, though, all we want is for someone to come and spice things up a little, doing things with the trope that you don’t usually see, or adding elements that make it all a bit more interesting. Juliet, Naked is a film that does exactly that, diving a little deeper into the love triangle formula than most other movies like it, and offering a more interesting take on it as a result. Luckily, it’s also a nice little movie that opens up several discussions about obsession, disappointment and past regrets in a safe-ish but rewarding manner.

Rose Byrne stars as Annie, a woman living in a quiet British seaside town who finds herself in an unfulfilling relationship with her long-term boyfriend Duncan (Chris O’Dowd). He’s not particularly affectionate, has no intention of having kids, and worst of all he’s in love with someone else; that “someone else” being Tucker Crowe (Ethan Hawke), an elusive American singer who Duncan is obsessed with, and spends most of his off-time talking to other Crowe fanatics online than with Annie in real life. When Duncan is mailed a rare acoustic version of Crowe’s most popular album named Juliet (this new version is subsequently titled Juliet, Naked), he is quick to praise it but Annie less so, to a point where she posts a negative review of it on Duncan’s website. That one review catches the attention of Crowe himself, who begins emailing her and starts a friendly conversation between them, which comes to a head when Crowe says he is visiting the UK and offers a chance for her to meet him in person.

You would expect the film to just solely be about how this woman suddenly finds herself being sought after by these two men, as it usually is with a love triangle plot, but the movie takes some very interesting turns before Crowe even comes to Britain, and before you know it the formula is shaken up quite a bit, with the focus becoming more and more on how these people are at stages in their lives where they must make some very mature decisions, and either fail to act on them or take that leap of faith based on personalities and histories they just can’t shake. We see how Annie is increasingly unsatisfied with her life, not just her directionless relationship but also how she feels the town she lives in isn’t really where she belongs; on the other side of the Atlantic, Crowe has become kind of a loser, living in the garage of a former lover, taking care of his young son and awkwardly welcoming his pregnant British daughter from another relationship, who has come for a short stay. Meanwhile, Duncan continues to fall deeper and deeper into his obsessive fandom, letting it destroy his own relationships and his own sense of morality as his entitled persona begins to consume him until he is no longer redeemable. What starts out as the set up for a standard love-triangle rom-com soon turns into something a lot more human and relatable, and I really admired the film for taking these leaps and not entirely sticking to the tried-and-tested formula that it’s working with. Even though it’s clear who you’re meant to be rooting for and against, there are tragic elements to each of these main characters that shape them into something that’s a little more three-dimensional than the standard rom-com ménage à trois.

Though it does go out of its way to shake up that particular rom-com formula, there’s really not much else to say about all the other ones that remain. This is the kind of movie that mostly coasts on the charm of its actors, particularly Hawke who never seems to give a truly bad performance in anything I’ve seen him in, because although the film is technically better written than a lot of them it still has a few noticeably stale rom-com clichés lingering about. There’s the misunderstanding, a third-act break-up, supporting characters that drift in and out to offer comedic advice and then disappear once more into the aether – Annie’s lesbian sister Ros (Lily Brazier) fits into that particular mould, as she seems to only exist to either brag about her relationships or be there at the pub for her sister – and a resolution that feels like it came from a much more twee and upbeat romantic-comedy. In many respects, this film does those things better than most, but whereas it did a lot of interesting things in an attempt to spice up the love triangle formula, I was a little let down by how it didn’t stray further with any of the other tropes of the genre.

Nevertheless, I did like this a little more than the average rom-com, with a script that somehow both takes the formula to new places while also staying exactly where it is, and good performances by strong actors like Hawke, Byrne and O’Dowd who really do make the film worthwhile based on their natural charisma alone. It’s not a film I would rush out to see again by any means, but for the most part I’m glad I saw it, if only for the one time; I don’t really grade films on this website, but if I did I would put this somewhere around a B or a B-, which I think is just about right for this particular film.

Juliet, Naked is a rom-com that admirably goes out of its way to shake up the love triangle trope that plagues most films of that genre, but largely coasts on the charm of its performers including an always-great Ethan Hawke, since the rom-com tropes that remain disappointingly aren’t shaken up as roughly.